It’s looking to be a good Cup this year. Fun to watch. My team isn’t in it so I cleaned out the downstairs closet.

That’s when I came across my remaining 100 or so Topps hockey cards. What a spectacular let-down.

I started collecting in the Twin Cities suburb of Mounds View in the late 1970s. My family lived remarkably—disturbingly—close to a 7-11. When I first began to buy the wax packs, the 1977-78 Topps set awaited me. I was six, I had no idea what kind of lasting impact these cards would have.

Back then, a player’s hockey card might be all you got of the guy. Maybe he’d appear in the papers once or twice, but it was the image chosen no doubt with total flippancy at Topps that became ingrained in your young mind. 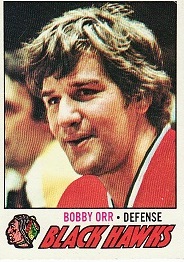 Is it therefore any wonder that my relatives could not convince me that this out-of-shape, baby-faced ‘Bobby Orr’ guy who I knew nothing of and never saw was all that great?

For goodness sake look at him. The clerk at 7-11 actually looked a bit like him.

I had been told he was a Bruin.

A hero in Boston. 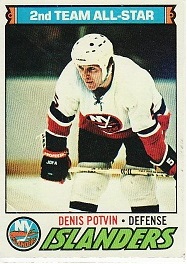 But Topps was already grooming his successors at the D position.

Look at the Islanders’ Denis Potvin. He looks positively gasssed!

This guy’s been battlin’ and hustlin’ and he’s ready for another face-off.

There’s nothing jovial about this warrior.

No wonder I hated Potvin when the Isles swamped Minnesota in the ’81 Cup Finals. 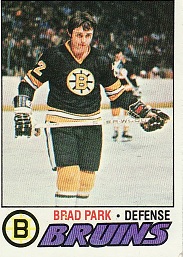 As for Brad Park …

Well to this day I’m not sure what Park is doing with his mouth, but at least he’s in motion.

Two hands on the stick.

Trying to climb out of Orr’s shadow, or so I heard. 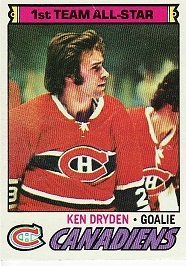 That year’s Topps set will soon show its Montreal bias, but it did not begin to do so in net.

What is the premier goalie of the decade doing?

Where’s the kick save? The lightning quick glove hand?

Today I would call this card ‘Ken Dryden, Contemplative.’ If he was already at work on The Game so be it, I’m six.

The only reason I bought into Dryden’s greatness was because he proved it every time Montreal played the North Stars. Ok, Ok, this guy’s good, I get it. 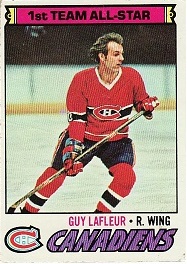 Enter the Montreal bias with one of the best cards in the set: LaFleur.

Look at his hair! I’d heard about that hair from radio play-by-play guy Al Shaver.

This is an action shot befitting the most exciting player in the league at that time.

Topps got one right. 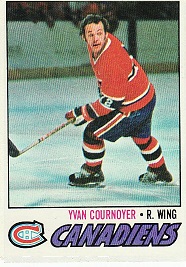 I pronounced it Ivan Cornower.

‘Unpredictable’ and ‘super-skilled’ and ‘fast’ are all over this card, just like his game.

Plus he was a lefty, like me. That went a long ways back then.

Whatever excitement Montreal brought to the rink, these next guys sapped it. 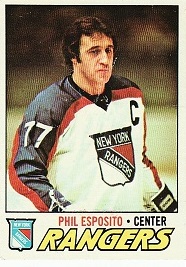 Because of this card, because my own father appeared to be in better shape than Esposito, I took a shine to Tony.

But this man looks uninterested.

Hey, I’m sorry the trade that sent you out of Boston didn’t work out, but why punish me? 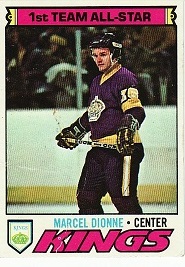 As another member of the lurking pot-belly line, Marcel Dionne’s card did nothing to enhance his status to me.

Not to mention I was a Minnesota Vikings fan.

Minnesota was purple. I didn’t know what this was.

But it wasn’t purple to me and I didn’t like it.

Plus, Los Angeles was a foreign country to me. 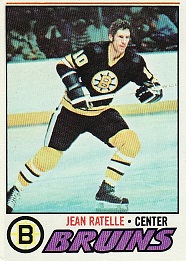 This needs little in the way of snark.

And Topps had to paint some action into his skates.

Well I’m six, I don’t know how he got that many goals but he must not be good anymore.

The same went for teammate Johnny Bucyk, who completed the Pot-Belly Line. 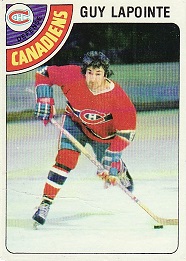 The game changer arrived in the following season set with serendipitous timing.

Look at that [Montreal bias] blast!

Guy-La-Point was my guy, because my first stick was a Canadien model #5 Guy LaPointe.

I- rather, Guy- cranked so many game-winners in my garage that season I surely lost count.

I have no doubt that this required some extra effort on the part of the Topps photographers, but it was worth it.

This wasn’t contemplating or being jovial or falling out of shape, this was hockey.

Regardless, all these players, all their achievements, for me call up these mental images. To this day. In an era before multi-media, you got one image and you ran with it. For all the nostalgia this post is oozing, I’ll take today’s thousands of images over one. 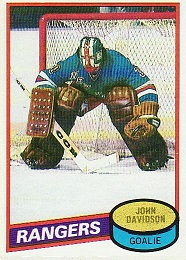 Although some cards made the era worth it.

As Topps would do back then, they included some trivia on the back of his card:

I would insert some more copy: “Although they’d really just prefer to win.”