Starting with the Eastern Conference, the majority of us had selected the New York Rangers to defeat the Ottawa Senators (18-12), while we were equally split on the Washington Capitals–Pittsburgh Penguins series (15-15). Of the 12 of us that predicted the Senators to win, five of us correctly picked the series length of six games (Will Billinghurst, Andrew Forbes, Judson Rempel, Shane Sander, and Jeff Hawkins).

The series that featured the Capitals and Penguins was much more difficult to predict, as the Capitals had another stellar regular season but have a history of collapsing in the playoffs. The Penguins, on the other hand, are dealing with a number of injuries which cast some doubt on their ability to win their second consecutive Stanley Cup. Although we were split on who would win this series, seven of us correctly predicted the Penguins being victorious in seven games (Chris O’Reilly, Shane Sander, Josh Boulton, Scott Kline, Thomas Conroy, Kyle Silagyi, and Louis Pannone).

As for the Western Conference, we favored the Anaheim Ducks over the Edmonton Oilers (19-11). Only four of us (Cam Hasbrouck, Jimmy Murphy, Brandon Share-Cohen, and Kyle Silagyi), believed the Ducks would win in seven games against the Oilers.

The Nashville Predators’ decisive series win against the Chicago Blackhawks inspired many of us to pick them in their second round series against the St. Louis Blues (23-7). In fact, 13 of us accurately predicted the Predators to win in six games (Andrew Forbes, Trevor Connors, Rich McGowan, Tom Dianora, Ryan Pike, Louis Pannone, Jimmy Murphy, Cam Hasbrouck, Dean Plunkett, Shane Sander, Will Billinghurst, Chad DeDominicis, and myself). 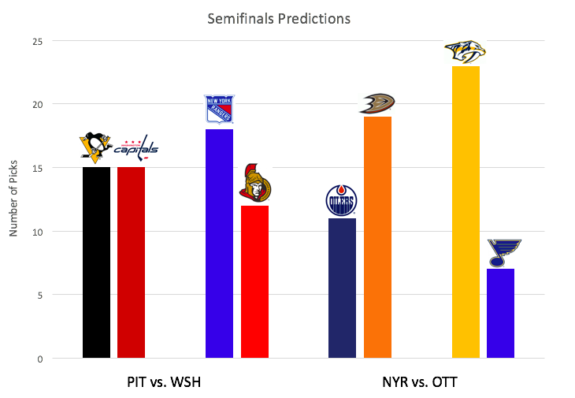 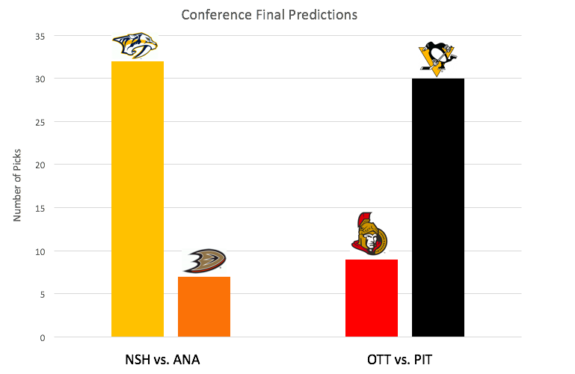 After defeating the Boston Bruins and New York Rangers in six games each, the Senators will move on to face the Penguins. The Penguins met the Columbus Blue Jackets for a five-game series, then battled the Washington Capitals in a seven-game series to advance to the Conference Final.

The Penguins finished the regular season with 111 points (50-21-11), which earned them the second seed in the Metropolitan Division. The Senators also finished second place in their division (the Atlantic Division), with 98 points (44-28-10). Since the Penguins accumulated more points this season, they will have home-ice advantage, even though both ended their seasons in second place of their respective divisions.

The Senators and Penguins met three times in the regular season, with the Penguins going 1-1-1 in the series. The Penguins lost both games at the Canadian Tire Centre, with one regulation loss and one shootout loss. Their one win in the series was an 8-5 victory at PPG Paints Arena.

In analyzing this matchup, it is important to compare the teams’ offensive generation from the 2016-17 regular season. The Penguins generated more shot attempts for during the season, as demonstrated by their 58.75 Corsi-for per 60 in comparison to the Senators’ 55.67. Also, the Penguins led the Senators in shots-for per 60 (33.34 to 29.81), demonstrating how more of the Penguins’ shot attempts translated into shots on goal. Additionally, the Penguins created a higher number of scoring chances (10.3 scoring chances for per 60 in comparison to 7.65).

Another offensive aspect in which the Penguins were superior to the Senators was their expected goals against per 60, as the Senators’ 2.36 trailed the Penguins’ 2.99. The Senators also had a lower goals-for-per-60 (2.09 to 2.87). Based on the regular season, the Penguins have an edge on offense.

The Penguins’ leading scoring this season was their captain, Sidney Crosby, who finished with 89 points (44 goals, 45 assists) in 75 games. Crosby finished second in points in the NHL, behind only Connor McDavid of the Oilers. The second-highest scorer on the Penguins was Evgeni Malkin who collected 72 points (33 goals and 39 assists), followed by Phil Kessel with 70 points (23 goals, 47 assists). Justin Schultz led the defense in points with 51 (12 goals, 39 assists).

Malkin is the Penguins’ leading scorer in the playoffs with 18 points (5 goals, 13 assists) in 12 games. Jake Guentzel (9 goals, 5 assists) and Crosby (4 goals, 10 assists), have scored 14 points each. Kessel has accrued 13 points so far. On defense, Schultz again leads in points with eight (two goals, six assists).

The Senators’ leading scorer was also their captain, Erik Karlsson, who scored 71 points (17 goals, 54 assists) in 77 games. Behind Karlsson were a number of forwards, with Mike Hoffman finishing second with 61 points (26 goals, 35 assists). Kyle Turris (55 points) and Mark Stone (54) followed Karlsson and Hoffman in scoring.

Karlsson leads the Senators in scoring in the playoffs as well, with 13 points (two goals, 11 assists). Bobby Ryan (four goals, five assists) and Derick Brassard (three goals, six assists) are tied with nine points each. Jean-Gabriel Pageau became a key player for the Senators in the postseason as well, as he has earned seven points.

As for their defensive games, the Senators and Penguins finished closely in the number of shot attempts they allowed. The Penguins had a slight edge with their 58.41 Corsi-against per 60 over the Senators’ 58.99. However, the Senators allowed fewer shots on goal against as quantified by their 29.69 shots against per 60 (compared to Penguins’ 31.54).

The playoffs, though, are a completely different animal, and the statistics exemplify that for this matchup. For example, the Penguins’ offensive generation has been much lower in the playoffs (Corsi-for per 60 of 50.37, while the Senators’ is 54.28). The Penguins have often been outshot in the playoffs but have still been able to win games. Their low 26.74 shots-for-per-60 shows how their shooting has dropped in the postseason. The Senators have been more successful in getting shots on net, as their shots-for-per-60 is 28.8. However, the Penguins still have been superior in scoring chances for per 60 (8.08 to 6.34), expected goals-for-per-60 (2.42 to 1.96), and actual goals-for-per-60 (2.59 to 2.26).

The Penguins’ defensive play has also suffered in the playoffs, which may be because of the injuries they have dealt with, including those to Kris Letang and Trevor Daley. Their Corsi-against per 60 is the highest of any team in the postseason (69.24), while the Senators’ is lower at 54.28. The Senators have allowed fewer shots against per 60 as well (28.48 to 34.72). But the Senators have allowed more scoring chances against in the playoffs (8.49 scoring chances against per 60 compared to 8.29).

Even with the Penguins’ lesser defense, they have been successful thanks to their goaltender, Marc-Andre Fleury. Since Matt Murray, who took over as the Penguins’ starter last year in the playoffs, was injured prior to Game 1 of the quarterfinals, Fleury has resumed the position as starter. Murray was able to backup Fleury in Game 7 against the Capitals, so if necessary, the Penguins do have a capable tandem.

With all of that considered, our final vote is 30-9 in favor of the Penguins. We did underestimate the Senators in the last series, but there is a more overwhelming support for this series for the Senators’ opponent than there was  in the last. The prediction that has the most support is the Penguins winning in six games, with a count of 18 votes. 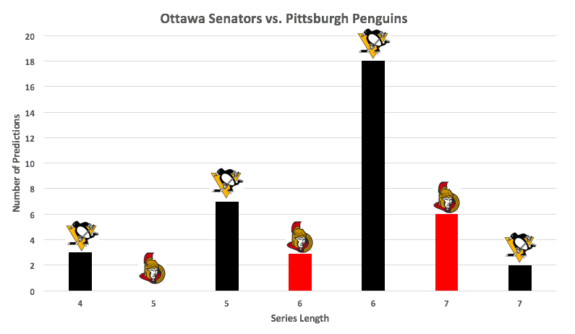 The Anaheim Ducks and Nashville Predators both started their 2017 Stanley Cup Playoffs with a sweep. The Ducks swept the Calgary Flames before defeating the Edmonton Oilers in a hard-fought seven-game series. The Predators moved from one division rival of the Blackhawks on to to St. Louis, which required six games to advance to their first-ever Western Conference Final.

The Ducks won the Pacific Division with a 105-point season (46-23-13). The Predators defeated both the first and second seeds in the Central Division after finishing as the second wild-card seed with 94 points (41-29-12).

During the regular season, the Ducks and Predators played each other three times. The Predators went 1-1-1 in this series, with both losses coming at the Honda Center in Anaheim.

Getzlaf also leads his team in points in the postseason. He has been dominant for his team, earning 15 points (eight goals, seven assists) in 11 games. Jakob Silfverberg has stood out for the Ducks in the playoffs as well, with 11 points so far, as has Rakell with 10 points. On defense, Shea Theodore has earned the most points (seven) so far.

Johansen (two goals, seven assists) and defensemen Ryan Ellis (four goals, five assists) lead the Predators in scoring in the playoffs with 9 points each. Josi and Forsberg have both scored eight points, while P.K. Subban has scored seven.

As exemplified by their playoff points, the defensemen are very active for the Predators. Their defensive numbers illustrate that as well. The Predators have a slight edge in the number of shot attempts against they limit, as demonstrated by their 55.51 Corsi-against per 60, compared to the Ducks’ 55.9. The Ducks allowed fewer shots against in the regular season, though, as their 28.79 shots-against-per 60 was lower than the Predators’ 29.77.

The Ducks will have the challenge of facing Pekka Rinne in net, who has been one of the most consistent goaltenders in the playoffs. Rinne leads the league with his .955 save percentage and 6.46 goals saved above average.

Based on their regular seasons and playoffs, it can be suggested that this will be a challenging series for either side. The Ducks has proven how resilient they are, while the Predators have shown how competitive all aspects of their team is. 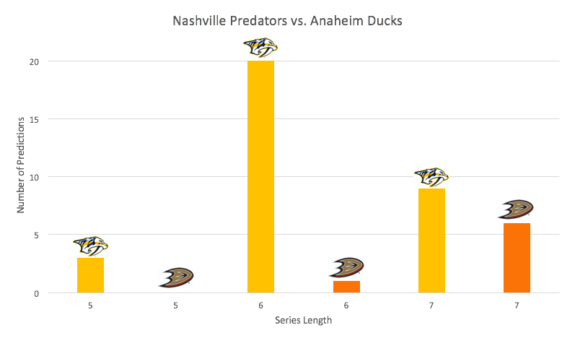 Based on our predictions, we at The Hockey Writers predict a Stanley Cup Final between the Pittsburgh Penguins and Nashville Predators.