Here at The Hockey Writers, we compiled predictions from 25 of our writers for the 2017 Stanley Cup Quarterfinals. We predicted both the winning teams, plus the series length. Our first-round predictions were broken down into two parts: the Western Conference and Eastern Conference.

In the Eastern Conference, the majority of our picks reflected the Pittsburgh Penguins, Washington Capitals, Montreal Canadiens, and Boston Bruins moving forward to the semifinals.

The Pittsburgh Penguins advanced past the Columbus Blue Jackets in five games. Our picks for that series were 17-8 in favor of the Penguins. However, only two of us believed this series would end in five games (Louis Pannone and Jeff Hawkins). The series length that received the most support (10 predictions) was six games.

The Washington Capitals were the clear favorites in our predictions, with 24 of us picking them to win the series. Our predictions certainly underestimated the Toronto Maple Leafs. Only one of us picked the Maple Leafs. While the Leafs may have lost this series in six games, every game in this series except for one went to overtime–demonstrating how capable they were against the highest-ranked team from the regular season. Thirteen of us picked the Capitals to win this series in five games, while the Leafs extended the series to six games. Seven of us accurately predicted a Capitals win in six games (Andrew Forbes, Donovan Burns, Jeff Hawkins, Jimmy Murphy, Jon Bateman, Trevor Beggs, and myself).

Based on our predictions, the Montreal Canadiens versus the New York Rangers was the closest series–with 15 picks for the Canadiens and 10 for the Rangers. Most of our picks reflected the idea that this would be a close, hard-fought series. However, the majority of us incorrectly selected the winner. For the predictions that supported a Rangers win, the series length was mainly split between a six and seven-game series. Five of us correctly predicted the Rangers winning this series in six games (Donovan Burns, Rob Soria, Ryan Pike, Trevor Connors, and myself). 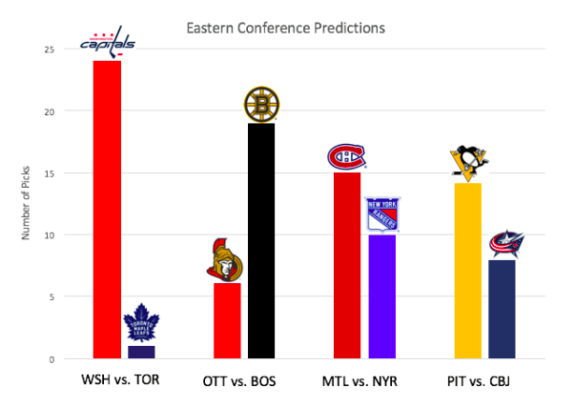 The 2017 Stanley Cup Semifinals in the Eastern Conference will consist of a Metropolitan Division matchup of the Washington Capitals and Pittsburgh Penguins, and an Atlantic Division matchup between the Ottawa Senators and New York Rangers. 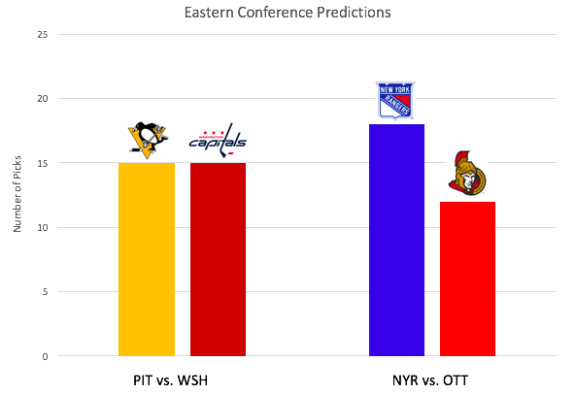 The Pittsburgh Penguins will travel to Washington to face the Capitals in the round two of the Stanley Cup Playoffs. The Capitals advanced to the semifinals after a six-game series against the Toronto Maple Leafs, while the Penguins won their series against the Columbus Blue Jackets in five games. The Capitals are the reigning Presidents’ Trophy Champions. Their 118 points were derived from a 55-19-8 record. The Penguins finished behind the Capitals, as the second place team in the NHL with 111 points. Their 50-21-11 record earned them the second seed in the Metropolitan Division.

The Penguins and Capitals met in the 2016-17 regular season four times, with the Capitals going 2-0-2. These matchups were often high-scoring, including final scores of 8-7, 5-2, and 7-1. Both of Washington’s overtime losses were in Pittsburgh at PPG Paints Arena.

The Penguins’ leading scorer, Sidney Crosby, finished the year with 89 points through 75 games (44 goals, 45 assists). He was second in the NHL to Connor McDavid (100 points) in points and was first in goals scored. Evgeni Malkin followed Crosby with 72 points in 62 games (33 goals, 39 assists). Phil Kessel also scored 70 points (23 goals, 47 assists) this season in 82 games. Their most offensive defenseman this season was Justin Schultz, who had 51 points (12 goals, 39 assists) in 78 games.

Through their first five playoff games, Malkin led the team with 11 points (two goals, nine assists). Kessel has scored eight points and Crosby has scored seven so far. As for defensemen, Ron Hainsey, Ian Cole, and Schultz are tied with three points each.

The leading scorer on the Capitals in the regular season was Nicklas Backstrom with 86 points (23 goals and 63 assists). Backstrom was the fourth leading scorer in the NHL this season. Behind Backstrom, Alexander Ovechkin scored 69 points (33 goals, 36 assists). Evgeny Kuznetsov finished the season with 59, Marcus Johansson with 58, and T.J. Oshie with 56. Their leading scorer on defense was Matt Niskanen with 39 points (five goals, 34 assists), followed by John Carlson with 37 points (nine goals, 28 assists).

Oshie is the Capitals’ leading scoring in the playoffs so far with seven points in six games (three goals, four assists). Justin Williams and Backstrom both have scored six points. On defense, Kevin Shattenkirk has totaled three assists thus far.

The Capitals have had impressive goaltending all season, thanks to Braden Holtby. He appeared in 63 games this season, going 42-13-6 with a .925 save percentage and 2.07 goals against average. He has continued his strong play into the playoffs with a 4-2 record through his six games, with the same .925 save percentage and a 2.36 goals-against average.

The Penguins have been dealing with injuries throughout the season, yet they have persevered in the regular season and playoffs. They are still without Carl Hagelin, Chris Kunitz, and Kris Letang, who were injured during the regular season. Hagelin has resumed skating, but his status has not been determined yet. Kunitz is a game-time decision for Game 1 of the semifinals. Chad Ruhwedel also missed the series against the Blue Jackets with an upper-body injury and it is unclear whether he will return for this upcoming series. Lastly, it is doubtful that Murray returns for Game 1.

The Capitals had an outstanding regular season; however, they have had a tendency of impressing in the regular season and disappointing in the postseason. Additionally, their recent history against the Penguins in the playoffs is concerning. Their tight series against the Toronto Maple Leafs also casts doubt against the Capitals. The Penguins, on the other hand, are dealing with a number of key injuries. Even though the Penguins have continued through those injuries, it is certainly something to consider.

With all of that considered, our predictions are split–15 of us predicted the Capitals, while the other half believes in the Penguins. Those that selected the Penguins are split between this series going to six or seven games. The prediction that has the most confidence from our consensus is the Capitals winning in six games (which generated 11 predictions). 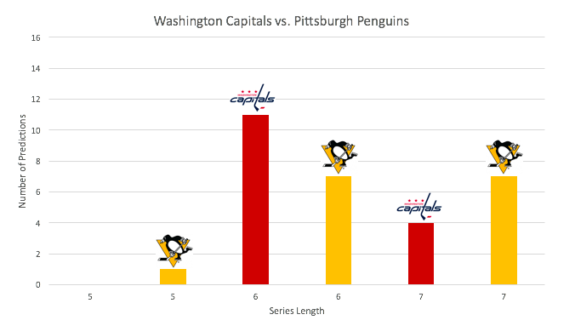 After a six-game series against the Montreal Canadiens, the Rangers will return to Canada to face the Ottawa Senators. The Senators defeated the Bruins in six games. The Rangers accumulated 102 points this season, with a 48-28-6 record. Even with 102 points, the Rangers only finished the season fourth in the Metropolitan Division, which seeded them as the first wild card for the playoffs. The Senators finished the season with 98 points, earned through a 44-28-10 record. As the second seed in the Atlantic Division, the Senators will have home-ice advantage even though the Rangers earned more points this season.

The Rangers and Senators met three times in the 2016-17 regular season, with the Senators going 2-1-0 in that series. The only Rangers victory was a 4-3 win on Dec. 27 at Madison Square Garden.

This will be a rematch of the 2012 Stanley Cup Quarterfinals. The eighth-seeded Senators extended that series to seven games against the top-seeded Rangers, but the Rangers ultimately won the series.

For this matchup, it is important to compare the teams’ offenses, as their structures are fundamentally different. The Rangers play a speed and skill game, typically using a 1-2-2 forecheck. The Senators play a more structured game with their 1-3-1 forecheck.

Derick Brassard, formally of the Rangers prior to being acquired by the Senators in exchange for Mika Zibanejad, is the leading scorer in the playoffs for the Senators with eight points. Bobby Ryan follows with seven points after only accruing 25 points in the regular season. Karlsson is third in scoring with six points, leading all Senators defensemen.

The Rangers’ regular season leading scorer is Mats Zuccarello. Zuccarello scored 59 points (15 goals, 44 assists), in 80 games. J.T. Miller came in second in scoring with 56 points, followed by Derek Stepan with 55. Chris Kreider was the leading goal scorer for the Rangers with 28 goals (and 53 points, which ranked fourth on the team). Their leading scorer on defense was captain Ryan McDonagh, who earned 42 points (six goals, 36 assists) in 77 games. Rookie Brady Skjei put up the second-highest points for a defenseman on the team with 39 points in 80 games.

Zibanejad leads the Rangers in points in the playoffs with four (one goal, three assists). Zuccarello, Jesper Fast, and Rick Nash have each scored three points so far. On defense, McDonagh and Skjei are tied with two points each.

The most important aspect of the Rangers’ game is their goaltending from Henrik Lundqvist. Lundqvist did not have his strongest season, going 31-20-4 in his 57 appearances with a .910 save percentage and 2.74 goals-against average. In the playoffs against the Canadiens, while featured in a goaltending duel with Carey Price, Lundqvist was exceptional. He went 4-2 in his six starts, with a .947 save percentage, 1.70 goals-against average, and one shutout.

This series between the Rangers and Senators is expected to be difficult for both teams, as their strategies and systems are bound to create problems for each other. The Rangers have to be aware of Karlsson, while the Senators have to try to solve Lundqvist. With all of that considered, we predict that the Rangers will defeat the Senators in the semifinals by a count of 18-12. Twelve of us have predicted this series extending to six games, with a Rangers victory. 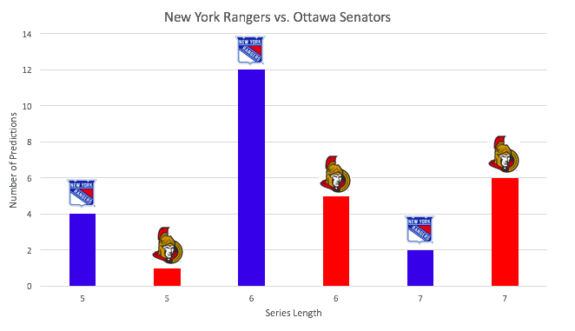 Based on our predictions, we at The Hockey Writers predict the New York Rangers advancing to the Conference Final. However, our consensus is equally split between the Pittsburgh Penguins and Washington Capitals for this series so we have not predicted an opponent for the Rangers in the Conference Final.