Last Spring, the Philadelphia Flyers and Montreal Canadiens beat up on each other in the Eastern Conference Final. This week, they took turns beating up on the Ottawa Senators. The Flyers sent the visiting Senators home with a 6-2 loss on Thursday and Montreal greeted them at Scotiabank Place on Friday evening and handed Ottawa a 7-1 loss. With only one win in their last 12 games, a 6-4 win over the New York Islanders on January13th, changes were certainly on the way in Ottawa, right?

Full credit for this breaking news goes to veteran Ottawa Sun columnist Bruce Garrioch – He has covered the team since day one and last night, he accomplished what every media person in the city, Sens fan and season ticket holder has been attempting to do for the past month, get a comment from team owner Eugene Melnyk. The silence about the direction of the team has been broken, but the paying customers in Ottawa may not like Melnyk’s answer. No changes are coming in Ottawa, Cory Clouston and Bryan Murray will finish the season as head coach and General Manager of the Senators. 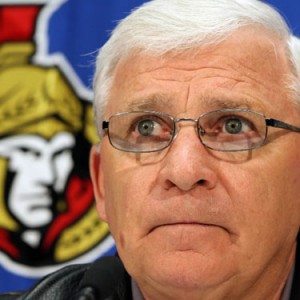 After a disappointing first half of the season on the ice and amidst grumblings from fans and season ticket holders about the direction of the Senators franchise, many believed that it was only a matter of time before the winds of change arrived in Canada’s capital. With the hurricane-force winds that have been raging around the team downgraded to a slight breeze by Melnyk’s comments, an already angry fan-base is being asked to keep spending on a team that is certainly heading into lottery pick territory.

As hockey-mad as Canada is, Ottawa fans have grown accustomed to winning; this year’s team is reaching lows not seen since their first few seasons as an expansion team. While it can be good if a team owner does not overreact and make moves simply because people demand it, what the fans in Ottawa wanted from a change at the top was hope; a reason to believe that this team is heading somewhere. As the important process of renewing season tickets begins, hope has become a four-letter word in Ottawa. The fans simply do not believe in the current coach and front office staff.

With their inconsistent play through 49 games this season and Murray’s inability to change the roster in the NHL’s salary cap era, Ottawa fans have already begun to stay away from Scotiabank Place. Fourteen points out of a playoff position and spending right at the salary cap maximum, Ottawa is at or near the bottom of the standings and every statistical category. The team is 27th overall in the standings, 29th in goals for, 27th in goals against, 29th in scoring 5-on-5, 22nd on the penalty kill, and their home record of 9-14-3 is the fourth worst in the NHL.

Perhaps Clouston is a victim of the roster Murray provided him, but there is no doubt the growing discontent amongst Ottawa hockey fans about his team’s effort each night has him on the hot-seat, or at least it did. Clouston must now finish the season with a group of players that know he is officially done at the end of the year. If finding ways to motivate his team was difficult before, it just became a lot tougher. The effort has been there on some evenings, but throughout the season, the Senators have failed to play a full 60 minutes. Defensive breakdowns and lack of goal scoring has the team in a tailspin, heading in the wrong direction. Even when the effort is there, the lack of goals has proved costly. Lately, the opposition has struck early and often against the Senators, leaving fans wondering just how prepared Clouston’s team is when the puck drops at the start of each game.

After a successful five years coaching in the WHL with the Kootenay Ice, Clouston joined the Senators organization as the head coach of the Binghamton Senators in the AHL in 2007. With the firing of Craig Hartsburg mid-season in 2009, the Viking, Alberta native was promoted to the NHL level for the first time in his career. His coaching record in Ottawa is 80-68-17.

Murray coached the Senators to the Stanley Cup Final in 2007 (a 4-1 loss to the Anaheim Ducks), and he moved to the GM’s office that summer – assistant coach John Paddock stepped behind the bench. A quick start and an appearance as a coach at the all-star game could not save Paddock as the team stumbled at mid-season – Murray replaced him after 68 games with a 36-22-6 win/loss record. During the summer of 2008, Craig Hartsburg became the head coach in Ottawa. That experiment lasted 48 games – Hartsburg was fired with a 17-24-7 record and Clouston was promoted from the AHL. The previous GM, John Muckler, assembled the group of players that went to the Stanley Cup Final. With Bryan Murray at the helm, the team has lost in the first round of the playoffs twice and with their record this year, they will miss the playoffs for the second time.

So, what is next for Murray and the Ottawa Senators? Evaluate the current roster and shed salary. The contracts of Alex Kovalev ($5million) and Pascal Leclaire ($3.8 million) will certainly come of the books this summer as they become free agents; Chris Phillips ($3.5 million) and Jarkko Ruutu ($1.3 million) may also leave via free agency. If he can find a trading partner for players like Milan Michalek (3 more years at $4.3 million), Sergei Gonchar (2 more years at $5.5 million) or Filip Kuba (1 more year at $3.7 million), Murray (or a new GM) will have plenty of cap space to change the direction, attitude, and the talent level of the franchise this summer.

One job Murray has accomplished while in Ottawa is restocking their AHL team in Binghamton. For the first time in years, the Senators have organizational depth, but unfortunately, there may not be an abundance of star power amongst that depth. Whatever happens between now and the summer, Murray’s challenge is to ease the minds of the Senators fans that have become unwilling to spend their hard-earned money on an inconsistent franchise spinning its wheels at the bottom of the NHL standings. It is not going to be an easy sell.