Even if the Detroit Red Wings are not playing in them, the NHL’s outdoor games remain special. These heavily promoted events are more than just two- or three-point contests in the middle of a draining NHL schedule; they present an opportunity for the game to return to its roots.

Winter Classic and Stadium Series games feel more like one-game playoff series. Neither team wants to lose in the spotlight – there’s a lot of pride at stake. Plus, it allows the players to take a trip down memory lane to the ponds they grew up skating on once winter rolled around. 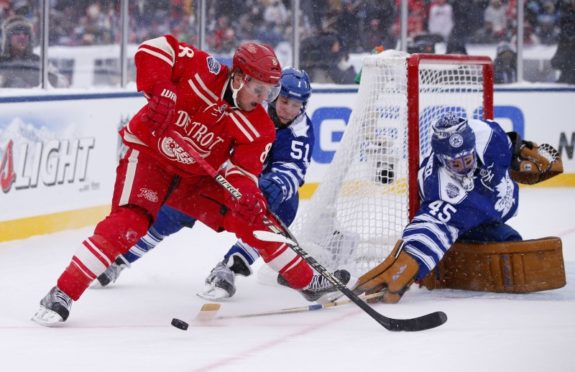 A Spartan in the middle of Ann Arbor, Justin Abdelkader thrived during the 2014 Winter Classic. (Rick Osentoski-USA TODAY Sports)

In fact, it’s pretty similar to those all-important pick-up/shinny games. Outside in the elements and all that matters is this one game.

So which of Detroit’s four* outdoor games was the best? Let’s look back at the handful of times the Red Wings were chosen to compete in the Winter Classic or other outdoor contests.

Even though the Red Wings made this one a game in the end, Toronto dominated pretty handily. Jared Coreau got the surprise start in net for Detroit after a December Jimmy Howard injury and Petr Mrazek’s failure to lock down the starting job. 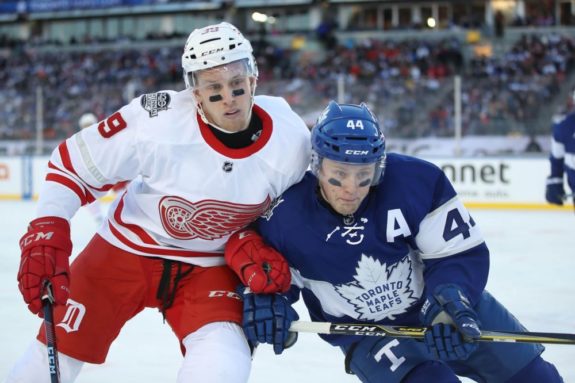 Anthony Mantha’s tying goal late in regulation was an exhilarating moment, but just one of the few times the Red Wings were in the spotlight. In the end, this game represented Detroit’s playoff-streak-busting season well: Somewhat competitive, tough to watch at times, and not enough firepower to win.

In all honesty, the alumni game was more exciting to watch, with the likes of Steve Yzerman, Joe Sakic, Darren McCarty, Claude Lemieux, and other rivalry players once again donning their teams’ jerseys. The Stadium Series game was fun, but not the center-stage contest that the two teams had previously competed in. And those games were indoors.

Colorado took the old-timers match, but the Red Wings avenged their predecessors in the second game. Tomas Tatar, Gustav Nyquist, and Justin Abdelkader scored in a back-and-forth game before Brad Richards’ last-minute goal and Darren Helm’s empty-netter sealed the victory.

If the Red Wings had won this game, it would have been No. 1 on this list. Unfortunately, this was during a time when the team wasn’t faring well. Jonathan Bernier outdueled his present netminding partner Jimmy Howard in a 3-2 win for the Maple Leafs. 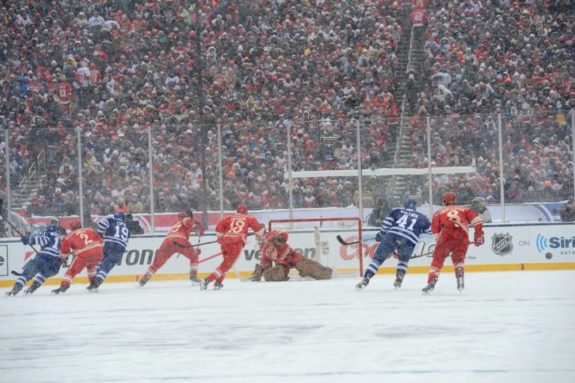 Detroit amassed 43 shots on Bernier, compared to only the 26 Howard had to face. Daniel Alfredsson scored in the first period and Justin Abdelkader knotted the game at two with just over five minutes to go in the third. Unfortunately for the Red Wings, Toronto’s Tyler Bozak’s shootout goal in the third round helped the Leafs walk off with a victory in Hockeytown.

Back when the Winter Classic had more selling power as a recently created spectacle, the Red Wings traveled to Wrigley Field to take on their Original Six rival. Detroit had just captured the 2008 Stanley Cup and the Blackhawks were a young team on the rise. It was the Chris Chelios Chili Bowl, with the game being played in the heart of college football bowl season.

Chicago took a commanding 3-1 lead, but the Red Wings stormed back to take the game 6-4. Detroit took the lead on a Pavel Datsyuk breakaway goal that left Cristobal Huet tangled up in the crease watching the puck slowly pass him by and into the net. Mikael Samuelsson, Jiri Hudler (twice), Brian Rafalski, and Brett Lebda also tallied for Detroit, with veteran outdoorsman Ty Conklin earning the win in net.

Always creative, Jack Adams arranged an exhibition game in a Marquette prison yard in 1954. That’s right – Gordie Howe, Ted Lindsay, and Terry Sawchuk suited up for a game against some of Michigan’s most dangerous felons.

Jack Adams, right, and Ted Lindsay, left, toured the Marquette prison before the Red Wings arrived for their contest.

It was reported that Detroit won the contest 5-2, though the actual score likely differed according to those who attended or participated in the game, with the Red Wings scoring much more than five goals.

You can argue that this game toughened up Hockeytown’s heroes – they’d win the next two Stanley Cups, and could have won a few more if Adams hadn’t broken up the band through a series of bad trades.

How would you rank the Detroit Red Wings’ outdoor games? Share your order below.