If the Stanley Cup Playoffs started today, under the current format the Montreal Canadiens would begin round one at home against the New York Rangers. The Rangers have more points, which means the Canadiens could possibly be the underdog even with the higher seeding. While the debate rages on about how to possibly avoid that type of scenario, is there a great equalizer that makes the point moot in the eyes of the red, white, and blue faithful? Regardless of where the teams finish in points, the Canadiens would have home ice advantage. Does that count for some sort of advantage?

Never Gonna Give You Up

Historically, home ice has been kind to the Habs in the regular season. According to NHL.com, the Canadiens have had a losing record on home ice just twice in the past 30 years. In fact, one has to go back 16 years to the 2000-01 season to find the last time that happened.

This accomplishment becomes even more remarkable when you consider that from 1986-87 to 2006-07, on average, 8.3 teams per season played under .500 hockey in their own rink.  That time frame involves eras where the NHL had as few as 21 teams. Aditionally, 20%-40% of teams were regularly underachieving every year at home all the way up to 2010-2011, and through it all the Canadiens made a point of pleasing their hometown crowd. 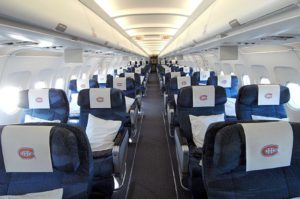 Over the past 10 seasons, regular season home ice advantage has become increasingly significant league-wide. Fewer and fewer teams are throwing away points to a guest. On average, a mere 13% of 30 NHL teams had a losing home record per season. In 2009-10, only the Edmonton Oilers had a home record below .500.

Here in 2016-17, there’s currently only two teams with losing records on home ice, the Detroit Red Wings and Colorado Avalanche. With Detroit sitting at only one game below .500, it could potentially be the second time in this decade only one team finishes with a losing record in their home rink. Home ice advantage has never mattered more, but does it matter as much in the playoffs?

Much Ado About Nothing?

IFor the Canadiens, it’s open to interpretation. Since 2007-08, they’ve played 13 playoff series, going 6-7 overall. As a higher seed starting at home, they’ve only won two out of six series’. As a lower seed starting away, they’ve won four of seven. This would indicate maybe familiarity isn’t a friend in the postseason. Yet they have an overall home ice record in individual games of 18-19 compared to 16-23 on the road, and five of the six series wins have come when the Canadiens have a winning home record. The series victories define this team as an upset waiting to happen on either side of the coin.