Entering Game 3, the Anaheim Ducks were behind the eight-ball after losing games one and two of their second-round matchup with the Edmonton Oilers at home. Before dropping two to the Oilers to start the series, the Ducks had not lost consecutive games at home since early March. After winning Games 3 and 4 in Edmonton, the Ducks head home for Game 5 with the series tied at 2-2.

Fans with long memories are likely experiencing a feeling of déjà vu. For those more casual fans among you, I’ll explain. The Ducks postseason aspirations have been derailed by a strange unknown phenomenon, resulting in a living nightmare which is best described as being similar to the hellish reality experienced by Bill Murray’s character in the movie Groundhog Day.

While the NHL’s postseason is not a world-shaping event, the Stanley Cup Playoffs may be more war-like than one could imagine, psychologically speaking. I say this cautiously, as there is nothing that compares to real war. However, there are similarities if kept in the appropriate context. The road to the Stanley Cup is a “war” consisting of several battles between opponents. It is physically demanding, both sides will suffer casualties as a result, and only the strength and determination of the men on the battlefield can decide who can press on.

The location and conditions of each battle will sometimes be far more favorable for one side than the other. The ability to achieve victory when these factors are not on your side is both a huge boost for the victorious side’s morale and a crushing defeat to the losing side’s morale. The warriors who decide the outcome of each battle must put the results behind them immediately, as one must never become complacent in victory, or self-doubting in defeat.

Leaders will be celebrated to the point of almost worship in victory and have every ounce of their effort scrutinized in defeat. Winning the war will earn the adulation of your supporters, the respect of your enemies and your name will be permanently etched in a sterling silver monument, commemorating your glorious achievement. Still, the memory of each win and each loss will be carried on in the minds of those who were there when it happened.

One of the greatest lessons I learned in school was that history will undoubtedly repeat itself. European history buffs know this perhaps better than anyone, having studied the failures of Charles XII of Sweden in 1707, Napoleon Bonaparte in 1812, Allied Forces in 1918 and Adolf Hitler in 1941. All were defeated as they advanced on the Eastern Front and history tells us that logistical failures, the Russian winter and a carelessly fast advance were all significant factors in their defeat.

However, this is hockey and it is just a sport, right? Well, of course, but the human mind can make and repeat mistakes when under intense pressure. Therefore, psychologically speaking, this 2016-17 Ducks team will be tasked with avoiding the fatal flaws of their past postseason runs. Otherwise, they will once again suffer defeat.

The Ducks have been struggling for several years to escape the cycle of postseason defeat that has kept them from returning to the Stanley Cup Final since 2006-07, despite being labeled a contender and sometimes a favorite to win the ultimate prize.

After missing the playoffs in two of the previous three seasons, the Ducks responded by winning the Pacific Division title in 2012-13. The Ducks split games one through four of the opening round of the 2013 playoffs with their opponent, the Detroit Red Wings. 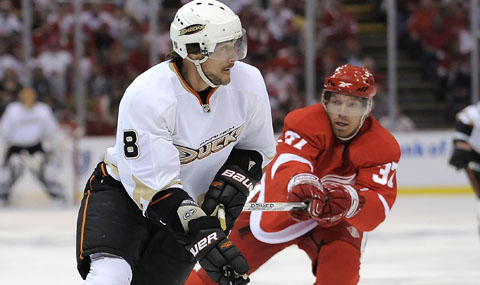 They secured a win on home ice in Game 5 and headed back to Detroit for Game 6 with a chance to advance. The Ducks lost a very close Game 6 in overtime, but headed back to Anaheim for the deciding game. The Red Wings clinched the series victory by defeating the Ducks in Game 7.

The Ducks won their second consecutive Pacific Division title in 2013-14 and once again split games one through four of their first-round series against the Dallas Stars. True to the pattern, they won at home in Game 5 and it appeared that they would fail to clinch the series on the road in Game 6. However, the Ducks would score two goals after pulling their goaltender with 2:14 left in the game and win the game just under three minutes into overtime.

The Ducks drew their crosstown rivals, the Los Angeles Kings in the second round. They would again split Games 1 through 4, after losing two at home and winning two on the road. A win on home ice in Game 5 gave the Ducks the opportunity to close out the series in Los Angeles but lost an extremely close Game 6 just as they did against the Red Wings one season prior. After a poor effort on home ice in Game 7, the Ducks were eliminated.

A third consecutive division title punched the Ducks’ ticket to the postseason as the top seed in the Western Conference in 2014-15. The Ducks managed to get through the Winnipeg Jets in four games and the Calgary Flames in five games, avoiding the late series games which they had struggled to win in previous years. However, the faced the Chicago Blackhawks in the Western Conference Finals, which most of the hockey world expected to be a long series. The Ducks split Games 1 through 4, though both losses came in very close game as they lost Game 2 in triple overtime, and Game 4 in double overtime. Yet again, the Ducks took care of business at home in Game 5, which was the third game requiring overtime in the series. The Ducks failed to advance to the finals in Game 6 and then lost at home in game seven thanks to a poor effort which was reminiscent of their Game 7 loss to the Kings a year prior.

I distinctly remember making a semi-sarcastic prediction while teasing my wife, a huge Ducks fan, following their elimination at the hand of the Blackhawks in 2014-15.  “Don’t be upset now, save it for next year. The pattern tells us that the Ducks will lose in the Finals, in game seven, on home ice.”

While struggling to sleep on the couch that night, I kept thinking about the long-term psychological effect that three consecutive years of being eliminated from the playoffs in identical fashion, in Game 7 on home ice could have on the Ducks players. It had to be emotionally draining to suffer these kinds of defeats repeatedly. The addition of Ryan Kesler prior to the 2014-15 season made them a much stronger team, but they lost yet another game seven. Kesler was no stranger to game seven losses on home ice either, having lost Game 7 of the Stanley Cup Final in 2011 as a member of the Vancouver Canucks.

The Ducks made it four straight Pacific Division titles in 2015-16 and drew the Nashville Predators in the first round of the playoffs. They dug themselves an early hole just as they did against the Kings in the second round of the 2013-14 playoffs, losing the first two games of the series on home ice. However, once again the Ducks bounced back and took Games 3 and 4 on the road, followed by a Game 5 win at home. Unfortunately, they were unable to clinch in Game 6.

Game 7 began with the dark cloud of self-doubt hovering over Honda Center and the Predators capitalized by taking an early two goal lead. The Ducks would dominate the remainder of the game but only managed to score a single goal. For the fourth consecutive season, the Ducks had won their division and been great at home all season, only to be eliminated on home ice in a deciding game seven. Bruce Boudreau was relieved of his coaching duties shortly thereafter.

The Ducks would hire a familiar face to replace Boudreau behind the bench, bringing back Randy Carlyle. Carlyle is well known for his focus on accountability, which the Ducks clearly needed if they were to shed the baggage which comes with playing poorly in game seven situations in the future. There was definitely some issues early in the season as players readjusted to Carlyle’ system, but a strong late season push led to the Ducks clinching their fifth consecutive division title in their final game of the regular season.

The Ducks drew the Calgary Flames in the first round, a team which had not won a game in Anaheim since 2004. Thankfully, that meant that the Flames would have the bigger psychological monkey on their back to deal with. The Ducks made quick work of the Flames, sweeping them in four games. The Oilers defeated the injury-plagued San Jose Sharks and headed to Southern California for games one and two.

Despite the return of the Ducks talented number one defenseman Cam Fowler, who had missed all of round one, the Oilers handed them their first consecutive losses on home ice in almost two months. The Ducks bounced back and evened the series with wins in games three and four on the road. Cue Twilight Zone music.

Have we been at this very location in time and space before? It sure feels like it.

Tonight, the Ducks and Oilers will square off in Anaheim. If I were a betting man, my money would be on the Ducks for Game 5. However, I wouldn’t exactly parlay that bet with either Game 6 or Game 7, and I most certainly wouldn’t let the winnings from Game 5 ride on the Ducks winning the series. The study of human psychology has proven that much of our thinking, decision-making, and tendencies are all based on past experiences, leaving us remarkably transparent if these patterns of behavior are known.

The Oilers haven’t had anything better to do but watch the playoffs on television for the last several years. Suffice to say, between that and the time the players spend analyzing video, the Oilers know the recent failures of the Ducks and likely know far more about the reasons why the Ducks have struggled in the later games of playoff series’ over the last few years than I do. The Ducks are going to need to have thick skin, be chirp-deaf, and exorcise their demons if they want to advance to the next round. I cannot emphasize the importance of exorcising their demons enough. The only other way around the mental baggage they’re carrying is to throw game five and take their chances in game six and seven, which isn’t something that’s going to happen in the sport of hockey, nor should it be.

Ducks fans should’ve started a GoFundMe crowdfunding campaign to pay for a team of psychologists and hypnotherapists a long time ago. This is Orange County, Lord knows there are plenty of therapists to choose from. Without professional help, the Ducks will have to survive a gut check that rivals that which was overcome by the Chicago Cubs recently. However, the dominance of their leader, captain Ryan Getzlaf, does provide some hope that they can and will succeed.