The Flyers are in need of more than just defensive support and overall team speed. They now find themselves looking to fill a void that will apparently be left behind by Steve Downie in the role of a power forward. While it’s not foolish to believe Jason Akeson could slip into Downie’s spot on a full-time basis, there is possibly another viable option for Philadelphia in unrestricted free agent, Dustin Penner. 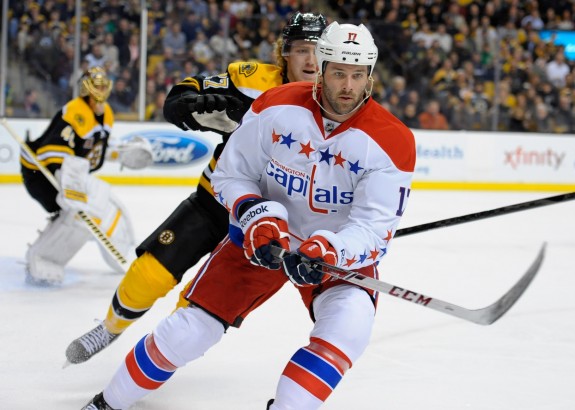 After coming off of a 35-point season, is Dustin Penner a viable option for Philadelphia? (Bob DeChiara-USA TODAY Sports)

Penner is coming off of back-to-back one-year deals with the Los Angeles Kings and Anaheim Ducks. But it’s not the length of these contracts that matter the most, although any short-term deal for a power forward in the NHL is a good one. It’s the amount of money Penner has made, and previously signed for, that make the idea of him joining the Flyers both befitting and feasible.

After wrapping up his entry-level deal with the Stanley Cup champion Anaheim Ducks in 2007, the team that initially signed him as an undrafted free agent, Penner signed a massive deal to the tune of five-years, $21.250 million with the Edmonton Oilers. It was there where he set a career-high in points with 63 during the 2009-10 season. Throughout his tenure in Edmonton, Penner was productive, scoring at least 2o goals in three of what amounts to over three and a half seasons.

In 2011, the Kings acquired Penner by sending Colten Teubert, a first-round draft pick, and another conditional pick to Edmonton. At the time of the trade, Penner had logged 62 games with the Oilers, scoring 21 goals and adding 18 assists. In his first 25 games with the Kings, though, which include the playoffs, Penner was anything but a scoring threat (more on that later). 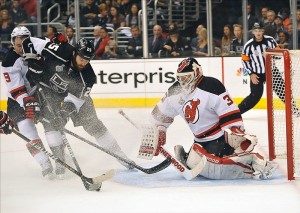 Dustin Penner’s track record in clutch moments are among other factors that make him a viable option in Philadelphia. (Jayne Kamin-Oncea-US PRESSWIRE)

Penner’s five-year contract expired after his heroics throughout the playoffs in 2012. Pleased with his performance as a King, he was re-signed to a one-year deal, worth $3.250 million. The Kings allowed Penner to walk at the conclusion of the 2012-13 season, after appearing in only 33 regular season games, due to salary cap reasons.

“It’s one of those cap things, and I guess it’s safe to say I have a limited amount of cap space left, and there certainly isn’t going to be enough to – I mean his requirements,” said Kings GM Dean Lombardi last July. “I talked to him the other day, and I just told him. I talked to his agent a couple days ago and [said] ‘This is where we’re at. I’ve only got X amount left.”

Which leads us to his most recent contract, one that he signed to re-join the Ducks. Like the one before, it was a one-year deal. But unlike his last one-year contract, it was for less money, signaling a decline in value on the market. And although the Ducks ended up sending Penner, along with his one-year, $2 million contract, to Washington at this year’s trade deadline to open up cap space, it certainly didn’t do Penner any favors in the effort of boosting that value coming into this offseason’s free agency period.

“I seem to be a traveling gypsy, no offense to gypsies,” said Penner before facing the Ducks as a member of the Capitals in March.

Words of a 31-year-old veteran who anticipates being on the move yet again. Perhaps this time, it’ll be Philadelphia?

A Viable Option For Philadelphia, An Experienced Winner

As a member of the Kings team that would go onto win the Stanley Cup in 2012, Penner didn’t have to be the scoring machine he was leaned on to be in Edmonton. Los Angeles nabbed the eighth playoff spot in the Western Conference and rode their balance and chemistry throughout the post-season.

With only 17 points throughout the 2011-12 season, Penner still contributed when it mattered most. One of Penner’s two game-winning goals came in overtime of Game 5 of the Western Conference Finals against Phoenix; the goal that sent the Kings to the Stanley Cup Final.

“It was a goal, I guess to sound really cliche, that was bigger than me,” recalled Penner.

Before being traded to the Capitals at the deadline this past season, Penner flourished in Anaheim with new linemates, Corey Perry and Ryan Getzlaf. Despite being hampered by nagging injuries throughout his second stint in Anaheim, Penner still posted 13 goals and 19 assists in 49 games.

“It’s not like a team is going to spend a lot of money on Penner considering how much his production has dropped — and some question his fitness — but on a cheap deal, he could be a good bet for some teams in a third-line role. If nothing else, Penner remains a physical player, bringing a little more to the table than just scoring.” — Brian Stubits, CBS Sports

That was written last July, before Penner ever logged a single minute in the 2013-14 season. While some may point to Penner’s three points in 18 games as a member of the Capitals as proof that his production has dropped, his contributions in Anaheim over a larger sampling size says otherwise. Additionally, Penner’s attributes weren’t properly tapped in Washington, as explained here:

“Blessed with a very big body, Penner is difficult to knock off the puck and is a looming presence around the net when he decides to go there. His production took a serious drop after arriving in Washington, mostly because of the way he was utilized. In 49 games with Anaheim, Penner averaged 15:15 in ice time, 3 minutes more a night than he received under Adam Oates in Washington. After putting up 13 goals, 19 assists and a plus-22 rating in Anaheim, mostly on a top line with Ryan Getzlaf and Corey Perry, Penner’s numbers dried up in Washington, where he was relegated to time with Tom Wilson, Chris Brown, Jay Beagle and Evgeny Kuznetsov.” — Chuck Gormley, CSN Washington

Although Penner’s career has had its share of up’s and down’s, it’s strenuous to think of a team that could use Penner’s game more than the Flyers. Their dump and chase scheme was often-time ineffective and lethargic, and they were common losers to battles for the puck in the corners and along the boards. With that type of grit, and a touch for scoring, it would be unimaginable to not assume GM Ron Hextall would at the very least inquire about the 6-4, 247 pound winger.

“With all of the decisions that Hextall gets to make as a first-time GM, he has a team that will expect to make the postseason again next year, yett he’s walking a fine line, fine enough that a few wrong decisions or even a couple of bad breaks could be enough to cost them.

“Of course, the flip side is that the Flyers are close enough that a few sharp decisions and a few good breaks could put them right back in the playoff mix again next season.” — Scott Cullen, TSN

Hextall used the platform of the press conference when he was named GM to reiterate how much he valued and thought of younger talent and draft picks. But with Steve Downie’s history of concussions, as well as his unrestricted free agency status, a veteran like Penner could protect the prized Sean Couturier, and further help him develop while adding more scoring than Downie ever did.

A Positive For the Dressing Room, Good For Laughs

The Flyers have demonstrated some of their own chemistry this past season, especially between captain Claude Giroux and rookie forward Michael Raffl. Giroux was heard giving Raffl a playful expletive during a post-game interview after Raffl potted a game-winning goal back in January. Adding a personality like Penner has the potential of being beneficial in regard to keeping the atmosphere in the dressing room loose.

Penner’s personality is anything but dull or plebeian. He’s a Twitter sensation, who has recently overtaken ESPN’s NHL coverage’s Twitter handle in this year’s Stanley Cup Final.

“Dustin is funny kid. I’m sure there will be some funny things coming out of his mouth,” said former teammate Patrick Maroon. “It will be great to play against him. You hate to see the fact that he was traded cause he was such a good guy. He was a great guy in the locker room. I’m sure we will have a lot of laughs out there if he’s going to be chirping.”

Even though Penner is a power forward past the age of 30 with a history of nagging injuries, there’s nothing that should hold the Flyers back from going after the two-time Stanley Cup champion. That is, if the price is right.

“I need a job,” stated Penner after the season ended. “I’ll entertain any and all offers.”

Let’s hope the Flyers are one of the first ones he hears from.