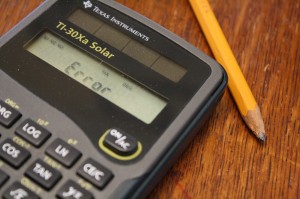 As the Pittsburgh Penguins prepared for the start of the regular season on Wednesday, 21-year-old Eric Tangradi was on cloud nine.  “I will be there tomorrow.  Nothing but smiles since I found out the decision [that he made the team].”

Within a few hours, Tangradi’s excitement was crushed as he was curiously demoted – and not just to the team’s AHL affiliate in Wilkes-Barre Scranton.  Instead he found himself off to Wheeling of the ECHL, only to wake up Thursday morning and be re-summoned by the Penguins in time for opening night at the CONSOL Energy Center.

When I spoke to the rookie forward on Thursday, he admitted the roster shuffle had left him a little confused, but also ready to hit the ice and put the situation in the past:

“There was so much excitement going into tonight and to hear that I was sent down was a little bit of a letdown, but you know, whatever they want.  I’m just here to play hockey and if they thought it was in their best interest to have me go down then so be it.  But I’m back here tonight and the fun stuff we talked about yesterday will come true tonight.”

In the aftermath, questions have circled as fans in Pittsburgh were left more disoriented than Tangradi about the moves.  Coach Dan Bylsma’s comments on the situation were brief on Thursday after practice, but the real answers are likely found in the 472-page behemoth known as the Collective Bargaining Agreement.

I’ve received dozen of questions and emails about the situation over the last few days, so I’ve decided it’s probably worth explaining the puzzle pieces, common CBA misconceptions, and the likely scenario that prompted the ‘Pittsburgh-Wheeling Shuffle’.

[Warning: For readers with no interest in the intricacies of the CBA or made queasy by the sight of a calculator, proceed with caution.  This will be mentally taxing.]

Wednesday 3:00pm – Regular season rosters must be set with no more than 23 active players and no more than $59.4m in salary.

Thursday 9:20am – “The Pittsburgh Penguins have recalled left wing Eric Tangradi from Wheeling of the ECHL”

Friday 10:40am – “The Pittsburgh Penguins have re-assigned goaltender Patrick Killeen to Wheeling of the ECHL”

How could the team demote a player who had spent all of training camp on the second line alongside Evgeni Malkin and Mike Comrie?  Could it be punishment for something off the ice?  Is the team that disappointed in his development that they bypassed Wilkes-Barre (AHL) altogether and sent him to Wheeling (ECHL)?

Questions and speculation have circled around Tangradi, but he’s likely just a complementary piece in this situation.  Focus instead should be on Jordan Staal and his struggles to return from a foot injury and infection.  On Wednesday the Penguins placed Staal on the Injured Non-Roster list which is simply a variation of the Injured Reserve status for players who fail training camp physicals or suffer injuries in the offseason.

After his return in the playoffs last season, Staal did not finish the year on Injured Reserve and therefore must be categorized as Injured Non-Roster.  This allows the team to replace him on the active NHL roster with another player, but both Staal and his replacement’s salaries are still included in calculating the team’s salary for cap purposes.

If the team feels that Staal will miss an extended period of time, they can also exercise a long-term injury exception to receive salary cap relief:

In the event that a Player on a Club becomes unfit to play (i.e., is injured, ill or disabled and unable to perform his duties as a hockey Player) such that the Club’s physician believes, in his or her opinion, that the Player, owing to either an injury or an illness, will be unfit to play for at least (i) twenty-four (24) calendar days and (ii) ten (10) NHL Regular Season games, and such Club desires to replace such Player, the Club may add an additional Player or Players to its Active Roster, and the replacement Player Salary and Bonuses of such additional Player(s) may increase the Club’s Averaged Club Salary to an amount up to and exceeding the Upper Limit, solely as, and to the extent and for the duration, set forth below…

Under the salary cap payroll system, this is the roster exemption commonly referred to as Long-Term Injured Reserve or LTIR.

This is an area that’s constantly misreported around the league when it comes to discussions about the effects of LTIR.  In most instances, reports refer to the salary/bonuses of an LTIR player as “coming off the books.”  The excerpt above explains that this is not the case.  Instead, the team is allowed to exceed the Upper Limit by a certain amount if they so choose and certain circumstances permit:

(iv) The replacement Player Salary and Bonuses for any Player(s) that replace(s) an unfit-to-play Player may be added to the Club’s Averaged Club Salary until such time as the Club’s Averaged Club Salary reaches the Upper Limit. A Club may then exceed the Upper Limit due to the addition of replacement Player Salary and Bonuses of Players who have replaced an unfit-to-play Player, provided, however, that when the unfit-to-play Player is once again fit to play (including any period such Player is on a Bona Fide Long-Term Injury/Illness Exception Conditioning Loan to another league), the Club shall be required to once again reduce its Averaged Club Salary to a level at or below the Upper Limit prior to the Player being able to rejoin the Club…

Naturally most will think this is just nitpicking and the effect of ‘coming off the books’ vs. ‘exceeding the cap’ is the same, but it’s actually a very important distinction.

Another misreported piece of Staal’s situation is the assumption that the team took this long-term injury exception on their Wednesday 3pm starting roster.  Nothing in the Penguins press release indicated this occurred and there’s a scenario that could explain why.

When it comes to utilizing the exception, a few options are explicitly illustrated and explained in the CBA.  Illustration #3 is what the Penguins were likely trying to accomplish [Note: SPC is Standard Player Contract]:

Waiting until Opening Day to exercise the exception on Staal has it’s benefits, as the alternate route in Illustration #4 demonstrates:

Illustration #4: The Upper Limit in a League Year is $40.0 million. A Player who has an SPC with an Averaged Amount of $2.0 million becomes unfit to play on the last day of Training Camp, and on the same day, his Club exercises the Bona-Fide Long-Term Injury/Illness Exception on such Player. On Opening Day, the Club has an Averaged Club Salary of $41.5 million (excluding Earnable Performance Bonuses up to the full amount of the Performance Bonus Cushion). The Club is deemed to have already fully replaced the unfit-to-play Player with any Player or Players on the Opening Day Roster. If these replacements are maintained through the conclusion of the season, the Club’s Averaged Club Salary is $41.5 million, as the Club is permitted to exceed the Upper Limit by $1.5 million because of the Bona-Fide Long-Term Injury/Illness Exception.

By exercising the LTIR option on Staal prior to Opening Day, the Penguins would have been submitting their roster under the assumption he had already been replaced.  In this scenario, with Staal earning $4m it would be in the team’s best interest to have replacement players with salaries totaling $4m in place.

The highest paid player not on the Penguins NHL roster is Brad Thiessen at $875,000.  Working him onto the team’s initial roster in place of a cheaper player would create very little benefit.  [For those interested in seeing Illustration #4 in action, review the Vancouver Canucks transactions on Wednesday.  Sami Salo began the season on LTIR and five players were shuffled to take full advantage of this exception.]

This makes Illustration #3 the most logical avenue for the Penguins to take.  It gives the Penguins the ability to utilize the LTIR relief throughout the season for as long as Jordan Staal is out of the lineup.. 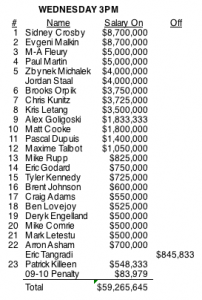 If the Penguins did in fact pursue Illustration #3, the image to the right is what the team’s payroll looked like on Wednesday at 3pm according to salary information obtained from Capgeek.com.

Swapping Tangradi for Killeen allowed the team to squeak in under this year’s $59.4m salary cap upper limit, while also delaying the LTIR exception on Staal until Opening Day on Thursday.

The next question becomes why Tangradi, and why Killeen?  As far as I can tell from my research on waiver eligibility (another article in itself), Tangradi was the only player on the Penguins who could be demoted without having to clear waivers.  Demoting anyone else would have been taking the risk that another team could grab that player.  That’s a risk the Penguins wouldn’t be interested in taking.

The final question I’ve received is why Wheeling?  Why not demote Tangradi to Wilkes-Barre before recalling him the next day?  Another misconception is that when a player is demoted, if his new team is not playing a game he doesn’t have to actually report to that city.

This isn’t the case and when you take into account that Wheeling is only 60 miles away from Pittsburgh (vs. 285 miles to Wilkes-Barre), it made more sense for Tangradi to report to Wheeling before returning on Thursday for the Penguins opener.

I’ll be the first to admit I am not an expert in the CBA, nor do I have intimate knowledge of the actual rationale for transferring Tangradi.  But anyone that’s followed the NHL over the past few months knows the great lengths that teams will go to save every dollar they can under the salary cap.  Vancouver GM Mike Gillis justified his moves by telling reporters it “provides maximum cap flexibility.”  In the end, that’s exactly what the scenario above would do for the Penguins.

A few readers raised concerns to me that the team was ‘up to something’ cap-related, but maybe didn’t want to admit it out of fear they’d be frowned upon by the league for circumvention.  The excerpts and examples I used can be found alongside plenty of additional light-reading in the CBA, which you can download here.

In my experience, the Penguins are one of the most upfront teams in the NHL when it comes to reporting personnel moves and contract details immediately after they occur.  As a fan if you feel betrayed by the team in a situation like this, just ask yourself how reasonable it is for a coach or general manager to read this article out loud at a podium.

13 thoughts on “What Really Happened With Eric Tangradi?”