As of late, Erik Karlsson’s play has been a mirror image of his Norris-winning year in the 2011-12 season.

The Ottawa Senators are currently climbing back into the playoff race and aside from the magnificent goaltending they’ve received, Karlsson is to thank for their recent surge. In 2015 alone, Karlsson has 22 points in 24 games and boasts an impressive +14 rating.

The Senators’ captain has had an up-and-down season, but there’s a multitude of reasons to believe he’s now back to Norris form.

Two times this season, Karlsson looked to benefit a great deal from a drastic change. Both coming around the same time, Paul MacLean was fired and Dave Cameron was hired in mid-December, and Marc Methot returned to the team in early January. 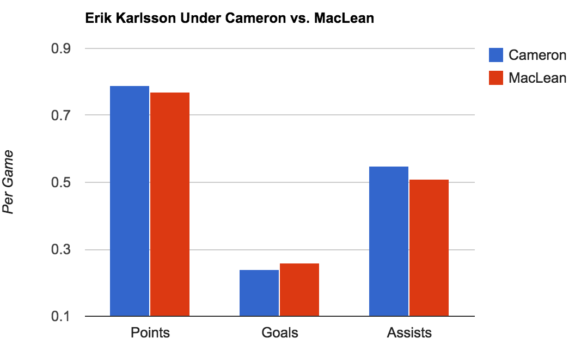 It was never really about Karlsson’s ability to make plays or put the puck in the net, though. Cameron was always focused on the defensive side of things with his captain. Essentially, he wanted Karlsson to keep his offensive touch, but be a bit more aware of the opposition. 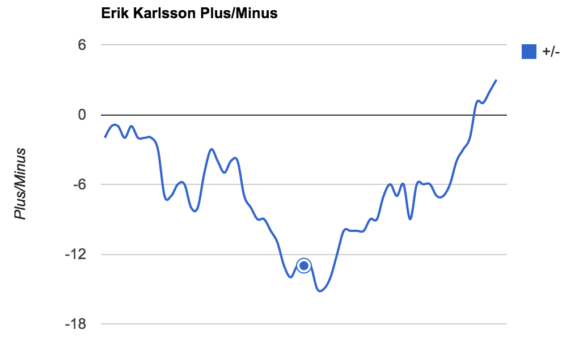 The blue dot is when Cameron was named head coach.

In the span of a few months, Karlsson has gone from a -15 rating to a +3. Plus/minus may be an overrated stat, but it’s got to be worth something in this case.

It’s black and white. Methot and Karlsson are a match made in heaven.

Though there are a few arguments that propose Patrick Wiercioch is actually a better partner for Karlsson, the Senators organization is fixed on having Methot on the first pairing.

No one should be complaining, though. With Methot this year, Karlsson’s production has noticeably improved. 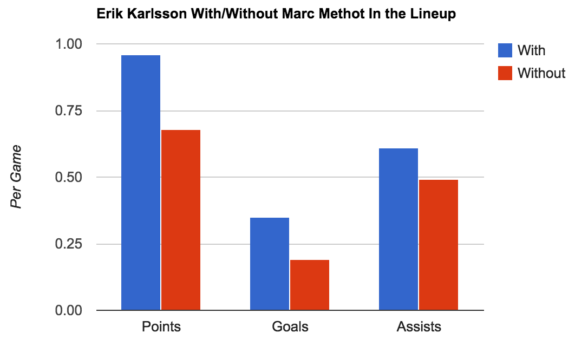 But maybe it’s not the coaching change and return of Methot that necessarily improved Karlsson as a player (stats thrown out the window). Maybe the 24-year-old has been back to Norris form since the start of this season, and the poor lineup decisions and overall quality of the team’s defence corps were just holding him back.

Having a solid partner and consistently being paired with said partner is exactly how teams utilize their top defenseman. But in Karlsson’s case, at the start of the season, he wasn’t yearning for a high calibre partner, he just wanted a competent one.

Since the Senators almost entirely refused to play Wiercioch alongside Karlsson, the Swedish superstar seemed like he was given a new partner every week.

Since Methot’s return, Karlsson has been continuously matched with him, but before, everybody got a turn on the top pairing. 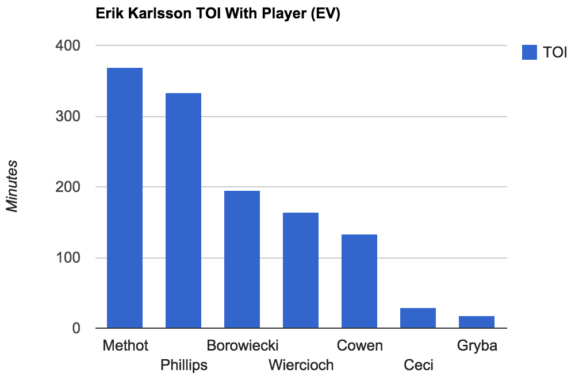 Just to put it into perspective how important a capable partner is, the Senators tried playing Karlsson with Chris Phillips for a total of 333 minutes this year. While Karlsson and Methot have a GF% of 68.75 together, Karlsson and Phillips’ was at a laughable 33.33%. Karlsson’s CF% with Methot is 55.26, while with Phillips it was 45.38.

And ever since Methot came back from injury, Phillips was constantly a healthy scratch, spending many nights in the press box.

One of the league’s best defensemen played 333 minutes with one of the team’s most likely healthy scratches. (Phillips has now been injured for a month)

A player like Karlsson can’t be playing with defensemen who would be on any other team’s bottom pairing at best.

You show me an elite defender, and I’ll show you a strong, reliable partner who they are constantly paired with. 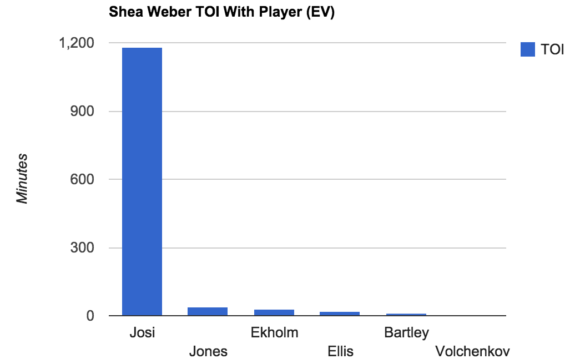 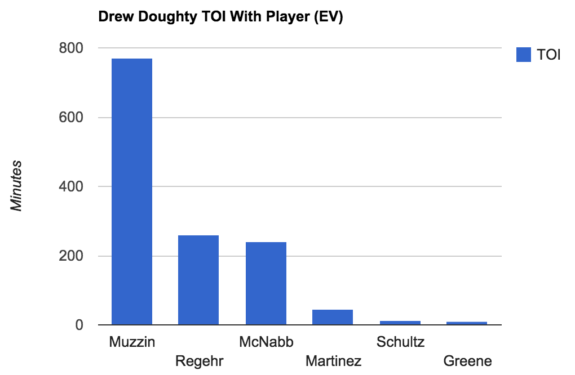 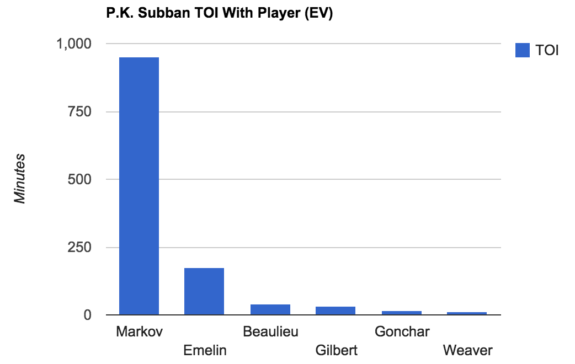 The best defensemen in the game are rewarded with an efficient partner whom they can rely on. Phillips can’t do that for Karlsson and neither can Mark Borowiecki or Jared Cowen, but the Senators insisted on stubbornly shoving incapable partners in Karlsson’s face.

Whether he’s been back to his old self for the entire season or he truly is just coming into his own, the fact is, Karlsson can finally again be seen as one of the top defensemen in the NHL and a leading candidate for the Norris for years to come.

Oh, and I think his achilles has fully healed.

This is what I was talking about. From a dead stop, after a full shift, Karlsson just blows by everyone. Not fair. pic.twitter.com/0cfEokS3Ze

Will he win the Norris this year? No. The injury trouble and coaching issues the Senators had earlier in the year took too much of a toll on Karlsson’s campaign. But does he take home the trophy if those problems are non-existent at the start of the year?