Hockey and video game fans alike have been given a special treat from EA Sports, the creators of NHL 16. The company released a limited beta for the game’s popular EA Sports Hockey League (EASHL) game mode for its Xbox One and PlayStation 4 players who had purchased NHL 15 the previous year. A code given to players of both consoles via email, players have the opportunity to play the beta from July 30 up until August 7.

Gamers who had the One and PS4 were extremely upset last season when NHL 15 came out without the EASHL game mode on the new systems but was placed on the Xbox 360 and PlayStation 3. Although EASHL in NHL 15 wasn’t much different from what was on the previous year’s game, gamers weren’t thrilled to be without one of the most popular game modes in the NHL games.

EA promised to not only return EASHL to NHL 16, but to improve it immensely, much like they promised the rest of the game. From game play to actual functions inside of EASHL itself, the beta has given fans a chance to experience NHL 16 firsthand before it hits stores, and also allows players to provide feedback while EA works out the rest of the bugs before the release date in mid-September. After playing the beta over the past few days, here is what I have found to be some of the best improvements to the game, and what could still use work. Thanks to fellow writer and gamer  Michael Straw for their input.

One of the coolest parts of EASHL over the years has been the ability to edit your skater or goaltender to make him or her look as much like you as humanly possible. EA has done a nice job of doing this, but they took it a step further this year. With complaints from game players about a lack of ability to edit current players in the game that looked nothing like the player in real life, the creators at EA made a concerted effort to open up editing for every player in the game. This has led to your capabilities in EASHL editing to be even more in-depth in NHL 16. 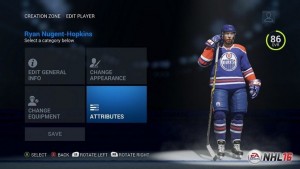 From stick tape patterns to different color shades of tape, making your player unique has never been this much fun. If you aren’t careful, you can spend hours on the beta simply messing around with your character and making it to your likeness. Details as precise as beard length and the addition of things like leg tape and skate guards are added into the beta to enhance customization even further than in the past.

Even the team you create in NHL 16 is given more uniqueness with the new system. Now Mike “Doc” Emrick and Eddie Olczyk have the ability to say the name of your team that is given by you when you create your EASHL team. From standard team names to ridiculous ones you and your friends can get extremely creative when you create you team and team name, while at the same time getting the name recognition on-screen from one of the best announcers in the National Hockey League.

One thing you won’t see on your player customization screen in NHL 16 is the attributes field. That’s due to the EASHL’s creation of player classes. EA has claimed that the addition of these 12 classes will put more of an emphasis on player skill and your abilities to play together as a team, creating a better competitive experience on the ice. In my limited playing time, I’ve only seen three or four of the classes be utilized, but I can already say that the player class system is a vast improvement to the game. If you’re a college student, like myself, you don’t necessarily have as much time to play EASHL and rank up your skater or goaltender, which put you at a severe disadvantage when you go online and play. Now with the class system, there is no need to worry about that anymore. On top of that, a sniper or playmaker does not have the same checking ability as a grinder or enforcer, making it much more realistic than in NHL 15 when a 5’9 winger was able to drop a 240 pound defenseman if he simply came at him with a great deal of speed.

Every team, no matter how much or how little you play, has the same 12 classes with the same statistics for each class. The emphasis is now placed on your abilities in-game and how well you work with your teammates as opposed to how many hours you log. Granted, playing more will make you and your friends better, but you won’t find yourself over matched due to experience points or having a less skilled skater than opposing players. In the four games I played on the first day of the beta, I went 2-1-1, with my only loss being 1-0 and my best win being 5-1. If you are a more skilled game player than your opponent you will most likely come up with the victory, which has not been the case over the past few years, and I think the casual gamer will appreciate that.

I think it was fair to say that the non-player controlled skaters in EASHL could used some work. Well early on it appears that the makers at EA have done a great job with that, improve the overall skill of the computer players. I first noticed a change when my team went onto their first penalty kill. One of my computer defenseman picked up the puck in the defensive zone and cleared it down the ice without hesitation. My computer generated winger then proceeded down the ice on the forecheck to pin the opposing team in their own defensive zone. Both of these things rarely happened with the AI computers, if at all, in previous games.

Along with more realistic game play and evening the playing field among players, it appears that EA also put a heavy emphasis on making the computer-controlled players on each team more competent. The computers appear to fill in the lanes on the rush better and are much smarter on the rush on whether or not to shoot the puck or pass it off (without having to call for it). Players classes and more intelligent computerized players in this beta alone have greatly improve the EASHL experience.

This game is not perfect by any stretch of the imagination. I admittedly haven’t tried playing in goal, which supposedly has vast improvements this year, or played as a defenseman, but from what I have done as a forward there are a few things that EA can work on before September.

EA has preached gameplay balance and more realistic skating in their videos leading up to the beta, but it doesn’t appear that it is fully operational just yet. Skating is certainly slower than it was in NHL 15, allowing for the more precise movements feature above, but the precision aspect itself still looks like it needs some work.

There also seems to be a bit of a delay between taking shots or making passes and them actually registering in the game. Sometimes shots were attempted on the controller but didn’t register on the screen. The same went for passes, and by the time they were made, if done at all, the play originally set up had already fallen apart. Also the board play in-game, which had seen significant improvements over the past two games, has seemed to have taken a step back in this beta.

But this isn’t a shock to the makers of the game. EA has come out and said that there are a few bugs that still need to be worked out and for gamers to be patient as they make these improvements in time for September. They are even leaving a feedback link on the beta for players to put in their suggestions on how to improve the game.

Provide your #EASHL Beta feedback to help us improve #NHL16 from now until launch. http://t.co/2HTXcKVRXE

Aside from giving fans of the NHL franchise a chance to try out their newest game, the release of the beta is also a way for fans to interact personally with the creators in order to voice their displeasure with the game before it comes out so they have a chance to fix it. This makes your input crucial to the success of NHL 16. Play the beta, see what you like and don’t like and submit that feedback to EA so they can have a chance to alter it before September.

Since this is just a beta that is being put out a month and a half before the game’s release, I will give EA the benefit of the doubt in that the skating will improve come the September and some of the other minor bugs noted above will be taken care of as well. Overall, though, I think that NHL 16, particularly EASHL, will be an enjoyable video game from the play-every-day gamer to the casual game player.