With all 30 teams having reached the 20 game mark, the unofficial quarter mark of the NHL season, it’s time to take a hard look at the story so far, surprises both good and bad, and who the early favourites are for the season end awards.

“Don’t look back. Something might be gaining on you. “
Satchel Paige

For a team which entered the season looking like the perpetual yard sale on some rundown local side street, this team has shocked with its performance thus far. Brian Campbell is having a career year, teaming with sudden wunderkind Jason Garisson (he of the 8 goals in 21 games) on defence, while Kris Versteeg and Tomas Fleischman have joined Stephen Weiss to form one of the league’s best lines. With Jose Theodore and heralded rookie Jacob Markstrom looking after the crease, the biggest question is will the secondary scoring pick up before it’s missed?

What do you get when you combine two consecutive first overall draft picks, another first rounder in his second year, a journeyman minor-league defenceman, a goaltender coming back from injuries and a stint in America’s weirdest jail after a DUI conviction, and an over the hill winger brought back to finish out his career in the city he began it in? Well, when those guys are named Nugent-Hopkins, Hall, Eberle, Potter (now on IR), Khabibulin and Smyth, you get a team which, while of late somewhat erratic, has shocked prognosticators who saw them as candidates for another top lottery position. After a skid that saw the team lose 4 straight, the Oilers are 3-1 in their last four, outscoring their opponents (all ahead of them in the standings at the time) by a combined 21-10.

With the return of Ales Hemsky, and the steady play of Horcoff, Gilbert, and Smid, this is a team that, while it will have its rocky points, is for real.

In August, the Stars were a team with out stars, owners, or hope. Now they officially have all three. Jamie Benn is a young star, Sheldon Souray is a re-established star, Kari Lehtonen is a goaltending star. And now Tom Gaglardi

is the Star(s) owner. Hope has returned to the Stars. But depth on defence is still a question needing answer.

Who are you, and what did you do with the real Leafs? Phil Kessel seems to have himself confused with Sidney Crosby, and Joffrey Lupul seems to think it’s fall 2001 and he’s in Medicine Hat. Tyler Bozak plays between them for a few games, and is apparently experiencing delusions of Doug Gilmour. Dion Phaneuf? Well, looks like Calgary lost another big trade.

With the team apparently recovering from a rough patch, the main questions facing the Leafs are centred on Luke Schenn’s travails and the odyssey that is James Reimer’s recovery from an “upper body injury” (Leaf-speak for a concussion – although that cat has long since left the bag).

Hart Trophy (MVP) – I will give two answers, one based on the idea of the leagues best player, the other on the definition of what the award is supposed to be about – that is, the player judged most valuable to their team.

For the “Best Player”, I have to go with Toronto’s Phil Kessel. He thundered out of the gate and kept going. In only 5 games did he not record a point. He’s the top goal scorer in the league, as well as amongst the leaders in assists. 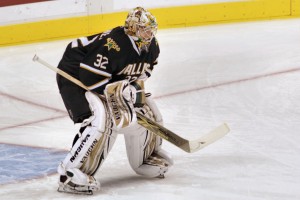 For the “Player most valuable to his team”, my choice is Kari Lehtonen, the star Star ‘tender. As mentioned before, this is a team that was expected to be in a desperate fight not to be last overall this season. But thanks in no small part to stellar (yes, another reference to solar bodies…) netminding by Lehtonen, the Stars are challenging for first in the Western Conference. This is a team that is still light in terms of talent, and as Lehtonen goes this season, so will the Stars. If he fades, then the Stars will fade into the night (Sorry, couldn’t resist). 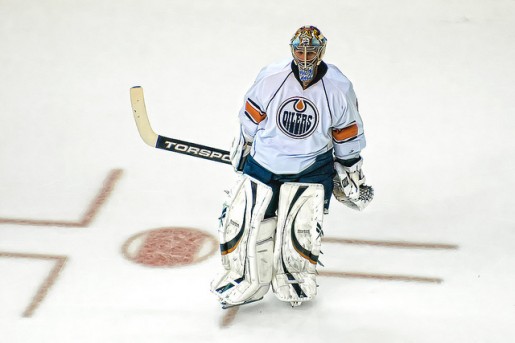 When you’re in the news more for your off ice antics and the price paid as a result… Suffice it to say that the ‘Bhulin Wall’ has had a less than impressive first two years in Edmonton, and he came into this season as the likely back-up to Devan Dubnyk. What a difference a month makes, as by the end of October he’d taken back the number one slot in the Oilers net, and reminded everyone of why he was signed to that contract a couple of years back. Behind an Oilers defence that can be erratic at times, and has missed number one defenceman Ryan Whitney for most of the season, he’s put up eye-popping numbers, and been the single biggest reason for the Oilers’ success thus far.

What can you say about a defenceman that is physically intimidating, can move the puck as a key part of his teams offence, is defensively as sound as a Canadian bank, and brings roughly the same presence to the ice as a main battle tank? When you’re as tall as Chara, maybe duck, or you’ll hit your head on the scoreboard. He’s simply the best defender in the league.

Not bad for a guy who was the subject of discussion and commentary based on a belief he would be one of the rare first-rounders not to make the jump to the big show as an 18 year-old. Better than a point per game played, leading all rookies in goals, assists, and points, as well as being top ten in points, top 20 in goals and assists, and top 25 in powerplay goals. He’s centred the Oilers’ top offensive line all season. The ‘Nuge’ has proved a lot of prognosticators wrong.

He eats up minutes on the penalty kill, wins faceoffs, takes a regular shift… The deal that brought Steckel to the Leafs from New Jersey is just another Burke deal that’s paying dividends this year.

When most of your off-season moves seem to be about just reaching the salary floor, there is no reason to expect a team to succeed. But Dineen has taken a team made up of odds, ends, and leftovers and led it to first in its division at the quarter mark. This is a team that is more than the sum of its parts, something for which Dineen deserves credit.