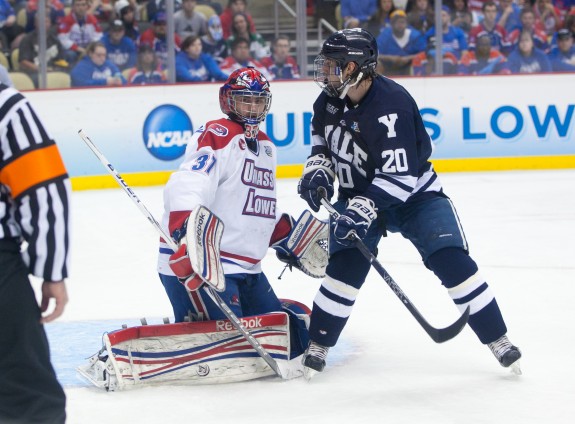 PITTSBURGH — Maybe this year’s Frozen Four should be renamed the Connecticut State Championship.

Yale and Quinnipiac, two ECAC rivals and Connecticut neighbors, will meet for the National Championship on Saturday at 7pm from the Consol Energy Center.

THW’s Shawn Reznik recapped Thursday’s semi-final games which couldn’t have been more different.  After a tight, back and forth battle between Yale and UMass-Lowell in the afternoon, Quinnipiac rolled to a casual victory over St. Cloud State in the evening tilt.

Let’s take a look at some of the interesting notes and storylines that have emerged from the Frozen Four so far.

~ Yale started and finished the game with a forecheck that UMass-Lowell just couldn’t handle.  “They played a great game tonight and we just didn’t have our legs first period,” said UMass-Lowell’s Riley Wetmore.  “We did have a good second and the third and overtime. They got a lot of shots on us and they found one that went in.”

~ Yale junior Jesse Root is a native of Pittsburgh, and played on the Mt. Lebanon state championship team in 2006.

~ UMass-Lowell scored twice in 14 seconds to tie the game at 2 in the second period.  “It’s happened so much in hockey,” said Root.  “We’ve all been a part of it for so long, playing the game for so long. We knew if we kept playing our game and just stuck to our game plan, the mood would never get real down.”

“They did to us what we normally do to teams.  They deserve all the credit.  They played a great game tonight.”

~ UMass-Lowell entered the game as one of the nation’s hottest teams, winning their past seven games.

~ UMass-Lowell players saw the Frozen Four as a great experience that should pay dividends next season as well.  “It’s going to give us a lot of experience.” said defenseman Zack Kamrass.  “We have a lot of guys returning next year. We have great leaders on the team, so they obviously gave us a lot to look up to with how to run the team properly, the coaching staff and everyone involved. It’s a great learning experience and something to build off of for future years to come.”

~ Yale was the final team in the NCAA field of 16 this year and have never been to the Frozen Four before.

“As a program, one of the things we want to be is about growth.  We want our players to get better as individuals each and every day, and we want our team to get better as a team each and every day.Early in the year, I thought we were pretty good.  And I told everyone that we’d be better in January than we were in December, and we’d be better in March than we were in January.  Because of the time and the focus and the energy that these guys put into it, that’s turned out to be true.”

~ Quinnipiac is 26-0-1 when scoring three or more goals this season.

I think we’d do anything to replace the first 10 minutes of the hockey game. We give Quinnipiac credit, and Samuels‑Thomas made two great plays to get in the lead.  They scored three of the first four shots.  We hunkered back down, but we just couldn’t overcome it.  And Hartzell was outstanding tonight.  That’s probably the end of the story, but it doesn’t tell the story of this hockey team.

That 11 minutes doesn’t define our hockey team.  They have tremendous heart and character.  They’re a hurting group.  They came here with heart today to get her done.  Eleven minutes weren’t very good for us.  They battled back like champions, and give Quinnipiac credit.

~ Quinnipiac goaltender Eric Hartzell has played 2462:38 this season, the most minutes for any netminder in Division I hockey this season.

I think it’s kind of a perfect storm.  Obviously, the experience, and we’ve played together for so long is a big part of it.  But we have a lot of forwards that kick into our defense.  Our system has obviously been working for us.  We love those.  We’re high octane, high pressure defense as a team.  I think it’s all just together.  The age, the experience and the systems together have just come together at the right time.

~ Quinnipiac will face Yale for the fourth time this season, having won the prior three meetings.

“We know that we are playing Yale and we beat them three times before. It’s hard to beat any team in the regular season twice and it’s crazy that we will meet them for the fourth time. It’s hard to go in and be over confident when you know you have a big matchup. They know us as well as we know them, we are only about 20 minutes apart. We are confident right now, we know we are scoring goals and doing the right thing, but so are they. It will be a good game.”