Here are your three finalists for the 2014 Hobey Baker award. [The Hockey Guys]

Paul Bissonnette vs. Mike Milbury. [Beyond the Benches]

Sidney Crosby became the first player in the NHL this season to score 100 points. There’s a good chance he’ll be the only player. [SB Nation]

Jonathan Toews will miss the rest of the regular season, but should be ready for the playoffs. Losing both he and Kane is certainly a worst-case scenario for the Hawks. [Yahoo Sports]

Habs defenseman Douglas Murray has a phone hearing for his nasty elbow to the head of Mike Kostka. [A Winning Habit]

Josh Harding is back at practice. [Minnesota Star Tribune]

David Clarkson’s contract is terrible. Everyone saw that coming except the Leafs GM, apparently. [Globe and Mail]

And no, the Leafs were never an elite team this season. [Toronto Sun] 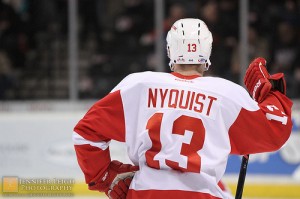 The Coyotes slim playoff hopes too a big hit last night against the Kings. [Five for Howling]

Dallas’ strong play might push them into the postseason afterall. [The State]

Alex Ovechkin quit on a backcheck? Say it isn’t so! [Washington Post]