It is amazing how fast time actually does go by.  When I noticed that Penguins goalie Marc-Andre Fleury won his 300th game I thought it was a typo.  How could he be at that number already?  Then I realized that he has played in the NHL for 10 seasons and he is on the Penguins so it all made sense.  Monday night the Penguins were on the road to face the Boston Bruins. 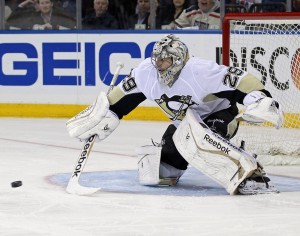 Sidney Crosby started to scoring for the Penguins netting his ninth goal fairly early on in the game, but the Bruins would answer with two of their own to take over the lead.  Evgeni Malkin would score halfway through the second period and the game would stay tied at 2-2 for the remainder of regulation and would wind up going into overtime.  I have always said that if a goal isn’t scored in the first two minutes of OT it would end up going to a shootout.  Malkin didn’t waste anytime as he scored :32 into the extra period to secure the milestone win for Marc-Andre Fleury.  Fleury turned away 27 of 29 advances by the Bruins picking up his 12th win of the season.

The Bruins were able to gain one point in the overtime loss to the Pittsburgh Penguins. [Boston Herald]

Penguins down the Bruins in overtime. [Pens Labyrinth]

The Islanders are really starting to make people believe that they are contenders with some convincing wins.  The team seems to be playing well together and it has obviously shown.  Monday night the task was the Philadelphia Flyers.  Sixty-five minutes of play apparently wasn’t enough as this contest would need to be decided in a shootout.  First things first though, both goalies were fantastic as Jaroslav Halak stopped all 21 shots he faced.  That wasn’t the entire story there, because on the other side of the ice, Flyers’ goalie Steve Mason stopped 46.

John Tavares would be the difference in the shootout as he would net the game-winning goal which secured their fourth win in a row, and nine out of their last 10.  The Islanders already have 30 points on the season a quarter of the way through.  They finished 2013-14 with 79 points.

Stephen Weiss was playing in just his second game of the season after battling injuries.  He made his presence felt in the second period scoring two goals with the second one being the game-winner.  Ottawa would battle back from a 4-1 deficit but would fall one goal short losing the game 4-3.

Gustav Nyquist scored his 10th goal of the season for the Red Wings and Riley Sheahan would add the other goal for Detroit.  Kyle Turris, Erik Karlsson, and Chris Neil would score for Ottawa in the losing effort.

“I always said it would take a bounce, something to go your way, and it starts snowblowing.  I got a bounce and hopefully it keeps going.” – Stephen Weiss on his two-goal performance.

Ottawa could only hold off the Red Wings for so long. [Ottawa Citizen]

Some “relief” for the Red Wings over the Senators. [Winging it in Motown]

Wild Too Much For Panthers

Minnesota would score two in the first, one in the second, and add an empty-net goal in the third to take down the Florida Panthers.  Jason Zucker would score twice in the victory and Nicklas Backstrom would turn away 29 of 30 shots for his third win of the season.

The Florida Panthers have now lost two in a row and three out of their last four, and the Minnesota Wild have won five out of six to get back within five points of first place in the Central Division of the Western Conference.