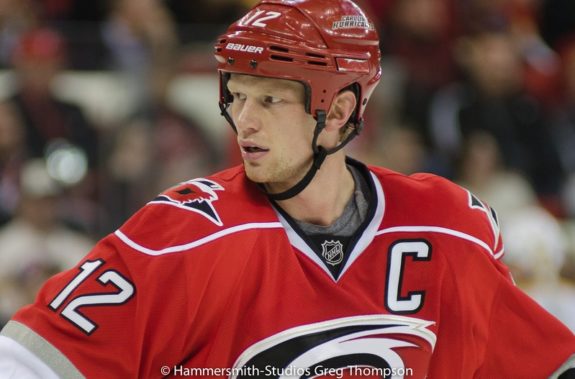 What the eyes see, the mind perceives. This is a universal observation that most people can attest to not only in hockey but also in life. In hockey, NHL players have many forms of deception on the ice in order to thwart the other team. In this case I am referring to how players fool us in our own assessments of them thus creating misconstrued representations of who they really are.

To begin our examination let us begin with Rick Nash. During the 2012 off-season there was no bigger traded player than Nash, and the price that it would cost to get him was rumored to be eccentric. Eventually he was dealt for Brandon Dubinsky, Artem Anisimov, Tim Erixon and a first round draft pick. The Rangers did receive a conditional pick and minor league defenseman Steve Delisle but they gave up a lot to get him just after making it to the Eastern Conference Finals. The Rangers did make it to the Stanley Cup two seasons later but you have to wonder if the addition of Nash truly helped the Rangers.

To begin with both Nash only had (39) points during the 2014 season while Dubinsky finished with (50) and Anisimov also finished with (39). In the playoffs Nash finished with (10) points in 25 games while Dubinsky and Anisimov had a combined (9) points in the six games the Blue Jackets played. Furthermore when comparing the Corsi numbers for Dubinsky and Nash there is not a major difference especially when you include Anisimov. Taking these things into consideration why did the Rangers go after Rick Nash when they were only six wins from a Stanley Cup in 2012?

The main reason the Rangers went after Rick Nash was simply because he was the best player on a bad Columbus Blue Jackets team. Still it is also more complicated than that. When a good player plays on a bad team, more often than not they will be elevated and appear greater than they actually are. What I mean by this is that because the Blue Jackets were so awful while he played there it appeared as if he was a superstar. Truth be told, Rick Nash is a good hockey player but the status he achieved while playing in Columbus was that of a top five forward in the NHL, when he never was. This is the illusion that led to such a high cost trade for the Rangers.

The reason why he consistently posted sixty point seasons is due to necessity, someone has to. If a team is not as good as the surrounding competition then someone will elevate themselves and pick up the slack. In this case Rick Nash who indeed was the best player on those Blue Jacket teams appeared better than he truly was. Goal scoring will not disperse among the lineup if the lineup does not have capable goalscorers and in this case the Blue Jackets did not have them. Also ice time has a major factor tied in with a surrounding cast. Nash average over 19 minutes of ice time in his last season in Columbus while only playing 17 minutes per game in New York in 2014 due to playing with better players. Looking back Nash was probably only worth Dubinsky and the first round pick, that is it.

The opposite is also true within the NHL. A perfect example is Tyler Seguin. In 2012, a 19 year old Seguin led the Boston Bruins in scoring with (67) points. The following season he finished in the top four in scoring before being traded to the Dallas Stars. The trade itself involved 7 players; Seguin, Rich Peverley, and Ryan Button to Dallas for Loui Eriksson, Joe Morrow, Reilly Smith, and Matt Fraser. It was a trade that shocked a lot of personalities in the NHL. If not for the inclusion of Smith the Bruins may be looking back on this as their worst trade since Joe Thornton. The biggest reason why Seguin was traded, other than his late night activities, was because of the depth the Boston Bruins had.

Unlike the Nash’s Blue Jackets the Bruins were a good team who won the Stanley Cup during Seguin’s rookie campaign. Due to the surrounding cast he was expendable despite his youth. Unfortunately, like Nash Seguin’s image was skewed because of the team he played on in this case downward. When there are numerous good players on a given team more likely than not, goal scoring will be spread around more. Though Seguin led the team in scoring he still finished outside the top 25 in the NHL. This gave the appearance of a good player when in fact Seguin has clearly shown his ability to be a great player. During his last season in Boston, Seguin averaged 17 minutes of ice time while averaging over 19 minutes of ice time in Dallas during 2014. At the time he may have not been the best player on the Bruins due to their depth but if he were on the team now it may go without question. This is how great players on good teams can often be undermined and eventually expendable. It is also why Seguin’s trade value was far lower than Nash.

In the end assessing players requires “watching the game” as well as good analytical knowledge and awareness of the team they play for.

Currently Eric Staal is the biggest name floating around NHL trade rumors despite playing on a team that has not been to the playoffs since 2009. He is only 29 and has led a healthy career but it would come as no surprise to see his production decrease if he is moved to a Cup contender.

1 thought on “How NHL Players Fool You”