I have always found it interesting how teams acquired the individual players that make up the team as a whole. Did they draft and develop them? Did they get chosen in free agency? Did the general manager make a big move to trade for them? Some teams are better at scouting players who would be a good trade option than scouting draft picks. Successful teams don’t seem to have a mold when it comes to how they were built so it really allows teams to be creative about making up their roster.

We’ve looked at the Central, Metropolitan and Atlantic divisions. Now it is time for the Pacific.

If you want see how teams in the Central were built, click here.

If you want to see how teams in the Metro were built, click here.

If you want to see how teams in the Atlantic were built, click here.

Goaltenders are included in the lists but are not factored in to the statistical analysis.

Another quick note, the Corsi-for-percentages are for even-strength and are only factored in for players who have played at least 100 minutes this season.

Los Angeles has drafted really well and it has helped them stay so good for so long. Most players have cap hits that probably don’t match the value they would get if they ever hit free agency. The one thing that could kill the Kings is the sheer amount of term they have locked in some of those “good right now” deals. They have seven total contracts that last at least until 2020 on the books now. They are all worth the money now, but that could get ugly down the road.

The draft picks of San Jose would have likely made up for quite a bit more of the scoring had Logan Couture not been injured for a good portion of this season. He’s played pretty well when he has been in the lineup. Pavelski is once again having an incredible season and once again, nobody is really talking about him. He’s my dark horse candidate for the Rocket Richard trophy and I would not be surprised at all to see him catch players like Patrick Kane and Jamie Benn in that race.

I wonder what this team could do if they spent even close to the salary cap. They are sitting in a playoff spot right now and sure the Pacific has been awful but the playoffs are the playoffs. The young duo of Domi and Duclair has been ultra-entertaining to watch this year and they have a lot of young players stepping up so far. While nobody expects them to do much damage in the playoffs, nobody expected them to even be sniffing the playoffs in the first place. 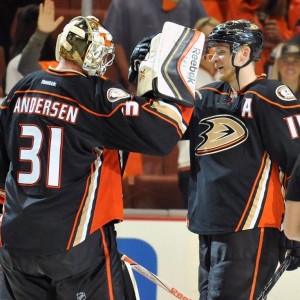 It has been a rough start for the Ducks but the players who weren’t doing well at the beginning of the season are starting to pick it up. They have some fantastic first-rounders in their lineup and Hampus Lindholm has been incredible for Anaheim. They probably could use a little more out of the players they have traded for, but newcomer David Perron has started quickly with his new club.

For the money some of those traded-for players make, their statistics are rough so far this season. It doesn’t help that Sutter has been hurt for a good portion of the season but they need more out of that group. So far the trend in the Pacific division has been team draft picks making up for a majority of points and goals. Vancouver didn’t break that mold as their draft picks have performed well this season. 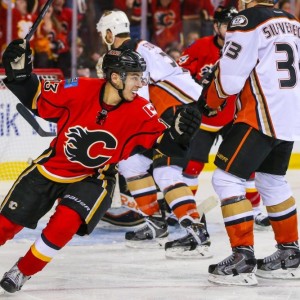 If the Flames didn’t have Gaudreau and Monahan on entry-level deals they would be in an even worse position than they are now. Luckily they have some iffy contracts coming off the books to make room for those two getting nice raises. Overall the draft picks have been the top producers while being the lowest-earners.

All those first round picks are starting to pay off, at least when it comes to goal scoring. The Oilers still find themselves in the lottery discussion but it has been a better year for them. They have gotten some rotten luck with injuries to key guys like McDavid, Nugent-Hopkins and Yakupov. I think they will have a strong second half with those draft picks leading the way.