When you start drawing comparisons to the great Evgeni Malkin, you know you got game. Russian prospect Klim Kostin definitely has game.

Kostin’s season got off to a hot start at the Hlinka Memorial when he scored four goals and seven points in his five games. His top-end skill was clearly on display. There were many stretches when he was the best player on the ice. Whether he was a possession monster holding the puck for 30 seconds at a time or he was unleashing his wicked shot, Kostin usually found a way to impact a game. 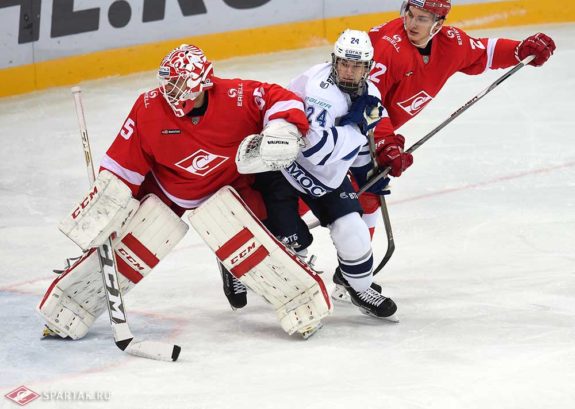 Klim Kostin could have been a top-3 pick if not for his injury. (Photo: HC Spartak Moscow)

Then the injury bug decided to appear at an unfortunate time. Kostin suffered a season-ending shoulder injury. That came after making his Moscow début. In eight games with Moscow, he didn’t record any points. That was after he wasn’t even invited to Russia’s World Juniors camp. Talk about having the highest of highs and the lowest of lows in one season.

So now the multi-million dollar question is what happens to Kostin on draft day? Questions about his shoulder injury and immediate plans will have some teams worried about using a first-round draft pick. Kostin is a classic case of a superior talent falling in the draft and someone will eventually take the chance.

Kostin has first-round talent, but opinions of him vary because of the injury risk and the chances he will sign. Most in the industry have him as a first rounder. He checks in at 13th overall on my list. That factors in the risks of taking him. I’d have him third overall on my list behind Nolan Patrick and Nico Hischier if it wasn’t for those risks. Someone will take a chance on Kostin. His skill and upside is too great to let slip too far.

“Kostin is a big strong powerful offensive winger with a high skill set and excellent skating ability. The Russian factor should play heavily in his draft status as the CHL first overall pick in 2016 refused to report to the Kootenay Ice which should raise some red flags. Kostin has also been plagued by inconsistency, at times showing flashes of dominant upside drawing comparisons to the likes of Evgeni Malkin, and also going through uninspiring stretches where he is difficult to find in the game and has little to no impact. Kostin did come to North America to play for Russia in the Super Series but was not as dominant a factor as projected posting two points in five games, as a result he was left of the Russian World Junior team and not even invited to the pretournament selection roster. In 18 combined regular season games in three Russian leagues including the KHL, he managed just one goal and one assist before season ending injury. All in all he entered the season as a potential top ten prospect for the 2017 draft and had a very disappointing season. Still considered a first round pick but has some serious red flags on his file and comes with boom or bust buyer beware conditions.” -Peter Harling

“A big-bodied power winger with strong work ethic…he can dominate for stretches with his cycle game and puck-protection skills…can carry defenders around the ice with his power and balance, or stickhandle around them with a deke or two as he goes to the net…high-energy guy, always keeps his feet moving…possesses a very quick release and has great shot selection…heads-up player who has a great work ethic and leads by example…works his tail off away from the play to get himself in position to make a play…strong intelligence and sees plays developing around him, knowing how to interject himself to provide the best opportunity…is responsible away from the puck and knows where to be to support his defenders…will be a real beast as he adds even more muscle to his impressive frame. ” -Future Considerations

Assuming he eventually comes over, Kostin’s upside is that of a dynamic, top-line scoring winger who can take over games by himself. They are few in his age range that can match the overall skill he brings. The question is can he overcome the injury?

Klim Kostin won a silver medal at the U-17 WHC in 2015-16. He was also selected first overall in the 2016 CHL Import Draft by the Kootenay Ice, but did not report.