The case can be made that the Tampa Bay Lightning have one of the best goalie tandems in the NHL. Their duo of Ben Bishop and Andrei Vasilevskiy is the envy of most of the league. Imagine being able to roll out a two-time Vezina Trophy finalist in Bishop. If Bish is tired or needs a rest, you can call on the kid who was the only netminder in last season’s playoffs to battle the reigning NHL-champion Pittsburgh Penguins to a full seven games.

Lightning coach, Jon Cooper certainly relishes the level of talent of his two goalies. Having a young and talented apprentice like Vasilevskiy playing behind you must help Bishop and the team more than hurt them. If Bishop were to suffer an injury, it is comforting to know that Vasilevskiy is between the pipes.

The Future is Here

During the offseason, the Lightning locked up the 22-year-old Vasilevskiy for the next three seasons with a very cap friendly deal for the franchise of only $3.5 million per year. The deal was seen by many as the decision by GM Steve Yzerman as to which goalie is the Lightning goalie for the future.

As the expansion Las Vegas Golden Knights prepare to join the league, the looming expansion draft almost assuredly points to the Lightning losing a goalie. Conventional wisdom continues to dictate that it will be Bishop that will be left unprotected by Tampa, if he is still with the team after the season is over.

As the league hits the quarter mark of the season, a closer look is required at the goalie situation in Tampa. Bishop, who has been the number-one goalie for the previous three seasons, came into this season knowing his time with the Lightning could very well be coming to an end.

Bishop knows the business end of the NHL as well as any veteran of trade deadline deals. It was a trade at the deadline in 2013 that brought Bishop to Tampa in the first place. He knows that his understudy is eight years younger and that fact alone leads to the logic that if the team can only protect one goalie, it should be the younger of the two.

Tale of the Tape

As the team completed its 23rd game of the 82-game NHL season, the Lightning hold the third playoff spot in the Atlantic division and are sixth overall in the Eastern Conference with a record of 13-9-1. Looking at the production of the two goalies, the numbers begin to reveal some stark realities that must be faced by the team, the coaching staff and ultimately, team management.

Playing in 15 of the team’s 23 games, Bishop has a record of 7-8-1 while Vasilevskiy has a record of 6-1-1 in his eight games. As the season was about to begin, Cooper said that his goal was a 60-40 split for the two goalies. So far, it is 65-35, but the case must be made that Vasilevskiy should be getting more ice time.

This isn’t an opinion simply dictated by the win-loss record because Vasilevskiy dominates that area. Look at the other telling stats such as save percentage: Bishop has struggled most of the season thus far but is now sporting a .902 save percentage. Not bad, but Bishop has averaged over .920 for the last three seasons. So, it is safe to say that so far this season, Bish is having a very un-Bishop like season.

To put more pressure on Bishop, Vasilevskiy is saving 95.1% of the shots he has faced this year. Not only is that tops on the team, but as of this writing, “Vasy” is leading all NHL goalies in save percentage.

Not convinced that Vasilevskiy should get some strong consideration for a hell of a lot more ice time? Then look at goals-against average. Bishop is currently at 3.04 goals against per game while Vasilevskiy is leading the NHL at 1.50 goals against. 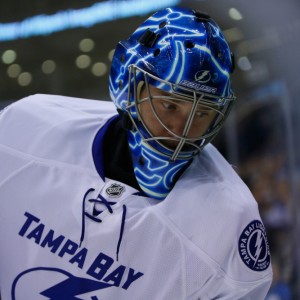 At the very least, Cooper should find ways to get Vasilevskiy more playing time. Before you blink, the season will be half over and the jockeying for playoff position will get harder and harder. If you think that this is too harsh for Bishop, you may be right. Seems that the only thing Bishop did to make himself the odd man out in the net for the Lightning was to be born eight years before Vasilevskiy.

It is too soon, much too soon to answer that question definitively. But in order to get the answer correct, the team must play Vasilevskiy a lot more than they are playing him now. Aside from knowing how the kid can handle more ice time, he is far outplaying the number-one guy. After stepping in during Game 1 of the Eastern Conference Final last spring, Vasilevskiy has answered the bell.

He certainly has played just about his best as he leads all NHL goalies in most statistical categories except games played. Isn’t this why you drafted this kid in the first round? He’s a darn good player and he’s playing darn well right now.

As the team plays without its captain for another three and a half months, by no means is a playoff spot a lock for this or any other team. The parity in the NHL sees to that challenge. The job of the GM is to provide a roster full of players for his coaching staff that can win.

The job of the coaching staff is to devise lines and strategies and players to put their team in a position to win every single night. Cooper has to play Vasy more often. I know Bishop is the number-one goalie but he is not playing up to snuff.

Maybe it is the wear and tear of having played over 126 regular season games over the last three years that is affecting Bishop this year. One fact that Bishop cannot deny is that over those same three years, Bishop has been injured in the playoffs in each season.

By no means am I intimating that Bishop must be demoted. But Vasilevksiy’s performance has to be rewarded. It has to be acknowledged by the team. For whatever the reasons are, Vasy gives the team a better chance to win right now than Bishop. Who knows, maybe if Bishop feels he may be losing his grip on the top spot, he may begin to raise his production. This only increases the chances for the Lightning to win.

And that has to be Cooper’s number-one objective for his team.