Five years from the time a player is drafted is generally enough time to know if a prospect will make it to the NHL or not. Those prospects likely haven’t hit their full potential at all, but it should be clear whether the NHL is still a realistic dream or not.

The 2011 NHL Draft was a tumultuous time for the Philadelphia Flyers. A day before the draft GM Paul Holmgren sent franchise stars Mike Richards and Jeff Carter out the door. In return, Philly received Jake Voracek, Brayden Schenn, Wayne Simmonds, the eighth overall pick and the 68th pick in that year’s draft.

While Flyers fans were confused about the direction of the team, they were still excited at the highest Philadelphia draft pick since the team chose James Van Riemsdyk second overall in 2007.

An early-season favorite for the first overall, Couturier dropped to eighth and straight into the Flyers’ hands. Other centers like Ryan Strome and Mika Zibanejad were taken before Couturier due to his bout with mono that caused him to miss a stretch of games during his final junior season.

Even at the time, Couturier was considered one of the steals of the draft:

The then-18-year-old surprisingly made the Flyers’ roster out of training camp and immediately started making a name for himself as a shutdown center. His most memorable moments of his career came in his first NHL playoff series where he canceled out Evgeni Malkin and the Penguins and scored a hat trick in Game 2 of the series.

Couturier seemed to plateau offensively after that series as the Flyers went through some retooling/rebuilding seasons. However, his defensive game only improved as he matured.

This season was arguably Couturier’s best, even if he only amounted 39 points in 63 games. He showed his offensive side more and was a reliable option behind Claude Giroux. His presence was greatly missed in the Washington Capitals series.

There’s no doubt that the Flyers are happy five years later with their selection of Couturier, but some fans have criticized the center for not taking a bigger leap in his development. But it’s important to remember that Couturier is still only 23. He made the Team North America roster among youngsters such as Connor McDavid and Jack Eichel. His development is not finished yet.

After two years in the OHL and three and a half in the AHL, Cousins proved he is a regular NHL contributor this season, participating in 36 regular season games, every playoff game and racking up 10 points.

When Cousins was drafted, he projected to be an agitating forward with bottom six potential. So far he’s shown that and in no way is that a bad thing.

For the longest time, the Flyers seemed to only draft well in the first round. They couldn’t compliment their roster beyond the first or second line. Cousins seems to be bucking this trend.

Despite not being big, Cousins lined up for the most part at center this year on the third line and even pushed out 2012 first-rounder Scott Laughton. He helped solve a hole in Philly’s lineup where others failed this season.

Despite that, Cousins may not have a future at center. Typically teams like a big-bodied center for the third line. But Cousins still fits in as a versatile winger on the third line that can pot in some goals.

Suellentrop begins a descent for the Flyers in the 2011 Draft. A defenseman from the Oshawa Generals, the Florida native was more of a defensive defenseman during his time in the OHL. 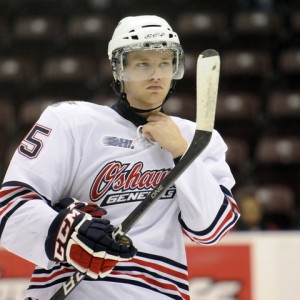 Colin Suellentrop during his time with the Oshawa Generals (Aaron Bell/OHL Images).

Unfortunately for him and the Flyers, stay-at-home defensemen are harder to project than other positions and Philadelphia did not sign Suellentrop to an ELC before losing his rights.

Since Suellentrop has finished his career with the Generals, he’s played collegiate hockey for the Univeristy of New Brunswick.

Two picks after Suellentrop, the Flyers selected the German Noebels from the Portland Winterhawks of the WHL. The team signed Noebels to an ELC and during a dark time for prospects in the system was considered one of its better prospects.

In his first professional season, Noebels scored 30 points in 31 games for the Trenton Titans in the ECHL and 23 in 43 for the Adirondack Phantoms. The next season, in 2013-14, the 6-foot-2 winger struggled with the Phantoms and when the team assigned him back to the ECHL, Noebels didn’t report.

Instead, he returned to Germany to join the Berlin Polar Bears in the DEL where he’s been ever since. While Noebels didn’t make it in North America, he’s had a respectable career overseas and even represented Germany at this year’s World Championships.

With their fifth pick of the draft, the Flyers saw size potential in Placek and nabbed him from the Hotchkiss School in Connecticut. The Czech Republic native committed to Harvard later that summer.

Placek, who is 6-foot-4, played 45 games in his first two seasons with the Crimson, but injuries allowed him to play only one game in his junior year during the 2013-14 season. Placek has not played organized hockey since.

He was left off Harvard’s roster the following year and EliteProspects and HockeyDB show no other data for the former right winger.

With their final pick of the draft, the Flyers took one of their favorite types of players: a big fighter. Standing at 6-foot-3 and 227 pounds, Philadelphia saw a potential enforcer for the future.

Mathers racked up 171 penalty minutes and five points in 55 games during his draft year for the Peterborough Petes of the OHL. The Ontario native played two more seasons for the Petes hitting a career high of 29 points his final season.

The Flyers signed Mathers to an ELC in 2012 and has been a part of the Phantoms and the ECHL’s Reading Royals for four full seasons. He never amassed more than four points in the AHL but did follow up on his fighter potential with 147 penalty minutes in 40 games.

While the Flyers can look at their first two picks of the draft and smile, the team probably would have liked to find some more NHL roster players in the bottom rounds. What’s even worse is that the final four picks have not had that much of an effect in the AHL.

However, the 2011 Draft found a longtime center for the team and a bottom six forward. For that, this draft won’t be marked up as a failure.