Just a few short days ago the Rangers were trailing the Washington Capitals 3 games to 1. The tables have turned and it’s an elimination game on each side of the ice. The teams are each competing in a Game 7 for the third time in four years and for the fourth time overall. No team in the history of the Stanley Cup playoffs has ever come back from 3-1 deficits to win best-of-sevens in back-to-back seasons. In a year of many record breakers for the Rangers, this seems like a nice notch for their belts.

Washington Captain Alex Ovechkin knows how to get under the skin of every Rangers fan and player, especially when it comes to guaranteeing crucial game victories. Something very close to the hearts of New York fans when it came from the mouth of Rangers legend Mark Messier.

“Nobody said it was going to easy. It’s going to be a Game 7. So we have to regroup and win there,” Ovechkin said after their Game 6 loss on Sunday, never actually guaranteeing anything, but whatever.

Strong words from Ovi as he has won 3 of his previous 8 game 7s he has been a part of. Ovechkin also has two goals in eight game 7s.

When Rangers head coach Alain Vigneault, was asked about Ovechkins comments, Vigneault responded with “To tell you the truth, I hadn’t heard about the comment, but at the end of the day, I would expect both players from both teams to want to come in and win,” Well played, AV.

Bold words from a team whose managed to give up a 3-1 lead.

Maybe Ovechkin should have started small and promised some game 7 offense.

The New York Post has a request for Alex Ovechkin. http://t.co/SPt0bwxPL3 pic.twitter.com/6Gyr5qFYiU

The Rangers have quite their share of success in elimination games and game 7s. They are 12-3 when facing elimination since the 2011-12 season, including 5-0 in Game 7s.

Lundqvist performance in game 7s is stellar. He has won an NHL record 5 straight game 7’s. He joins elite company with the likes of, Patrick Roy (6), Martin Brodeur (6), and Balfour (5).

From Defense To Offense

The Rangers have a strong defensive backbone. Their blueliners have stepped up and done an excellent job picking up the slack. Having the defense jump in on the offensive attack can be beneficial and has shown signs of doing so with McDonaghs overtime winner and Boyles late game 6 goal.

The Rangers have some of the best defensemen in the league from the likes of McDonagh, Girardi, Yandle and Staal. If their defense can step up and find the back of the net along with their offensive line mates, it could desperately help the Rangers’ in the scoring department.

Take McDonagh for example. There is nothing more rewarding than when your Captain comes up with a huge overtime game winner in a do or die elimination game. McDonaghs wrister hit defenseman Tim Gleason and went past Holtby. “We had to regroup, our season was on the line,” McDonagh said. “I was joining the play, and I knew I had a lot of time. Step pump-faked and was able to drop it.”

Finding The Back Of The Net

From what is seems, the Rangers seem to be stepping away from their failed attempts of over-passing and theatrical tape to tape plays that have cost them quick shots that could turn into goals during important games.

Instead, they took the Caps by surprise by one-timing shots. Kreider and McDonagh’s shots deflected off Washington defensemen Brooks Orpik and Tim Gleason’s skates, beat Holtby, and gave New York a win they desperately needed.

Good things will happen when you send bodies, and pucks, to the net. 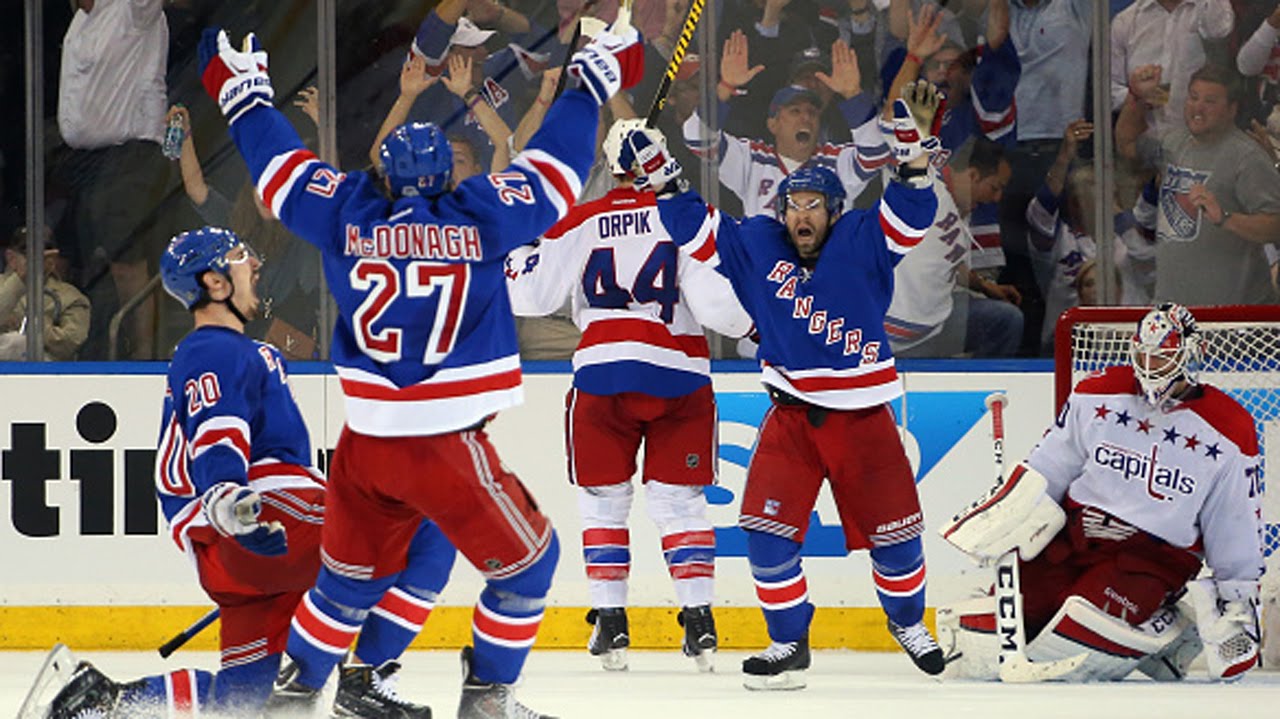 The pressure is on for both teams. The Capitals are looking not to blow a 3-1 series lead and the Rangers are looking not to end their Presidents’ Trophy-winning regular season as they attempt to come back from 3-1 down for a second season in a row.