Any fan of the NHL knows that to build a good team, you must draft well and manage your assets. Hitting on first round picks is extremely necessary, but it’s even more important to unearth some draft day gems in the later rounds.

Take the Detroit Red Wings for instance. The Wings managed to grab Henrik Zetterberg 210th overall in the seventh round of the 1999 NHL Entry Draft. He’s been an elite player for years and is the Wings captain. Sticking with Detroit, former superstar Pavel Datsyuk was drafted 171st overall back in 1998.

A more recent example is the Tampa Bay Lightning and Ondrej Palat, who was the fourth last player taken in the 2011 selection. He’s blossomed into an offensive threat and a key cog on the Lightning team.

The Toronto Maple Leafs drafting in recent years has been excellent. Under the watchful eye of Mark Hunter, the team and its scouting staff are making intelligent picks for players that could have a huge future wearing the Blue and White.

Adam Brooks is having himself a fantastic season for the Regina Pats of the WHL. He was taken by the Maple Leafs in the fourth round, 92nd overall in the 2016 draft. At the time, Brooks was coming off of a campaign that saw him score 38 goals and 120 regular season points to go along with 23 points in 12 playoff games.

It would be difficult for any player to reach those numbers for a second time, but nobody told Brooks that. He recently surpassed his career high and has 40 goals and 123 points.

Hit em with the 40 like Adam Brooks. He scores his 40th of the season and adds 2 assists in the Pats win pic.twitter.com/swCV7rlJfx

The scary part? Brooks still has eight games to go until the Pats regular season is concluded. Brooks is currently the second leading scorer in the WHL behind his teammate and Anaheim draft pick Sam Steel.

Brooks performed extremely well at the Leafs rookie camp and was one of the final cuts last season made by the Toronto Marlies. He will be too old for the WHL next season, and will either be playing with the Leafs, Marlies or find himself sent down to the Orlando Solar Bears of the ECHL.

He’s a talented forward who would definitely benefit from some time in the AHL. No prospect is a sure thing, but Brooks is looking like a fantastic pick that could be a big part of the next crop of Leafs rookies.

Early on this season you couldn’t watch or read hockey news without seeing the name Jeremy Bracco pop up. The former Kitchener Rangers forward was on fire and in the midst of a prolific scoring streak.

He was then dealt to the Windsor Spitfires, the 2017 Memorial Cup host, to help bolster their team for the tournament. Bracco compiled 17 goals and 51 points before the trade to the Spitfires. Since that time he has added another 30, which puts him at 81 total for the season.

Jeremy Bracco with a beautiful play as he hangs on to the puck and finds Connor Corcoran for the goal pic.twitter.com/DSW3E7kNjW

Bracco is an extremely skilled forward who already has international winning experience on his resume. He was part of the American World Junior team that defeated Canada to win the gold medal on Canadian soil. He uses his vision and skating to set up multiple scoring chances for himself and his teammates.

Look for Bracco to be front and center in the Memorial Cup. All eyes will be on the Leafs prospect and the expectation is for him to shine and lead his team to victory in their home building.

Nikita Korostelev is one Leafs draft pick that simply gets overshadowed by some of the other names on this list. Drafted back in 2015, the Moscow native was a power forward and member of the Sarnia Sting.

This season he was traded to the Peterborough Petes, who are currently first place in the OHL’s Eastern Conference with a record of 41-20-2. The former seventh-round pick has 11 goals and 28 points for the Petes and stands at 28 goals total to go along with 63 points over the course of the full season. 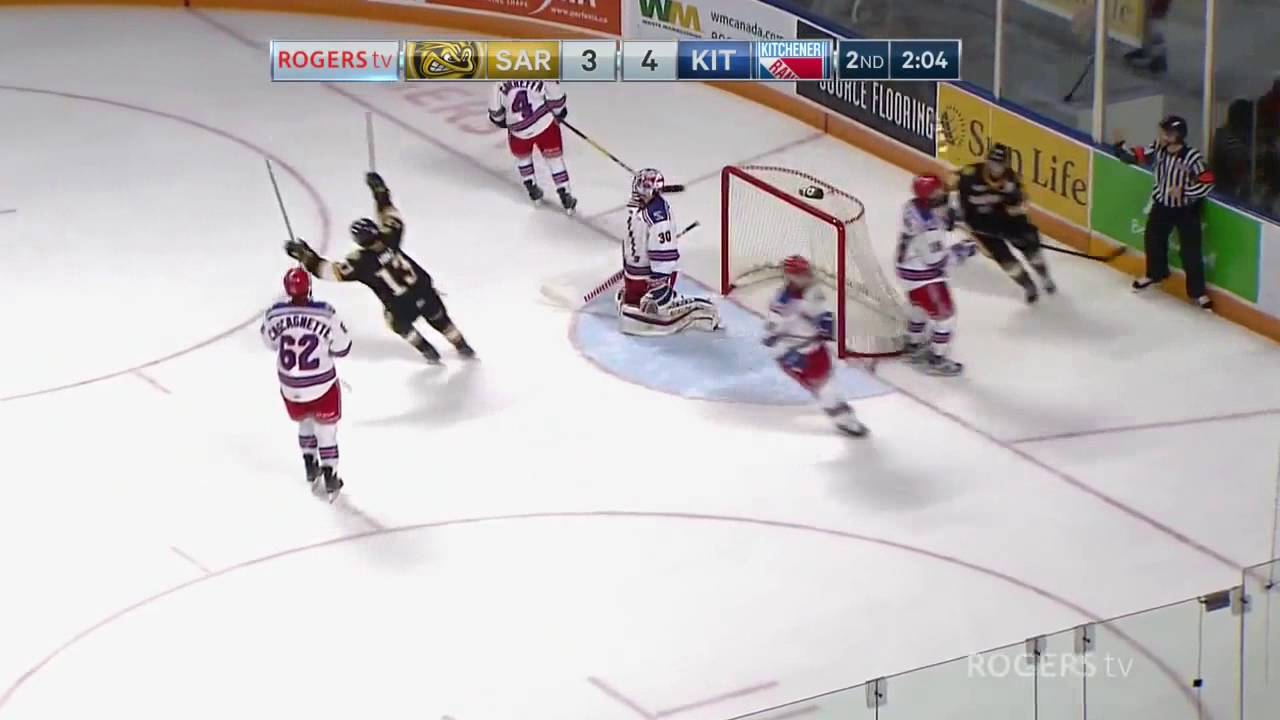 The skilled Russian forward was one of the biggest pieces on the trade market and the Petes hope that he can lead the team to victory in the OHL playoffs. Korostelev also possesses an excellent set of hands which he continues to use to score some highlight reel goals, both in regulation and the shootout.

He’s a darkhorse prospect that’s rapidly rising through the Leaf system. If he goes on an impressive postseason run, it should only help his standing with the Maple Leafs for next year.