Marian Hossa was fantastic again in game two against the Minnesota Wild. The Wild had no answers for his dominant play in both the defensive and offensive ends of the ice.  Hossa and his Chicago Blackhawks teammates Chelsea Daggered the Minnesota Wild 4-1 to take a two games to none lead in their playoff series against Minnesota.

Hossa was involved in every play and the Wild as in game one had no answers for him.

After game one, I mentioned in my post game article that the Wild had to stop Hossa. Hossa embodies what the Blackhawks are all about. They opportunistic and they have speed. Their counterattack can destroy a team and that’s what happened today in Chicago.

Can Marian Hossa be Stopped?

Can Marian Hossa be stopped? I don’t think so. Hossa assisted on three of Chicago’s four goals. He assisted on the first, third and fourth goals. What makes Hossa dangerous is that even when he doesn’t score, he’s in the offensive zone causing havoc and winning battles for the puck.

In the defensive zone, Marian Hossa is also involved. He steals the puck and makes critical plays to bail out his team and then this opportunistic and has a knack of finding teammates streaking up the ice.

The Wild turned things around in the second and started to dominate the play but as usual they found themselves behind the eight ball heading into the second period down 2-0.

The Wild had their Chances but Only Scored One Goal

The Wild had their chances in both the second and third periods as they played an aggressive style of hockey but as usual, the team’s inability to score goals hurt them. Chicago doesn’t have that problem. They find a way to make their chances count.

The Wild need to play desperate hockey like they did in the first round of the playoffs. They will have a chance to do that in St. Paul as the series now shifts to the Xcel Energy Center. 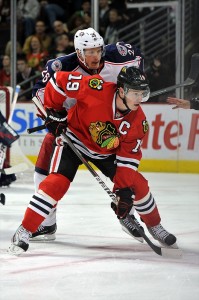 If he wasn’t trying to play pretty and fancy hockey by passing the puck instead of shooting, he was playing pathetic hockey in the defensive zone. On Jonathan Toews goal in the first period, Koivu allowed Toews to jump into the play and net the loose puck. After Hossa’s was on the breakaway and Ilya Bryzgalov made a great save on his shot, Toews rushed into the play. The rebound fell to the side of the net and Toews buried it into the back of the net.

Koivu had a step on the play but he stopped skating. Toews didn’t and that put the Wild down early. The Wild can’t play that way against Toews and company. They just can’t. This game was terribly disappointing for me.

I want to see more intensity out of Koivu. He is the captain and he needs to lead by example. He needs to play better and not make critical mistakes.

I’m not ready to write off the Wild just yet. They are coming back home but it’s looking more and more like the Wild will bow out in five or six games. Yes, that’s my prediction. The Wild will win a game or two but will not win the series. I guess I am writing them off, so if they turn this thing around, you will see the biggest homer of all will be ecstatic.

Anthony Bloch (AKA Sportmentary) – is the Founder and Editor in Chief of Sportmentary Online Sports Talk.

In addition to running his blog, Anthony writes a weekly column for Last Word on Sports and writes about the Minnesota Wild for The Hockey Writers.