When the Philadelphia Flyers signed unrestricted free agent Michal Neuvirth this past summer they acquired a 27-year-old who was quickly becoming a journeyman goaltender. It was his fourth team in three seasons and while the Czech netminder had shown flashes of starter material in the past, he was viewed more as a top-end backup.

Neuvirth’s first action for the Flyers came in relief for incumbent starter Steve Mason after he let up four goals in the first seven minutes against the Florida Panthers in Philly’s third game of the season. Neuvirth couldn’t fix things as he let up three goals and the Flyers fell 7-1.

It was the next two games where the former Washington Capital made his biggest mark. He stopped a combined 61 shots against the Panthers and Chicago Blackhawks to earn two shutout wins and skyrocket atop the goaltender statistical leaders.

The Flyers were able to right the ship a bit from there earning two more wins in the next three games before hitting a rocky stretch to begin November. And just like at the beginning of the season, the Flyers have turned to Neuvirth to lead them to better fortune in March.

Despite more than just that one tough stretch at the beginning of November, the Flyers are still in the hunt for the postseason, sitting three points behind the Pittsburgh Penguins for the last Wild Card spot in the East following a 6-2-2 record in their last 10. Neuvirth has five of those wins.

Philly has been riding Neuvirth’s play since Mason went down with an injury and left the game against the Toronto Maple Leafs on Feb. 20. Since then, the Flyers haven’t looked back, only losing one game.

Neuvirth has a save percentage of just below .900 in that span after a rough game against the Carolina Hurricanes where he let up three goals on 18 shots. His biggest gaffe of the game – and maybe the season – came when he made an errant pass to Joakim Nordstrom out of his net which set up an open-net goal for a 1-1 tie.

The ‘Canes gained a three-point lead in the standings that night and the playoffs looked like a foggy dream for Philly, but coach Dave Hakstol kept Neuvirth playing and the team started its current three-game win streak the following contest in front of Neuvirth.

Neuvirth has 89 saves during the streak, but none bigger than this game-saving stop on the Minnesota Wild’s Charlie Coyle with just under three seconds left to play in a 3-2 game:

What about Steve Mason?

Lost in the play of Neuvirth is Mason, who has been the team’s starter for three seasons now, and who most Flyers fans consider to be underrated around the NHL. Yet, he hasn’t played in four games, despite a bad game from Neuvirth against the Hurricanes.

He did leave the Toronto game early and could still be dealing with some minor difficulties from an injury, but the Flyers haven’t said anything about it. Either way, Mason isn’t likely to play in Philly’s next 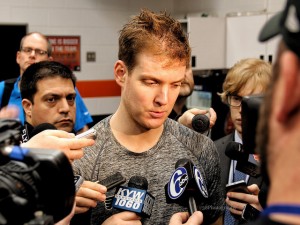 game against the Edmonton Oilers on Thursday, not with the way Neuvirth is playing.

Neuvirth’s biggest knock in the past has been his inability to roll with a starting role. The Flyers could be testing him now to see if he can handle it, where he couldn’t before, for next season and beyond, but that’s just speculation.

Either way, Neuvirth has a strong grip on the Flyers’ net for the time being with 20 games left for Philly to hunt down a playoff spot in the Eastern Conference.

Wes Herrmann graduated from Penn State with a bachelor’s degree in journalism in 2014. He used to write hockey for Cardiac Cane and Broad Street Buzz and has loved the game since birth. Follow him on Twitter at @Wes_Herrm or contact him at wherrmann421@gmail.com