Rob Scuderi has just eight goals in 722 career regular season games. According to even strength shot data at Puckalytics.com dating back to 2007, Scuderi has scored on less than 2% of his attempted shots.

Consider that over the same time frame, Sidney Crosby has 143 even strength goals and a shooting percentage of 14%. His current linemate Phil Kessel has 152 goals (10%). His other linemate Chris Kunitz has 111 goals (12%).

If you were the Dallas Stars and trying to defend against a 4-on-3 rush including Scuderi, Crosby, Kessel, and Kunitz on Thursday night, who would you leave open?

Heck, I might even leave Scuderi wide open intentionally (and maybe that explains why Scuderi has more even strength shot attempts than Crosby through two games this season).

I get it. Pittsburgh Penguins head coach Mike Johnston wants his defense to be active on the offensive rush, joining the attack and providing an extra option to the forwards.

Many coaches in today’s NHL embrace the same philosophy.

And the strategy makes sense when the activating defenseman is someone with offensive talent like Kris Letang. But how can you conclude that the best option on an offensive rush is a long slap shot from a player who can’t even score in 1-in-50 attempts?

Maybe we can write off that video example as Phil Kessel being the new guy and not knowing any better.

But this isn’t a one-off example. This has been happening for a long time. Crosby does it. Kunitz does it. Evgeni Malkin does it.

I often get asked if [insert coach name here] is a good NHL coach. Usually, I say ‘I don’t really know’.

Evaluating a head coach is tough to do when you’re not in the locker room between periods, on the ice at practice, or able to see how a coach interacts with his players behind closed doors.

All we can really use to evaluate are on-ice results and heavily-scripted press conferences.

Funneling the offense through Scuderi is one of many reasons that I’m still not sold on Mike Johnston’s effectiveness as a head coach in the National Hockey League.

If Johnston is telling his forwards to pull up and pass off to Scuderi, there’s a major issue in his coaching system.

But Johnston seems like a smart guy. I’ll give him the benefit of the doubt and assume that the issue is a result of player decision-making or execution. Being a smart guy behind the bench doesn’t win hockey games though.

Is Johnston willing to discipline Crosby, Kessel, or Malkin if they continue to make the same mistakes? Remember, Crosby earns more money in a month than Johnston earns in an entire season.

Crosby’s pass-first mentality has also been one of the biggest reasons the Penguins powerplay has struggled since last November. Johnston either isn’t having tough conversations with Crosby or he can’t convince Crosby to change. And that’s a problem.

The NHL figured out Mike Johnston and he hasn’t adapted well. Now they’ve had an entire summer to break down film on his simplified systems. That’s also a problem.

Dallas definitely did their homework before facing the Penguins on Thursday night.

Twice on neutral zone faceoffs they created scoring chances after noticing that the Penguins defense pinches hard on the strong side winger in the neutral zone.

Stars defenseman Jason Demers sees the overactive pinch by Cole and springs Verne Fiddler for an odd-man break against the Penguins. 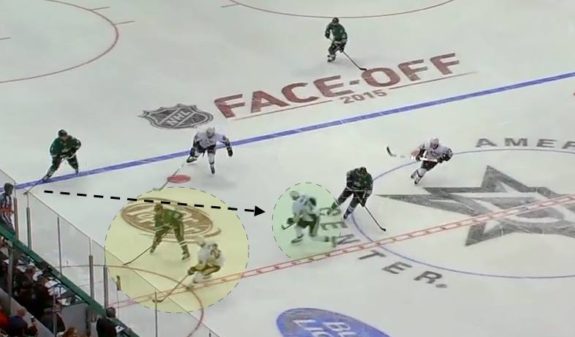 Evgeni Malkin (green circle) probably should have stayed with Fiddler, the opposing center, but that doesn’t explain why Cole was so anxious to attack a winger who posed little threat.

This is obviously the Penguins’ neutral zone system.

The Stars and head coach Lindy Ruff knew this. If you have any doubts, watch the Stars’ Alex Goligoski and Jamie Benn toy with Ben Lovejoy off another neutral zone faceoff ten minutes later:

Like a quarterback in football, Goligoski waited until he saw Lovejoy take one stride towards the curling Benn before firing a pass through the middle of the ice.

Should all the blame be placed on coach Johnston and his staff?

Probably not. Top four defensemen Lovejoy and Cole are in over their head against top NHL talent at the moment, but that’s the current roster Johnston has to work with. Lots of offensive depth, very little on the back end.

Johnston will need to outcoach his opponents if the Penguins are going to have success in the loaded Metropolitan division. After 89 games with Johnston behind the bench for the Penguins, that hasn’t happened.

It’s still early, but the heat is on.

~ How about some positives from the Penguins winless opening weekend? Phil Kessel was without a doubt the best player on the ice in the first two games for Pittsburgh. He created his own offense with relentless pressure that led to a handful of turnovers in both games. The Crosby-Kessel-Kunitz line also had a number of long shifts in the offensive zone. As crazy as it sounds, the best thing Crosby can do to help Kessel push for 50 goals this season is to shoot the puck himself. Like James Neal, Kessel just needs a second to get off his wrist shot. Crosby needs to command the respect and attention of the defense to create that space for his linemate.

~ Overall, a great pair of starts for Marc-Andre Fleury as well. He wasn’t flawless, but his teammates hung him out to dry several times. It’s been fascinating to watch Fleury’s style evolve since Mike Bales took over as goaltending coach a few years ago. Fleury looks more and more like Jonathan Quick each season.

~ Evgeni Malkin needs a shooter on his line, which means David Perron should get an extended look. Sergei Plotnikov and Patric Hornqvist are just too similar. Both crash the net hard and wait for Malkin to shoot so they can smack home rebounds. Malkin loves to work the give-and-go. He needs another linemate on the perimeter of the offensive zone to give him that option.