The month of March is almost over, and with it goes the last full month of the hockey season. Unless, of course, the Minnesota Wild make the playoffs. And as of right now, their chances are looking pretty good.

A Month to Remember

Zach Parise has been a big player this month for Minnesota, recording 11 points during March. (Perry Nelson-USA TODAY Sports)

The Wild just finished up a two-game home stand against the Calgary Flames and Los Angeles Kings, capping off a wildly (sorry, I love a good pun) successful month of March. Minnesota dominated Calgary 4-2, and closed the gap on the Chicago Blackhawks Friday night to one point. They then beat the Kings on the second night of that back-to-back, passing Chicago in the standings. While that game wasn’t as dominant for the Wild, it still demonstrated that this team is here to play.

This team has come from the bottom of the Western Conference and now has the third-most points in the conference with 95. I don’t know about you, but I am in disbelief with this team. It doesn’t get much more impressive than these guys.

While the month of March was huge for the Wild, these last two weeks are going to be a big test for these guys. Minnesota has one of the hardest schedules in the NHL for these last six games. The Wild face the New York Rangers, the Detroit Red Wings, the Nashville Predators and the St. Louis Blues, to name a few, over the next two weeks. That’s far from an easy end to the season.

If these boys want that spot in the playoffs, they’re going to have to work for it. The Wild have made an absolutely amazing run since the All-Star break, going 24-5-1, but the season is far from over.

The  race in the Western Division is crazy, and anything could happen before the season ends. Although it seems like the Wild are safe at this point, they really can’t go into these last few games with that mindset. This team has played so well since acquiring Devan Dubnyk that it would be a shame to stop now. Minnesota just needs to keep playing like they’re battling for the last spot in the playoffs. 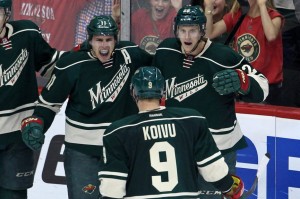 The Wild are extremely capable of not only making it to the playoffs, but making a solid run. In order to do so, though, they need to stay focused. Devan Dubnyk needs to stay healthy and strong. This team would also benefit greatly from improving their power play. Minnesota has the fourth-worst power play percentage in the NHL with 15.4%. While the Wild are perfectly capable of scoring goals, making the most of a man advantage throughout these next games wouldn’t hurt.

April is always an exciting month for hockey, especially when your team is in the running for a playoff spot. The Minnesota Wild have turned their season around and now have a 98.8% chance of making the playoffs. While nothing in sports is ever guaranteed, it’s certain these next two weeks are bound to be exhilarating.