Over the 100 plus years of the Montreal Canadiens’ existence, they have built some legendarily rivalries with the best in the NHL, from the last-lasting feuds with the Maples Leafs and the Bruins, to the heated battles with the now-relocated Quebec Nordiques.  While last season’s playoffs saw a resurgence of the Habs’ rivalry with the Ottawa Senators, the Sens are set to miss another run at the Stanley Cup, losing the edge to another hard-fought series. 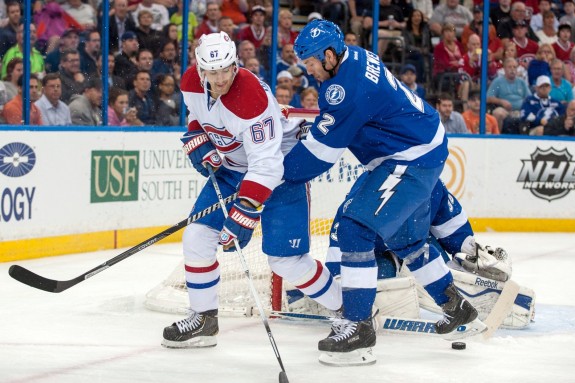 Instead, there is now a new rivalry in town and, if the way games played out this season are any indication, this one promises to be a doozy.

Birth of a New Rivalry

One team is a storied Original Six hailing from the city that brought the world the game of hockey.  The other is a product of the 1990s expansion into the U.S. sunbelt region.  Perhaps they are an unlikely rivalry for the Canadiens, but throughout the 2013-2014 season the Tampa Bay Lightning have developed into just that.

Like many warm-weathered NHL cities, Tampa is overrun by Quebecers escaping the winter cold to cheer on their favorite team.

Usually those fans north of the border – whether they flock to the Tampa Bay Times Forum or the Centre Bell – have a lot to cheer for: the Canadiens went 3-0-0 against the Bolts in the 2012-2013 season and hold a respectable 10-8-2 record in the five season prior to that.

But that all changed with the start of the new season.  For one thing, the two teams shared a division for the first time, the Atlantic, increasing the games they played against one another.  The Canadiens, in a never-ending quest to add size to their small roster , also signed tough guy George Parros in the off-season.

This, of course, was huge for the rivalry-in-the-making, as Parros (then with the Florida Panthers) handily won a huge fight against Lightning defenseman Radko Gudas during the second period of the April 2, 2013.

The stage was set for a new rivalry in the NHL.

The first two games of the season featuring the new division opponents were tame affairs.  On the November 12 game in Montreal the two teams faced one another for a hard-fought game but with some of the least feisty penalties taken, including two delay of games and a too many men penalty from Montreal.  The same thing happened on the December 28 game, with the Canadiens outplaying their opponents for most of the 60 minutes but the penalty box was kept relatively empty.

Parros did not play in either game, after being hospitalized from a fall from a fight during the October 1 2013 home opener game and then due to a second concussion suffered after a fight on December 14.

However, the third game of the season really got the rivalry going.  On February 1, Parros and Gudas faced one another for the first time since their April 2, 2013 tilt.  But they were not the only two players mixing it up.

Only three minutes into the game, Bolt’s Jean-Philippe Cote delivered a strong, legal hip check that sent Canadien Brendan Gallagher banging against the glass.  It quickly prompted a fight between Cote and the Habs’ other enforcer Brandon Prust.  Both received fighting majors.

Halfway through the first period was another altercation.  The puck was played back along the boards towards the Canadiens’ bench, which Prust struggled to control.  While keeping his eyes on the puck at his feet, Gudas targeted the Hab, immediately skated to him and delivered a cross-check to his back.  This resulted in a shoving match between Gudas and Parros while Prust was down and brought the rest of the players on the ice into the fray.  Gudas and Parros both received unsportsmanlike conduct penalties.

All of that spilled over when, during a TV break, Brandon Prust mixed it up with goalie Ben Bishop.  When Bishop and Prust started to battle one another, skaters on both teams – including Habs goaltender Carey Price – got involved in the fight.

The game ended with 52 penalty minutes handed out.

Before the start of the April 1 game at Tampa Bay, the Canadiens and Lightning were only two points apart in the standings and both had chances to clinch a berth into the playoffs.  While their ticket to the dance was all but punched, the two teams were battling for the second and third seeds and the home ice advantage.

What the April 1 game lacked in all out brawls like the game two months prior, it made up for in sheer nastiness.  The game remained close for two periods of play with the teams tied at 1, but there were plenty of hard checks that finally boiled over when Nate Thompson’s boarded Canadiens player Andrei Markov.

In the dying minutes of what turned out to be a 3-1 win for the Bolts, Habs Douglas Murray elbow connected with Michael Kostka’s chin, toppling the defensemen to the ice in a dangerous hit, as Murray had plenty of time to line up a legal body check.

Seeing his teammate lying motionless on the ice for several seconds brought Lightning rookie phenom Tyler Johnson into a fight with the Canadiens’ Mike Weaver; both would sit in the sin bin for roughing.

Douglas Murray would get a match penalty for the head shot.  Although Kostka was able to skate off the ice under his own power, he was later sidelined with a concussion.

BREAKING: Mike Kostka has been diagnosed with a concussion. There’s no timetable on his return. #TBLightning

In a classy move, Murray later apologized to Kostka for the hit following the game. Additionally, the April 1 game ended with both teams earning this:

Because the Capitals and Devils both lost tonight, the Canadiens have officially clinched a playoff spot! pic.twitter.com/yxsoijddo2

It is all but certain that these two teams will meet in the first round of the playoffs.  After going 1-1-2 against them in the regular season, the Habs will need a strong series to defeat their new rivals.

When the NHL developed the new playoff format to build inner-division rivalries, they probably were not expecting such a vast difference between two foes.

Fortunately for us, this match-up promises to be a playoff series to remember.