In a preview of what should be the Western Conference Finals, the Nashville Predators and Winnipeg Jets came out swinging. It’s like if Goliath took on another version of Goliath, but with better goaltending. Nevertheless, the offensive slugfest resulted in a last-minute goal that put the Predators up six to five. Both Vezina worthy-goaltenders played great despite giving up a combined 11 goals, but the offenses were too strong. The defenses were lost in the scuffle but stood out in the offensive zone.

There were a few bright spots, and there were a couple forgettable moments for the Predators. With that said, let’s take a deeper look into the game and how the Preds played.

The New Kid in Town

The Predators welcomed their newest member on Tuesday, and Ryan Hartman did not disappoint. His style of crash and bang hockey is a nice shot in the arm, and his line looked more than a bit jacked up. Let’s look at the simple stats first, and for reference, HDC stands for high danger chances directly created. 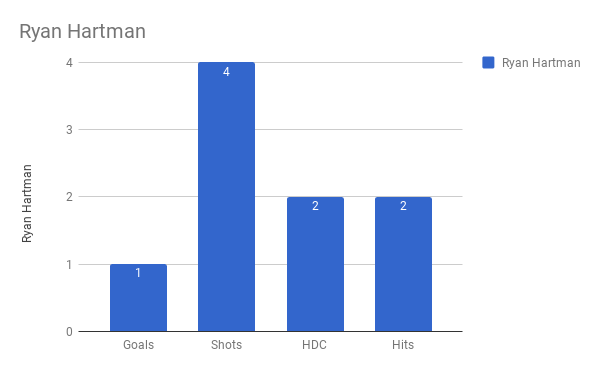 If you can get this kind of production from a fourth liner, then your team is doing just fine. I don’t think Hartman will be a fourth liner for long, but keeping him there adds a certain level of skill not possessed by the bottom six. His shots are great and hits are fine, but his high danger chance creation is elite. It can take top six players multiple games to create this many high danger chances, so it’s promising to see Hartman create two in his first game.

Let’s take a deeper look though and see how Hartman was a positive possession player and overall a good influence on the Predators. For reference, I’m using unblocked shot attempts (Fenwick), goals, high danger chances (HDC), and zone starts for (offensive zone) and against (defensive zone). All stats are at five on five. 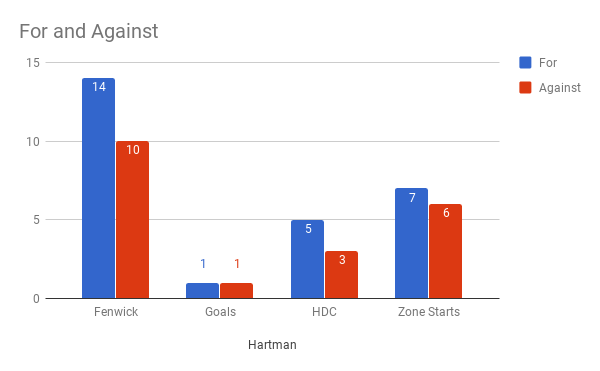 Winning 58.33% of the shot share is a great accomplishment for a fourth liner. He went up against the second and third defensive pairs, but did mostly face Patrik Laine and Nikolaj Ehlers. Keeping the goals even when playing against such talented scorers is a feat in its own right. But the most tantalizing part of the chart is the high danger chances.

The last little piece of context is that Hartman didn’t exactly receive shelter. While he started in the offensive zone 53% of the time tonight, it’s way down than his normal numbers in Chicago, which was about 60%. Hartman wasn’t the only Predator to stand out, as a certain defenseman shined brighter than usual.

The Captain Steps Up

Whether or not you have concerns about Roman Josi’s defensive play, and those concerns are certainly valid, you can’t deny his greatness against the Jets. The captain had five assists, with four coming at five on five and two being primary assists. Josi made full use of his 24 minutes on ice, and was a force of nature in the offensive zone. We’re going back to the advanced stats, and we’re using the same stats as we did with Hartman. 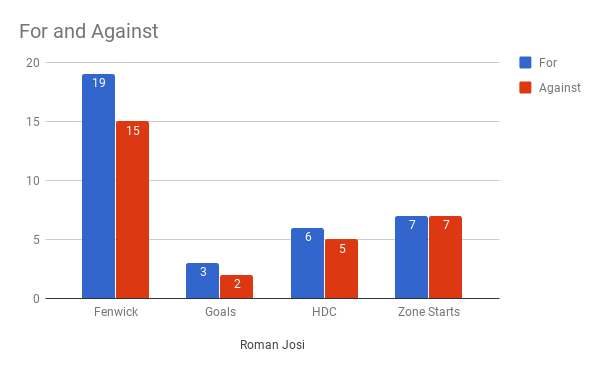 Even if Josi’s defense is borderline garbage, his offense still outweighs the bad. He gave up two goals, who cares! He scored three! He gave up five high danger chances, who cares! He was on the ice for six! The defense is starting to do what made it so successful during the playoffs, as they start to venture below the opposition’s goal line. Josi’s strength is how he floats through an offensive zone in a fluid-like manner. It creates an unpredictable movement that leaves defenses befuddled and often opens up the slot.

There was no zone sheltering today for Josi, although he didn’t exactly face the cream of the Jets. He spent equal time against the bottom nine and rarely saw the Scheifele line. Despite some competition sheltering, Josi was a dominant force in the offensive zone and showcased his elite talent.

When a team puts out their top line, they usually expect them to dominate and control the pace. The JoFA line literally did the opposite of that. They went up against the Scheifele line and looked like a Freshman squad taking on the Varsity team. It was only by the grace of Pekka Rinne that this line didn’t get scored on two or three times. Let’s take a look at the stats, and we’re using the same stats as the last two instances. 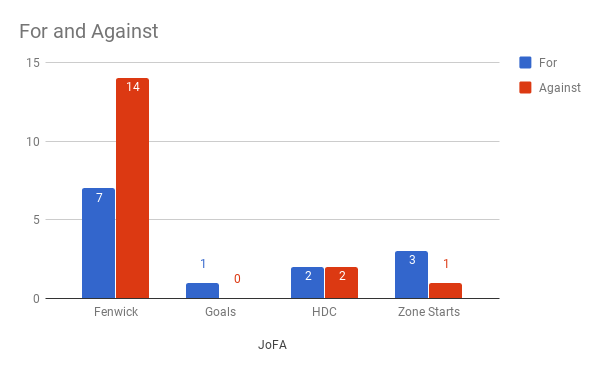 The only thing to be happy about here is that JoFA scored a clutch goal to tie up the game at five. They did produce two high danger chances but also gave up two, which isn’t good when they’re starting in the offensive zone 75% of the time. A playoff series won’t fall in the Predators favor if JoFA remains such a non-factor.

The Predators stroll into Rogers Place on Thursday as a devastated Edmonton Oilers team will look to play spoiler. While Edmonton isn’t a great team by any stretch of the imagination, through Connor McDavid all things are possible. Even without Patrick Maroon on his side, McDavid can still make an entire team look silly. This will be a fun game for sure.