On Friday, Dec. 29, 2017, Team Canada faced off against Team USA for the World Juniors’ first outdoor game, which was played at New Era Field in Orchard Park, N.Y. Although the Canadians started off strong in the first period, they couldn’t prevent another shootout from happening.

After a well-played game in minus-15-degree weather (in the wind chill) and constant snowfall, the game went to a 3-3 tie in the third period, which the Canadians ultimately lost, not scoring a single goal in four shootout attempts.

Losing to the Americans again in this manner may not seem that bad considering it’s only a preliminary game. But it is. It might even be worse because it’s a painful reminder of what happened last year. Canada’s talent lies in areas other than sniping, and the only thing a shootout is good for is sniping — no matter how amazing Team Canada’s goalie, Carter Hart, truly is.

USA’s Top Players in the NCAA

Reliving painful memories is certainly something nobody wants to do and that’s why Canada really needs to keep an eye on both Brady Tkachuk and Casey Mittelstadt. Tkachuk has been a constant threat to all the Americans’ opponents so far, having scored two goals, one assist and one shootout goal in his first three games. This was to be expected of the young forward, who’s projected to get selected within the first 10 spots in the upcoming draft this summer.

Mittelstadt has been an even bigger threat, though, having scored three goals and three assists in his first three games. He’s already been drafted into the NHL by the Buffalo Sabres at No. 8 during the 2017 NHL Entry Draft. Even though Mittelstadt’s been a sniping machine throughout this tournament so far, he’s not been much of one back with the University of Minnesota, having only scored five goals in 19 games.

Mittelstadt’s regular-team stats are surprising, as it would appear that he’s one of the most offensively gifted players in the entire tournament. The same could be said about Cale Makar of Team Canada, who currently has just as many points as Tkachuk. Although Makar was the No. 4 pick from the 2017 draft, he’s a defenceman and went into this tournament with the lowest point-production stats during the 2017-18 season of all Canada’s defencemen.

What makes these three players interesting, though, is that they all play in the NCAA. It would seem that guys who play in the NCAA may not have the highest point-producing stats during the regular season (in comparison to guys in any of the CHL umbrella leagues), but when they play in international tournaments such as this one, they manage to produce way more than expected.

Perhaps this is because teams in the NCAA are particularly good at developing their players, and it turns out, guys choosing to develop in the NCAA versus the CHL may be a trending route to the NHL.

Let’s look at Makar for a moment.

Makar on the NCAA

Makar has a particularly interesting story behind his route to the NHL. Even though he’s not played in the NHL yet, it’s only a matter of time. He was drafted at No. 4 by the Colorado Avalanche last June but it wasn’t until halfway through his draft-eligible year when he really got noticed as an elite player. He wasn’t ranked among any scouting organization’s top 31 prospects until December (2016) and didn’t rank among anyone’s top 10 lists until January (2017).

Back in 2013, Makar was drafted into the WHL by the Medicine Hat Tigers during the eighth round at No. 164 overall. That’s a pretty late round to get drafted at and to be honest, it’s incredibly rare for someone drafted that late in the CHL to ever make it to the NHL. So Makar decided against taking the WHL route and instead took the AJHL route and played for the Brooks Bandits, a team with significantly less exposure to NHL scouts.

This was Makar’s first major move in the right direction and against all the odds, he started getting noticed. During his draft-eligible season with the Bandits, he scored 24 goals and 51 assists in 54 games as a defenceman. He also served as team Captain for Canada West at the 2016 World Junior A Challenge and scored four goals and four assists in four games.

Now he’s playing for UMass-Amherst in the NCAA—a route that most Canadians are still not taking to the NHL. During Team Canada’s selection camp back a couple weeks ago, The Hockey Writers asked Makar why he decided to play in the NCAA when he could have played in the CHL.

“I think back in January when I was playing for the Brooks Bandits, it was kind of a deciding factor for me in terms of development to go the NCAA route,” Makar said.

“I felt that you have more time off the ice and you get to work out a little bit more. I was a smaller guy at the time so building my size was going to help me get to the next level so I felt that was a big factor.”

Makar also believes that choosing to play in the NCAA may be a trending option for guys living in the western parts of Canada.

“It’s becoming a little bit more popular out west for sure, you know, obviously my brother—he’s a 2001 and I know guys his age in Calgary who’re already committed to different schools, so stuff’s kinda trending towards Canada now, which is pretty cool to see that the NCAA is getting the recognition that it deserves.”

Ferraro on the NCAA

Mario Ferraro was another defenceman who played in Canada’s selection camp who’s currently playing in the NCAA, although he did not make Canada’s final roster. He was drafted into the OHL in 2014 by the Barrie Colts during the 10th round at No. 193. During the most recent NHL Entry Draft, Ferraro was drafted by the San Jose Sharks during the second round at No. 49. Like Makar, Ferraro also felt that the NCAA would provide him with more opportunities to develop.

“I just though college was the best route for me. At the time when I was drafted by Barrie, I was a little bit undersized and I thought that college would get me the best opportunity to grow physically as a player and mentally and so I decided to go there. I chose UMass, I thought there was a great coaching staff, a great school, so I’m happy where I am and we’ve had a good start and I’m excited to see what we can do in the future.” – Mario Ferraro

If we take a look at the actual numbers—Canadians and non-Canadian international players in the NCAA during the 2017-18 season and compare them to players in the 2007-08 season, we’ll see that there’s not much of a difference in numbers for players in Division 1 teams. If anything, the number of Canadian players has gone down (with the exception of the Big 10 Conference). 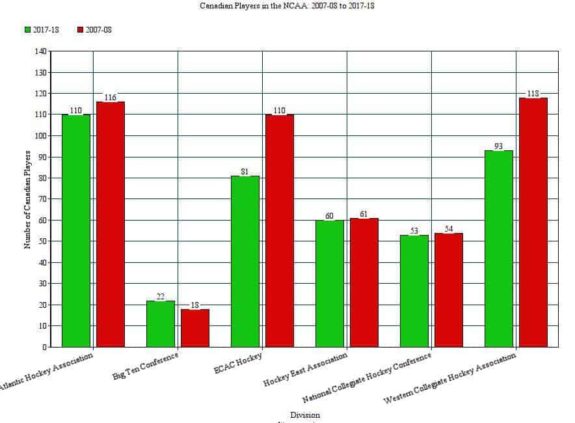 However, we can see that there’s a huge increase in the number of non-Canadian international players who play for Division 1 teams in the NCAA across the board. 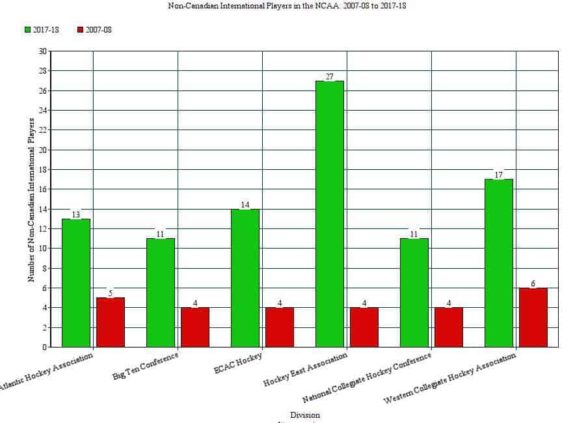 As much as Canada may want its players to be developed in Canadian-based leagues, it may be a better option for them to take the NCAA route to the NHL. Imagine where Makar would be if he didn’t take the route he took. What if he chose the WHL instead? Would he have developed into the superstar he’s become? Would he have ever made it to an NHL draft? Would Ferraro have made it to Canada’s selection camp without help from his NCAA team?

Guys born with God-given gifts may have no problem getting noticed in the CHL, but guys who need more time to develop their craft may have better luck doing it in the NCAA, and that’s simply because they’re given more opportunities to do that there.