Favorites: Minnesota is the obvious favorite to win the whole tournament, having been head and shoulders above the competition all year. They are the first team in history to win every single regular season game. The Gophers’ offense lacked some of its prowess in their last series against St. Cloud State, but they were without three-points-per-game forward Amanda Kessel. Enough cannot be said about the job Wisconsin head coach Mark Johnson and his staff have done this year in Madison, and after earning the #2 seed, the Badgers will hope to go far behind solid team play and junior goaltender Alex Rigsby’s .941 save percentage. North Dakota is another contender; led by Monique and Jocelyne Lamoureux, they will look to their top-six players to lead them deep into the playoffs and help them secure a slot in the NCAA Tournament. But they’ll definitely need to get solid goaltending to help them along as well.

Dark Horses: The Ohio State vs. Minnesota-Duluth series will be filled with gutsy, gritty team play and whoever comes out on the winning end of it will give the higher seeds at the Final Five a lot to handle. With the best-of-three first round, upsets are a hard task for the underdog teams, but Minnesota State is a team who might be up for the challenge; they’ve had some success against top opponents this year.

Favorites: Boston University and Boston College have been neck-and-neck with each other for most of the year, and they enter the postseason as conference favorites. Both teams are deeper up front than the rest of the competition in Hockey East. The Terriers have had some hot and cold stretches, but have been playing well in recent weeks. The Eagles have maintained a level pace for much of the year since finding their stride a few weeks into the season. They are led by sophomore forward Alex Carpenter, who has quietly been one of the most consistent players in the country this season, perhaps second only to Kessel. Northeastern had a few tough stretches throughout the year, but enter the postseason on a hot streak, and are led by star forward Kendall Coyne.

Dark Horses: Providence has got the right kind of philosophy to upset in a single-elimination tournament. They showed that last year when they made it all the way to the Hockey East championship game. Look for freshman forward Molly Illikainen (11 goals, 29 points, 33 games) to make an impact if the Friars make a postseason run this year. And after the way they’ve handled themselves against the league’s top two teams the last two weeks of the season, Vermont is also worth keeping an eye on. Goaltender Roxanne Douville made 53 saves last Saturday to help the Catamounts tie Boston College, 1-1, and if they can get above-average goaltending against Northeastern, they’ll have a shot at an upset again.

Favorites: As the only nationally-ranked team in the conference, Mercyhurst is a heavy favorite in the tournament, although they won’t play until next week because they earned a first-round bye. The Lakers are much deeper than every other team in the conference, especially up front. It’s going to be a tough task for anyone else to beat them, but as we saw last year, anything can happen in the playoffs.

Dark Horses: Syracuse has jumped from last in the four-team CHA last year to second in the league this year, and they’ll definitely be looking to advance to the championship game and try and unseat Mercyhurst. Goaltender Kallie Billadeau will be very important for the Orange; she’s got a .941 save percentage and 1.53 goals against average this season. Robert Morris won the CHA championship last year, upsetting Mercyhurst in the final, and they’ll be looking to make a run again. The Colonials’ Rebecca Vint is arguably the best player in the conference who doesn’t play for the Lakers, but it remains to be seen if they’ve got enough pieces around her to really contend.

Favorites: With just one point separating Cornell, Clarkson, and Harvard, it’s difficult to say who’s got the edge over the other two top seeds. Clarkson and Harvard were playing better in the first half than the second half of the year, while Cornell’s been playing some of their best hockey of the season in recent weeks. The results of these three teams against each other have been mixed, which will make the postseason very interesting. The Big Red are probably the strongest up front, whereas the Crimson and Golden Knights have been better defensively. Harvard in particular boasts a strong blue line. All three teams have very solid goaltending, and it’ll be difficult for anyone to upset any of them.

Dark Horses: Dartmouth is definitely a team to keep an eye on; they’ve got a great defensive mindset, can skate with anyone in the conference, and are capable of containing the opponent’s most productive players. They ended the regular season with a huge 7-2 win over St. Lawrence, and have tied both Cornell and Harvard this year. Quinnipiac also has a good shot at a postseason run, and that may or may not be due to their off-ice talents (see below). The Bobcats have a capable netminder in Victoria Vigilanti, and a good and mostly underrated line-up of skaters led by the electric Kelly Babstock, who’s tied for first in the conference with 28 goals and 55 points. 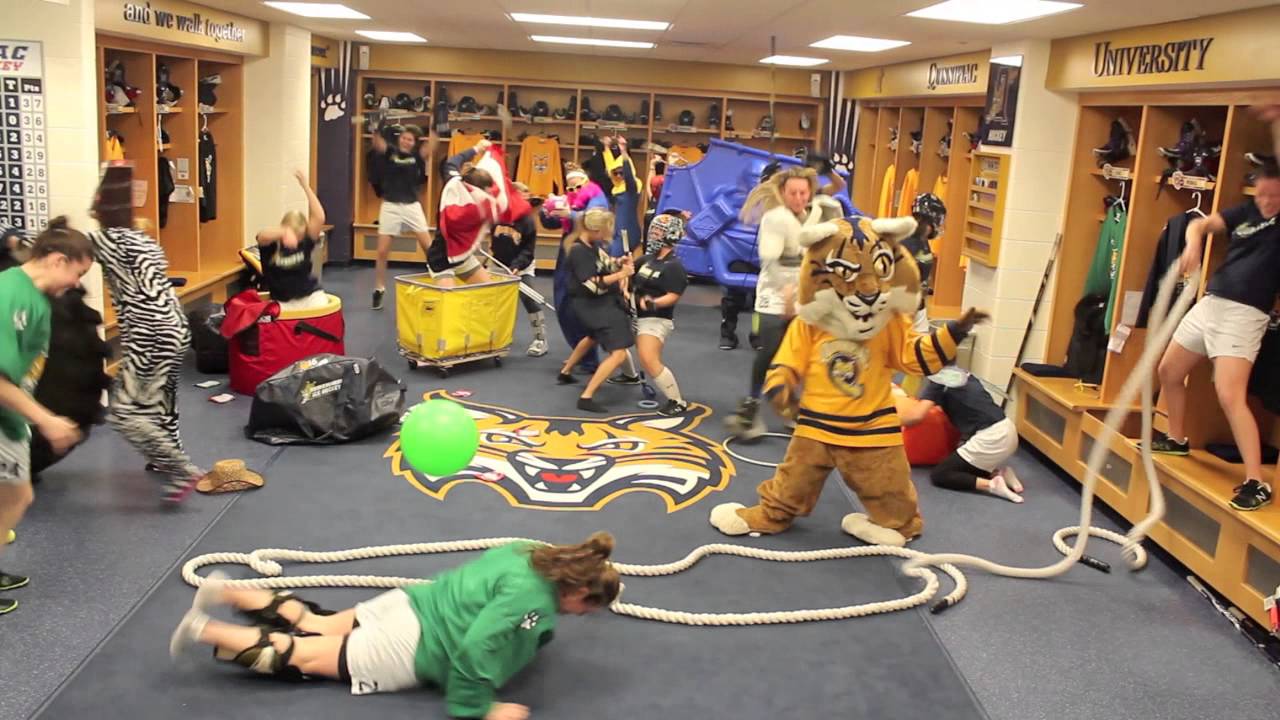