NEWARK, N.J. — Reigning MVP Taylor Hall had two goals and two assists and the slumping New Jersey Devils rode their top line in snapping a three-game losing streak with a 5-2 victory over the Ottawa Senators on Friday night.

Kyle Palmieri added a goal and two assists, Nico Hischier had a goal and an assists and the line finished with nine points as the Devils won for only the fourth time in the last 17 games (4-7-6).

Pavel Zacha ignited the outburst with a short-handed goal and Keith Kinkaid made 25 saves for New Jersey, which is in last place in the Eastern Conference.

Matt Duchene, who missed the last six games because of injury, scored both goals for Ottawa. Craig Anderson gave up five goals on 25 shots before being replaced by Mike McKenna for the third period.

The goal of the game, and maybe the season, came early in the second period with the Devils leading 3-1. Kinkaid made a save on a point shot defenceman Thomas Chabot, but the rebound went to Brady Tkachuk on the edge of the crease. His backhander toward an open net was blocked by sliding Devils defenceman Sami Vatanen and then pushed out of danger by Hischier.

Palmieri pushed the puck away from the net and Mark Stone briefly controlled it and lost it. Palmieri collected it and led a 2-on-0 up the ice, before sliding a pass to Hall, who beat Anderson for his 11th goal of the season and his second in a 72-second span.

Hall had given New Jersey a 3-1 lead with a power-play goal. Palmieri stopped a clearing pass at the blue line and found Hall for a shot from the left circle that Anderson probably should have stopped.

Zajac scored on a breakaway 2:03 after the opening faceoff and Palmieri stretched the lead to 2-0 at 10:54 after being set up by Hall, whose four-point night matched his best of the season.

Duchene netted a power-play goal to cut the lead to 2-1 at 2:20 of the second period, but Hall scored twice over the next three minutes to balloon the lead to three goals. 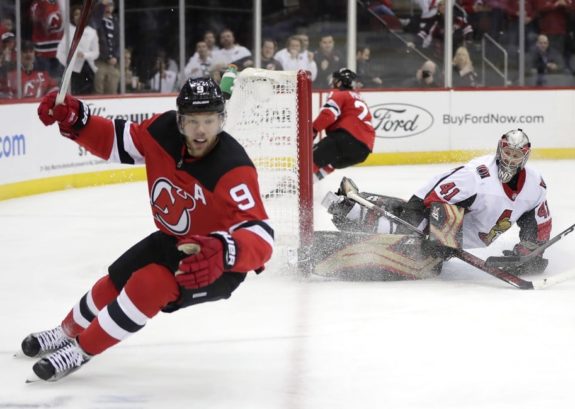 Duchene got his second with the Senators have an extra skater on the ice for a delayed penalty against New Jersey.

Hirchier got his ninth of the season with 1:02 left in the middle period.

NOTES: Devils place F Marcus Johansson on injured reserve and activated F Stefan Noesen off the same list. … Chabot played in his 100th NHL game. … Ottawa was playing its first game since Monday and looked out of sorts. The Devils were playing their second in two nights and seemed quicker, especially early in the game.

Devils: Host Columbus on Sunday in second meeting in four days. The Blue Jackets won 2-1 on Thursday night in Columbus.