Heading into the final weekend of the 2007 NHL season, the New York Islanders needed two things to happen in order to finish in eighth place and make the playoffs. First, the Toronto Maple Leafs had to defeat the Montreal Canadiens on Saturday night. Second, the Islanders needed a win over the New Jersey Devils on Sunday afternoon – using an undersized (5-foot-10, 178 pounds) 28-year-old third-string goaltender, who had a name that few could spell or pronounce: Wade Dubielewicz.

Like any good underdog story, an Islanders scout discovered Dubielewicz on a trip to evaluate one of his University of Denver teammates. After taking notice of the sparkplug netminder, the team signed “Dubie” as an undrafted free agent in 2003.

The goalie sparkled in his first season in the AHL with the Bridgeport Sound Tigers, going 20-8-5 with a 1.38 goals-against average (GAA) and a .946 save percentage (SV%). He regressed to a .910 SV% over the next two seasons in the minors and had only played in nine NHL games over his three-year career to that point.

In 2006-07, his performance ticked up with a .923 SV% in Bridgeport. Islanders starter Rick DiPietro sustained a concussion in late March, and the team recalled Dubielewicz to back-up Mike Dunham. Dunham subsequently struggled after being thrust into the starting role, and coach Ted Nolan, in a desperation change of pace move for a team fighting to make the playoffs, inserted Dubielewicz as the starter.

During the most crucial moments of the season, the third-stringer played with fire, carried the team and quickly became a fan favorite. Endless chants for “Dubie” echoed throughout Nassau Coliseum during each of his home starts. He ended the regular season on a 4-1-0 run, allowing just over two goals-per-game with a .934 SV%.

On Saturday night, the Maple Leafs eliminated the Canadiens from playoff contention in a rollicking, 6-5 barn-burner at the Air Canada Centre – positioning them in eighth place.

All that the Islanders needed to do was defeat their rival in New Jersey and they would be off to face the league-leading Buffalo Sabres for round one of the playoffs. The Islanders jumped out to a two-goal lead on two goals by fourth-liner Richard Park, before the Devils’ John Madden scored to cut the margin in half with 4:13 to go. Madden added a second goal, in a scramble, with less than one second remaining – sending the game to overtime.

Once the game went to a shootout, Maple Leafs coach Paul Maurice (watching from his couch) dreaded what he knew would happen next: the poke check. Maurice proved to be correct more than once. Viktor Kozlov and Miroslav Satan each converted their attempts for the Islanders, while a poke check from Dubie nullified Brian Gionta’s effort in between those turns.

With the game on the line, Dubielewicz pulled the poke check trick out of his hat one more time: 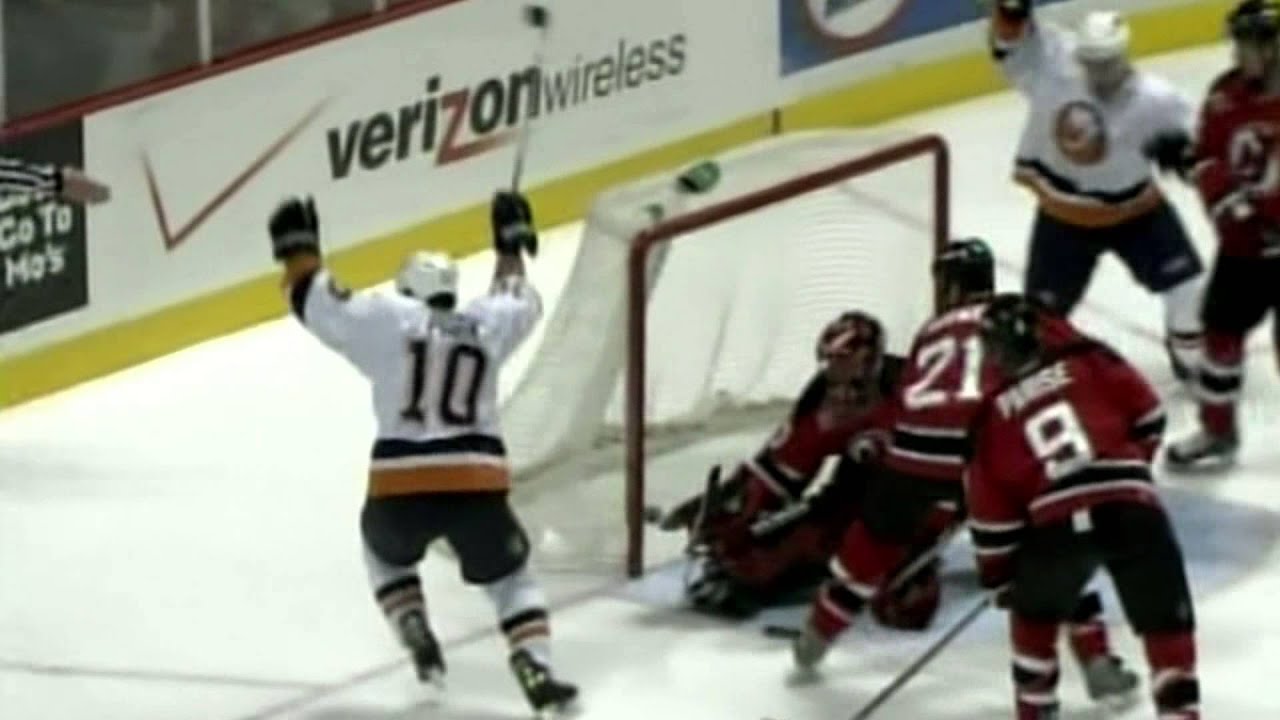 Dubielewicz Always Played to His Strengths

Hearing how Dubielewicz described himself, it would come as no surprise that he loved to use the poke check. After the game, he was quoted as saying that a goalie that is, “two or three inches taller can play three or four inches deeper in the net. At the same time, it makes sense that I’m a little bit quicker than a big guy…I’ve always been told by coaches that I do an excellent job of reading the play. The brain between my ears is probably my best asset. I’ve really got to think about the game and be ahead of the play.”

In the video of the poke check, notice that the split second that Sergei Brylin pulls his right leg back for the fake shot, Dubielewicz slides his hand up his own stick and goes for broke. It was a sublime poke check; his second successful one in minutes, which instantly jumped the Islanders in the standings over both Toronto and Montreal, and into the playoffs.

The moment felt like personal validation for the goalie, who joked, “if you guys would quit writing that I’m a career minor-leaguer, it wouldn’t be so bad…I’ve never really had the opportunity to do anything at this level. So when the chance came, I wanted to make the most of it.”

The Islanders fell in five games in the first round to the Presidents’ Trophy-winning Sabres. Dubielewicz lost Game 1 in Buffalo (stopping 31 of 35 shots) before DiPietro returned from his concussion and took over for the remainder of the series.

Dubie served as the primary backup to DiPietro the following season, going 9-9-1 with a .919 SV% before signing with Ak-Bars in the Kontinental Hockey League. Though he returned to the NHL in short order, he played in just six more NHL games (three each with the Columbus Blue Jackets and the Minnesota Wild) before playing with a pro team in Germany and then retiring.

Dubielewicz currently serves as a coach for the Columbia Valley Rockies in the Kootenay International Junior Hockey League, lives in folklore to Islanders fans and remains an inspiration to third-string goaltenders everywhere.