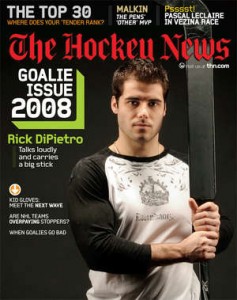 For the past six seasons, Rick DiPietro has seemingly spent more time on the injured reserve than playing NHL hockey. DiPietro’s laundry list of injuries has Islanders fans and NHL fans alike wondering if the American netminder will call it a career anytime soon. However, DP made it abundantly clear to Newsday that he has no plans to retire, even after suffering yet another season ending injury.

DiPietro told Newsday that he knows he can still play, but what will his determination and persistence cost the Islanders?

Having a save percentage of .876 and a goals against average of 3.73 is not helping any professional team in today’s National Hockey League. To make matters worse, DiPietro hasn’t stayed healthy long enough after the 2007-2008 season to prove why New York Islanders management gave him a 15-year, $67.5 Million contract.

Back in the days when ties still existed and Peter Laviolette had the Islanders contending for a playoff spot, Rick DiPietro was a highly valued prospect by one Mike Milbury. Milbury fell in love with the BU Terrier netminder back in 2000 and especially appreciated the fact that DP had more gumption than other prospects by the name of Heatley and Gaborik. DiPietro was selected number 1 overall in the 2000 NHL Entry Draft and was tabbed as the face of the Islanders franchise.

Mike Milbury, Charles Wang, and Sanjay Kumar believed that they had a winner on their hands when they drafted DiPietro with the first overall pick in 2000, but the past several seasons have been trying for the goaltender and Islanders management to say the least. Over the past 4 seasons (328 games), DiPietro has played in only 47 regular season games and has struggled to stay healthy through multiple knee surgeries and a hip surgery.

DiPietro’s fall from grace seemingly started at the 2008 NHL All-Star game’s skills competition when the netminder made a couple of saves, injured his hip, but decided he would still participate in the actual game the next night. DiPietro did not allow a goal in the period that he played, but he was never the same goalie after the All-Star game. DiPietro’s peripheral stats took a serious hit during the second half of the 2007-2008 season and the injury battles ensued shortly thereafter. DiPietro finished with a .902 Save Percentage and 2.82 Goals Against Average, statistics and play that were far from what earned the netminder the All-Star selection.

Despite all of the injuries and complications, DiPietro tried multiple times to get back to playing at an NHL level. Coming into this season, all 3 Islanders goalies (including DiPietro) had impressive training camps, but Al Montoya was chosen to start the first three regular season games for the Isles. When DiPietro was given a chance to shoulder the starting goalie duties this season he delivered a mixed bag of performances. While DP played well against the Sharks and Jets at the beginning of the season, he had shaky performances later on in the season against Boston, Philadelphia, and Dallas.

During the second period of a December 3rd game against the Dallas Stars, DiPietro and the Isles looked as though they were poised to take two points away from the Stars after going up 3-0. Even though Matt Moulson was the talk of the contest after scoring 4 goals in a 5-4 Isles victory, the underlying story was that DiPietro had injured his groin while skating and had given up 3 goals on 3 straight shots, with both events occuring in the second period. Al Montoya was called upon to replace DiPietro at the start of the third and stood tall despite having started the past 4 games. With Montoya’s effort, DiPietro actually registered the win and improved his overall record to 3-2-3 on the 2011-2012 season.

Once again, DiPietro returned to the injured reserve and started working toward a comeback until he re-injured himself and it was announced that the netminder would have to go under the knife yet again.

So where does this leave us?

Your guess is probably as good as mine. Islanders management has stuck by DiPietro throughout all of his trials and tribulations, 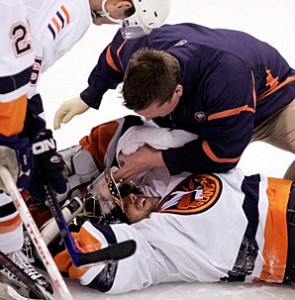 but the Isles’ fan base is starting to have their patience tested (as if it hadn’t been running thin already). With all of his surgeries, Rick DiPietro is starting to resemble the 6 Million Dollar Man, minus the pop-culture icon following that Lee Majors developed. At some point DiPietro must think about himself and his future after hockey.

Having surgery on both knees and a hip as well as sustaining multiple concussions can ruin any NHL player’s dreams. For DiPietro it is that much worse since he (as a goalie) must constantly rely on knee and hip movements to make saves. Add in a sports hernia surgery that he must recover from and it seems that DiPietro has experienced every lower-body injury that a goalie can experience.

Advancements in medicine and technology have allowed professional sports players to enjoy lengthy careers, but any athlete will undoubtedly experience adverse effects when they get older if they haven’t treated their body correctly. I’m not saying that DiPietro hasn’t taken care of himself, but at some point all of these injuries and surgeries will take a toll on his body, especially if he believes that more playing time is in store for him.

The New York Islanders seem to be sticking by Ricky once again, but will such a decision do more harm to the organization than good? That is yet to be seen.

For the past several seasons, DiPietro has been a sure-shot for one thing in particular, getting injured. While it is not DiPietro’s intention to constantly re-injure himself, he has to recognize that he is costing his team time, money, and potential. As long as DP remains on the Island, management will have to play him since it’d be ludicrous to have a $67.5 Million player stowed away and riding the pine. Even though DiPietro might feel relatively “healthy”, he might not be the player he was pegged to be in the early 2000s and could cost others (cough, Al Montoya, cough) a shot at legitimate playing time.

With the Isles stockpiled on goalie talent (Koskinen, Nilsson, Poulin), it is tough to see a future for DiPietro if he is constantly on the IR.

DiPietro should strongly consider retirement when this year’s offseason rolls around. Recouping a little bit less than $40 Million will be tough for DP if he and the Isles choose to part ways, but the goalie’s relationship with Charles Wang will probably merit him some sort of position within the organization if he chooses to hang up the skates. If a new Collective Bargaining Agreement allows a one-time special buyout of a player, Wang must immediately take action and rid himself of dead weight. It was not too long ago that Doug Weight attempted multiple comebacks to the ice despite a plethora of injuries, but Weight chose to retire rather than having his body suffer more consequences in the long run.

DiPietro plays the butterfly style of goaltending and such a style of play is physically taxing on any netminder. If DiPietro wants to return to the ice yet again, then he must strongly consider an alteration of style (maybe the hybrid that Brodeur uses), at least for his own sake. However, DiPietro should seriously weigh all of his options and pick the one that will best suit his life after the NHL.

Rick DiPietro is not a villain or an individual that is purposely trying to milk the Islanders organization for money. After all, it wasn’t as though DiPietro demanded such a lengthy contract. He did what any player would do in order to ensure his long-term stay in the NHL by signing the contract given to him. DiPietro is actually a great individual that cares for the hockey culture on Long Island and would like nothing more than to help restore the Islanders to glory. However, personal wants must sometimes be set aside for the betterment of the team and DiPietro must realize that he is occupying a roster spot that demands the utmost durability and versatility, something that he may no longer possess.

5 thoughts on “Is It Time For Rick DiPietro To Retire?”