The Islanders are coming. That’s according to many NHL insiders and experts. Everyone points to a loaded talented young roster that is gaining more experience every season. The Islanders are closing in on taking that next big step, that we see the Tampa Bay Lightning making this season. What New York Islanders fans also have to be very excited about is there is another wave of top kids closing in on joining the main roster. The Isles have 3 elite prospects in Michael Dal Colle, Griffin Reinhart and Ryan Pulock. Then the Isles have 2 more strong prospects in Scott Mayfield and Josh Ho-Sang. The Islanders are built for a long exciting run. 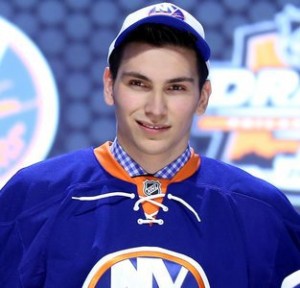 If one good thing came out of the Islanders disappointing 2013-14 season was the fact they had two 1st round picks in last years draft which turned into Michael Dal Colle and Josh Ho-Sang. Dal Colle low end projection is a 2nd line core forward with intangibles off the charts. Dal Colle ceiling is a first line forward and a partner for John Tavares for years to come. However in all likelihood Dal Colle and Islanders fans will have to wait a bit longer to see him make contributions with the big club. By his own admission in a recent NHL Live interview Dal Colle said “he had to get bigger and stronger for the NHL level”. Keep in mind Dal Colle is only 18 and another season developing at the junior level is a good thing long term. Dal Colle experience in juniors this year ended up with a Memorial Cup championship. A year from now we will be talking about Dal Colle with a realistic chance of being part of the Islanders roster. Josh Ho-Sang is a highlight waiting to happen. This kid’s skill is ridiculous but now he needs to translate it into the team concept to make at the NHL level. Ho-Sang will most definitely go back to junior next season and will probably need a bit more time to develop than Dal Colle. But he will be with the Islanders sooner rather than later. Check out this highlight reel goal.

As I wrote in my previous article the Islanders are one of the deepest teams in terms of NHL organizations with defenseman. The difference between the Islanders top prospects on defense versus their forwards is their defenseman are knocking on the door to play at the NHL level now. With as many as two openings come opening night we could see 2 out of the Islanders 3 top defense prospects suit up in Reinhart, Pulock and Mayfield. It’s almost a guarantee one of these top prospects will be part of the Islanders from Game 1 on next season. Reinhart is a big defenseman that does everything well, Pulock is a big defenseman that is great on the power play with a killer shot and Mayfield is strong physical defensive defenseman. It would not be the end of the world for any of these 3 kids to start the season in the AHL with the Bridgeport Sound Tigers next season and to continue to develop their game. Even if that does happen all 3 of these kids will make contributions for the Islanders next season. There is also the possibility that one of these 3 top defense prospects is a center piece in a trade to help the Islanders take that big step forward next season.