On Jan. 17, the NHL introduced a new technology that will be available in February to all 31 NHL teams and their coaching staffs. The NHL, in partnership with software company SAP and tech giant Apple, has developed a new app called the SAP/NHL Coaching Insights App for iPad which, according to NHL.com “… will serve as a complement to the three iPads already on the bench that provide coaches with real-time video.”

The video technology currently available to NHL coaches on the bench since the playoffs in 2017 has been widely accepted and utilized by both coaches and players alike. Coaches access the video to assess referee calls, and most importantly, to challenge goals scored by the opposition when they believe the play was offside, the puck was deflected with a high stick or there was goaltender interference limiting the ability of the goalie to stop the puck. Many players use the video as a source of instantaneous feedback to help improve both their individual and team play.

The landscape has now changed for coaches in the NHL with the new iPad Pros. Each team will receive two devices, with one iPad on the bench and one for the video coach. The technology platform offers the coaching staff real-time information with a multi-touch interface and full portability. The app can currently provide as many as 60 different statistical metrics with coaches having the ability to customize the program based on the statistics they feel are most relevant for their team needs.

The first version of the app will be available for the public to view at this weekend’s NHL All-Star celebrations in San Jose. NHL coaches will have access to the first phase of the new technology next month following online training sessions offered by the league. Over time, the app will be changed based on the feedback provided by the coaches. “This is version 1.0,” according to SAP Vice President of Global Partnerships, Dan Fleetwood. “We will first see how coaches embrace the technology, then make the necessary adjustments to fulfill their needs and expectations.”

The genesis of the app started last summer and at the 2018 NHL Draft. SAP invited the teams’ video coaches to conduct meetings and collaborate on the key metrics they would like to see incorporated into the app. “The objective of the sessions was to get a good sense of what metrics would be most valuable to coaches during real-time game conditions. At the top of their list were time on ice (player usage) and face-offs,” according to Fleetwood. 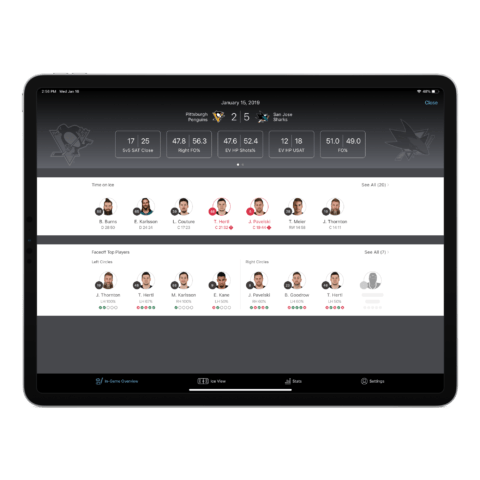 Fleetwood believes this new technology will make coaches more efficient and effective, both on the bench during games and between periods. He suggests “An advantage will be that the data will be available immediately between periods, without having to wait for video coaches to urgently compile statistics so the coaches can analyze it, share the results with the players, and make the necessary adjustments.”

The key to the success of this initiative appears to be giving the coaching staff what they need to improve their game management skills, and real-time feedback to the players to help improve their performance results. SAP is hoping the buy-in comes immediately. “We need to demonstrate the value to the coaches right from the start of the launch. It’s about offering the metrics that they want and building the platform from there. As for the players, the more information they can get from the coaches on their performance results, the more engaged they will be,” claims Fleetwood.

When asked about what the bench management model might look like to best utilize the technology during games, Fleetwood said that would depend on whether individual teams embrace the data that the app can provide. “My guess is that the video coach will be entrusted with providing this information to another coach on the bench.”

Could we see 31 new coaching positions created with this technology? Will this create an opportunity to hire a Coaching Insights App bench coach to concentrate exclusively on the valuable real-time data provided by the program? The customary three coaches (head coach and two assistant coaches) we see behind the bench during games are already challenged in their roles as bench managers. 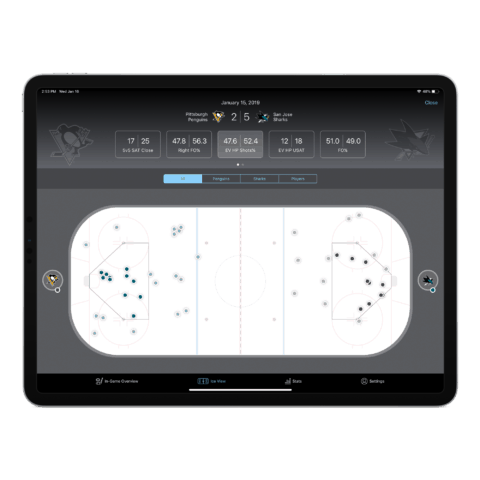 Have you noticed the significant increase in the number of “too many men on the ice” penalties? Two known facts explain the increase in Rule 74 infractions. The game is faster, which creates more confusion for both players and coaches when players are changing “on the fly.” Second, because of the increased speed of the game and the physical demands that the players face, they are forced to reduce their “time on ice” (TOI) each shift. A symptom of this evolution in hockey is there are more line changes each game, which ultimately increases the frequency of mistakes made by players and coaches during “on the fly” line changes.

Adding the statistics loaded app to the mix during the game will likely require the undivided attention of a coach on the bench. That added responsibility will become more challenging as the number of available metrics increases. Despite the added burden, Fleetwood hopes that coaches become better bench managers with the new app. “As coaches become more reliant on this data to improve their game management, they will be looking for more metrics to analyze and improve individual player and team performance.”

The parity we have witnessed over the last five years in the NHL is a result of the league salary cap, revenue sharing, the NHL entry draft and the fact that teams now receive a point in the standings for an overtime or shootout loss. Given these circumstances, teams are looking for ways to differentiate themselves from the competition by hiring experts like performance coaches, skills coaches, nutritionists and psychologists to improve player performance.

Some NHL teams have adopted analytics as an essential ingredient for success and believed its adoption is a difference-maker. Many of these teams will be enthusiastic supporters of this new app and see the value it can bring to the table. Others might fail to accept it as a valuable tool to improve franchise success because, as Fleetwood explains “There is still a divide amongst different teams as far as acceptance of analytics is considered.”

The NHL, SAP and Apple have partnered to cater to the teams that are prepared to embrace analytics as a valuable assessment tool and understand that real-time metrics could change a team’s game plan during an actual game. According to Fleetwood, “Those that understand the metric and know how to interpret it will benefit from this technology platform the most. It will be interesting to see how it evolves.”