The 2015 NHL Entry Draft is fast approaching, taking place in Sunrise, Florida on June 26 and 27. In anticipation of one of the most exciting days in the hockey season, we present more draft trivia, this time with some WHA draft history included. See Part I here.

The Time Someone Drafted a Soviet Leader

The first general player draft conducted by the World Hockey Association (WHA) qualifies as the most entertaining draft in hockey history. In his equally entertaining book The Rebel League, Ed Willes calls it “one of the signature events” of the seven year history of the WHA. In all, the newly formed teams drafted almost 1,100 players, many of whom were not even available. That included the very last pick of the draft, 68 year-old Soviet Premier Alexei Kosygin.

The New Jersey Devils drafted Soviet hockey superstar Slava Fetisov at number 150 in 1983, setting in motion an incredible story of how the Devils’ Lou Lamoriello eventually succeeded in bringing the defenseman stateside to play in the NHL. However, this was not the first time Fetisov, who would win two Stanley Cups with the Detroit Red Wings, was drafted: the Montreal Canadiens took him at number 201 in the 1978 Draft.

The Draft Before The First Draft

The NHL began its Amateur Draft in 1963, but technically speaking, the NHL had actually conducted a draft six years prior, in 1957. This was the first of 13 so-called Intraleague Drafts. The Intraleague draft allowed teams to draft players from other teams. Each team was able to protect most of its roster from being snatched in this draft, although the teams that finished with the worst records were able to protect more players. The order of the Intraleague draft wound up benefiting teams drafting last. For example in the 1971 Intraleague draft, with the number 11 pick, Buffalo took future star Rene Robert from the Toronto Maple Leafs. With the number 19 pick, the Penguins took Robert from the Sabres. He would only become part of the famed French Connection after the Penguins traded him to Buffalo for Eddie Shack less than a year later. Robert is one of several examples of players being claimed twice in the same Intraleague draft. The NHL held Intraleague Drafts in 1957 and then every year from 1963 through 1973, except in 1967 (likely because of the expansion draft that year).

The Best 183rd Overall Pick of All Time 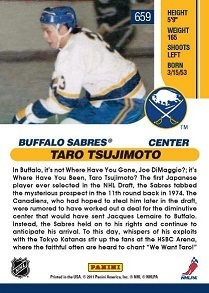 Bored stiff during an endless 1974 draft that took place by conference call, Buffalo Sabres GM Punch Imlach drafted a Japanese hockey player named Taro Tsujimoto. In what is the greatest draft day gag of all time, Tsujimoto never played in the NHL because Imlach made him up. Fans can still be seen wearing his jersey to Buffalo games to this day, and in 2011 his legend was finally dignified with its own rookie card. 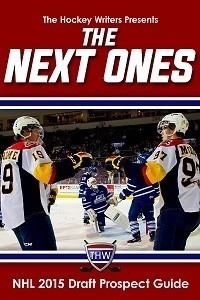 For coverage of over 150 prospects in the upcoming draft, check out THW’s The Next Ones: NHL 2015 Draft Prospect Guide, available for the Kindle and all other e-reader formats. It is also now available at iTunes.