In the spirit of the Hallmark-created holiday of St. Valentine’s Day, this week we take a look at what I love about each of the NHL’s 30 teams — in addition to ranking them (last week’s ranking in parentheses). Ironically, the week leading up to the holiday of love featured a couple line brawls and a somewhat embarrassing brawl between the Islanders and Penguins. 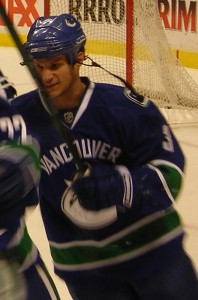 4. (6) Detroit (34-16-6): When the Red Wings are on, like they were this weekend against Boston, there is not a more fun team to watch: puck control, patience, and artistry on ice. Not to mention, Nicklas Lidstrom is an amazing physical specimen at 40 years old.

5. (4) Pittsburgh (35-19-4): Some people love him, some hate him, but Sidney Crosby is the league’s best player. Kris Letang and Marc-Andre Fluery are not too bad either!

8. (8) Dallas (31-19-6): Brenden Morrow and Brad Richards are great leaders and Loui Eriksson and Stephane Robidas are amongst the most underappreciated players in the NHL.

10. (9) Montreal (31-20-6): I loathe having to say something nice about the Canadiens, but Hal Gill went to the high school where I currently teach and coach hockey. He gives something back every year and is one of the nicest guys in the game. Mike Cammalleri is a great player too. 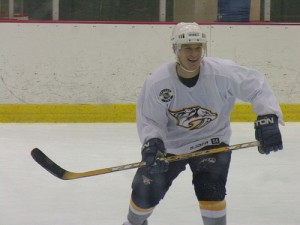 Ryan Suter and Shea Weber have led the Nashville defense.

young defensemen in the game, and the Mike Fisher trade may be a key to the Preds’ playoff success.

12. (12) Los Angeles (31-22-3): Jonathan Quick is an underrated and underappreciated goalie. He has brought the Kings back to life.

13. (14) New York Rangers (30-24-4): Brandon Dubinsky and Ryan Callahan are tough as nails and they do whatever it takes to win. You have to respect guys like that.

16. (16) Minnesota (30-20-5): Brent Burns is a tremendous defenseman and Cal Clutterbuck has one of the best names in sports (former Sacred Heart University standout Bear Trapp still holds that honor).

NHL Best of the Week

20. (21) Buffalo (26-22-6): The way the Sabres have played their way back into the playoff race is admirable. If they get in, they will make life tough for someone in the first round (especially if it’s Boston).

22. (23) St. Louis (24-21-9): Alex Steen is an underrated talent and David Backes’ candidness about wanting to hit whoever didn’t pick him in the all-star game was refreshing.

23. (22) Atlanta (25-23-10): Craig Ramsay is one of my favorite people in the game, and Ondrej Pavelec’s return from a bizarre fainting spell in the year is amazing.

25. (27) New Jersey (22-30-4): Love the fact the Devils are still fighting and are at the back end of a playoff hunt. They may not make it, but they deserve credit to continuing to improve and play well. 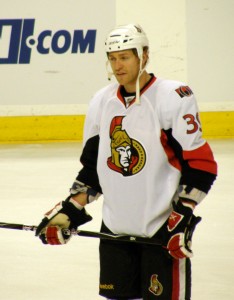 Matt Carkner might be a tough guy on the ice, but off the ice, he works with children with special needs. - Photo/Dan4th

26. (20) Colorado (25-25-6): The Avs have some great young talent in Matt Duchene, Chris Stewart, Paul Statsny and Kevin Shattenkirk, and I love they gave the legendary Peter Forsberg another shot – even if it didn’t last long.

29. (29) Ottawa (18-30-8): This was a tough one. There’s not much to love in Ottawa right now. I’ll go with Matt Carkner’s work with the Capital City Condors, a hockey team for kids with special needs. Andrew Rodger looked at his work a few weeks ago: https://thehockeywriters.com/capital-city-condors-helping-kids-take-flight-in-ottawa/

(Steve Kendall is a freelance writer with 20 years experience covering hockey at all levels. In addition to thehockeywriters.com, he has written for The Boston Herald, The New England Hockey Journal, and The Worcester Telegram & Gazette.)