The competition to recruit elite hockey prospects amongst North American leagues is fierce. Those players who are looking to develop their skills and feed their professional aspirations, while laying the educational groundwork for life after hockey, have several options to consider.

The road to a professional hockey career has traditionally been via the CHL in Canada and the NCAA and USHL in the United States. The number of players drafted by NHL teams from these leagues has been relatively consistent over the last five years with the CHL dominating as the primary source of professional talent:

Where young players choose to play is based on where they feel they will best develop into professionals and what educational opportunities the league provides. I faced the same decision over four decades ago.

Last year was my 40th anniversary as an alumnus of the University of Pennsylvania where I played four years of NCAA Division I hockey. Yes, I am dating myself by sharing this memory. However, it is interesting to note that back then I faced the same decisions as young players face today. The landscape may have changed considerably in the world of elite hockey since then, but the choice of where to play remains a challenge for hockey players and their families.

As a midget-aged player, I was invited to the OHA Peterborough Petes camp by NHL Hall of Fame coach Roger Neilson. During training camp, I was asked to play in some preseason exhibition games. However, I was informed by some of the other players that if I agreed to play, I would relinquish my eligibility to play NCAA hockey in the future. Even though there were no players recruited from my hometown of Halifax into the NCAA in the past, I decided to keep my options open and headed home.

Today, North American players as young as 14 years old face the same decisions. The question facing most elite prospects is: If a CHL team drafts me, do I play Major Junior Hockey or do I commit to an NCAA university or USHL program in the United States?

NCAA recruiters are permitted to talk to potential recruits as early as January of the players’ grade-10 year. The CHL’s Western Hockey League (WHL) can protect players as young as 14 years old, while the Ontario Hockey League (OHL) and the Quebec Major Junior Hockey League (QMJHL) draft players 15 and 16 years old. According to WHL commissioner Ron Robison, “Players at 14 or 15 are making decisions. That’s really been the reason top players in the U.S. have come to us.”

What are the advantages and disadvantages of these three leagues and the opportunities they present for personal player development both on and off the ice as well as educational opportunities? 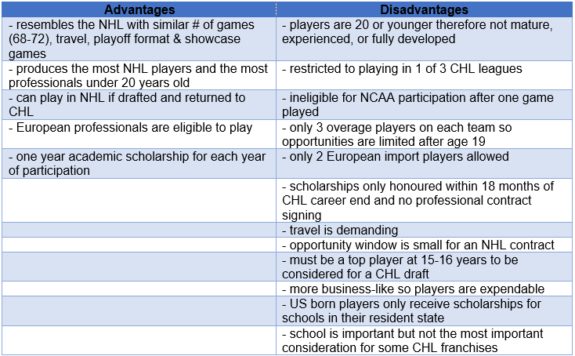 Following a detailed comparison like this, we can only conclude that the age-old question of which opportunity is best will remain unanswered. According to Shawn Reznik of The Hockey Writers, “Some believe the CHL is a surefire route to the NHL. Given the recent amount of graduates from the CHL to the NHL, that point is difficult to argue. Others say the NCAA develops players into better all-around athletes making them better prepared for the physical workload needed to endure the rigors of the NHL.”

While both of these arguments hold water, the real reason young players and their families choose a particular path for their development is a personal choice. All three opportunities cater to different priorities and expectations.

Players that are drafted by a team close to their hometown may want to play in the CHL because they are close to their families. Others may aspire to attend a prestigious Ivy League school like Harvard which offers an excellent hockey program combined with a world-class education. The opportunity to play for the US Hockey National Team Development Program may be attractive to US-born players because they compete in the USHL, in addition to representing their country in select international tournaments during the season. The debate continues.

I chose the NCAA because I was given the opportunity to play for an Ivy League Division I school on a full athletic scholarship in a great NHL hockey city like Philadelphia. The bonus was the Flyers won the Stanley Cup during two of the four years I attended Penn, and I was on a first name basis with many of the “Broad Street Bullies” as they practiced at our campus arena. Priceless!