It has been two years since the NHL adjusted its conferences to two divisions apiece, and shifted two teams to the Eastern Conference and one to the Western Conference. In that time, all three teams have seen success in their new divisions and the league itself has benefited from the competitiveness of all four divisions as a result. Here’s a look at these three teams and their potential success going forward.

The Detroit Red Wings didn’t necessarily need to be moved to have success, considering before their move after the 2012-2013 season they had made the postseason 22 straight times, but the change of scenery really hasn’t phased the Original Six team much.

The Red Wings are arguably the most compelling move of the three in the realignment. Detroit wasn’t exactly dealt an easy hand with their move to the Eastern Conference. They went from the Central Division in the Western Conference with playoff-caliber rivals like the Chicago Blackhawks, St. Louis Blues and even the Nashville Predators to the newly-structured Atlantic Division in the Eastern Conference which had four playoff teams from the Northeast in the Montreal Canadiens, Boston Bruins, Toronto Maple Leafs and Ottawa Senators. Bringing a team in Detroit into a Division with so many playoffs teams and three members of the Original Six there was bound to be some added excitement, and they didn’t disappoint.

With the surprise emergence of a young, offensively talented Tampa Bay Lightning team into the Atlantic Division in the team’s first year in the East in 2013-14, the Red Wings found themselves facing just as tough a division, if not tougher. They ended with 93 points, good for fourth overall in the Atlantic, took the second wild-card spot in the East and were bounced in the first round by the division-rival and President’s Trophy winning Boston Bruins in five games.

Not knowing how the Wings would adjust to the East’s more physical style of play, teams across the conference now knew after their first full year that Detroit going to be a team to watch, and they were again this past season. With the Canadiens and Lightning once again having good seasons and a dip in performance by the Bruins, the Wings improved to third in the division with 100 points, one ahead of the fourth place Ottawa Senators, but once again could not get past the first round of the Stanley Cup playoffs, falling to the second-place Tampa Bay Lightning in seven games.

Still a consistent playoff team in their new conference, the Red Wings are fitting in nicely in the Eastern Conference. With star players like Pavel Datsyuk and Henrik Zetterberg leading a crux of young players with a fantastic farm system that will now be coached by Jeff Blashill who knows most of them very well, expect Detroit to still be a factor into playoff hockey for years to come.

Speaking of a move East, the Red Wings’ divisional partner, the Columbus Blue Jackets, also made the move across conference. A team without the incredible resume that Detroit had, not much was expected from the Blue Jackets immediately after their moves, but they ended up surprising a lot of people. 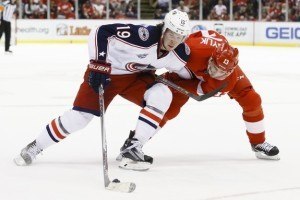 The Blue Jackets parted with the Red Wings in their new conference and ended up in the newly formed Metropolitan Division which, like the Atlantic, also had four playoff teams in 2012-13: the Pittsburgh Penguins, New York Rangers, New York Islanders and Washington Capitals. Being only one point out of a playoff spot in the lockout-shortened season the year before, nobody was quite sure if that was just a flash in the pan or if the Blue Jackets were on the rise. Well early on in the 2013-14 season it became evident that they were not going anywhere anytime soon. They ended up holding off the Capitals in the division by three points and were just edged by the Philadelphia Flyers by one, earning 93 points anda  43-32-7 record in their first season in the East. Their performance earned them the first wild card in the East, where they impressed many in their first round matchup by taking the Metropolitan Divsion champion Pittsburgh Penguins six games.

With tons of momentum heading into this season many expected a similar performance from the young Blue Jackets, but it was not in the card. Columbus was riddled with injuries to key players all season long, including goaltender Sergei Bobrovsky, and were near the bottom of the Metro and Eastern Conference for much of the season. When the team finally started to get healthy, however, they returned to the form they were at in 2013-14 and ended the season 9-0-1 in their last ten games and 89 points overall, just ten behind the Senators and nine behind the division-rival and eighth seeded Penguins. If health is not an issue next year, the Blue Jackets can once again find themselves fighting for a playoff spot like they did in their first year post-realignment. And with the youthfulness of the team, they could be a force to be reckoned with for years to come.

Last, but certainly not least, are the Winnipeg Jets. Forget changing conferences, the former Atlanta Thrashers have had a lot to deal with in the past five years. The team relocated north of the border before the 2011-12 season to a place that hadn’t had a professional hockey team since the original Jets left in 1996. Out of place in the Eastern Conference’s Southeast Division with the Washington Capitals, Carolina Hurricanes, Lightning and Florida Panthers, if there was one team that really needed to move in order to not have to travel as far to their inter-division opponents it was the Jets.

From Growing Pains to Seeing White

Despite the extra travelling, in their last season as members of the Southeast Division the Jets managed to come in second with 51 points and came just four points out of a playoff spot to the Islanders. So moving to a revamped Central Division with the three original teams (Blues, Blackhawks and Predators) and the addition of the Colorado Avalanche, Minnesota Wild and Dallas Stars and having to travel more north-south as opposed to east-west, the Jets had a good opportunity to improve themselves and make a run at the playoffs in their new conference.

Unfortunately for Winnipeg, that was not the case. Five teams ended up making the playoffs in the 2013-14 season in the Central, but none of them were the Jets. The Hawks and Blues once again found themselves in the playoffs, while the Avalanche had a breakout season, winning the division, followed by the Wild and Stars.  In fact, the Jets ended up having the worst record in the division posting 84 points, four behind the Predators.

With everyone anticipating another good year for the Central Divsion, the Jets were going to have to show something spectacular this season in order to make the playoffs this past season. Once again five teams made it, but this time Winnipeg was a part of the group. A down year for the Avalanche and a year of vast improvement for the Predators were the only big differences atop the division, but the Jets were able to outlast the Stars, posting 99 points to Dallas’ 92, and make it to the playoffs for the first time since they were the Thrashers in 2007. It was also the first time Winnipeg saw a playoff hockey game live since the original Jets moved to Arizona in 1996, so naturally the city was excited.

The Jets’ White Out was one of the most incredible scenes in the Stanley Cup playoffs this season, and despite a four-game sweep at the hands of the West’s top team in the Anaheim Ducks, the city of Winnipeg was loud throughout the two games the Jets’ hosted and were even louder when they sent their team off after being eliminated. The incredible support from their fans and improved play this season shows that the Jets have adjusted nicely to their new surroundings out West. And hockey fans everywhere should want the Jets in the playoffs for the next few years, given how incredible the atmosphere is in that arena for playoff hockey.

With 16 teams in the East and 14 in the West and constant talk of expansion in the league, this could have very well been just the beginning of the NHL’s realignment plan over the next decade. With the possibility of a team in Vegas picking up steam and the uncertain future of the former Jets and now Arizona Coyotes, the stage is set for another two teams to enter the league, if not more. When and if more teams enter the NHL, whether they be in Seattle, Vegas, Quebec City or elsewhere, there is a chance more teams might have to relocate and the NHL will be fortunate if their realigned teams adjust as quickly and as effectively as the Red Wings, Blue Jackets and Jets did.