The Hart Memorial Trophy is awarded to the National Hockey League’s most valuable player. It is an award generally given to a player with the best stats on one of the better teams in the league. But the timeless argument about the recipient of an MVP award is whether or not it is given to the player that gives the most value to his team. Numbers matter when determining the Hart winner, but should the award be given to whomever scores the most goals or points? 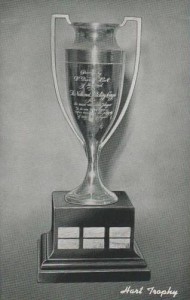 For the most part, scoring is the biggest factor to the voters but some argue that a goaltender is a team’s most valuable player, while others will say that, much like pitchers in Major League Baseball, goalies have their own award. The same goes for defensemen (Chris Pronger in 1999-00 was the last rearguard to receive the award).

So, when quantifying the Hart Trophy candidates, generally, you have to look at the best forwards in a given year. For the 2016-17 season you have to take a long look at the Tampa Bay Lightning’s Nikita Kucherov.

The 23-year-old has been to the Lightning what Dave Grohl is to Rock music: keeping something moribund breathing. Kucherov has been valiant in his efforts to push the Bolts through to contending for a playoff spot, and that warrants some Hart Trophy consideration.

Among the offensive leaders in the NHL, Kucherov’s name appears in nearly all of them. The Russian right winger is tied for eighth in goals (31), ninth in points (69), third in power play goals (14), sixth in power play points (26), and is one of only 11 skaters to average over a point-per-game (1.10).

The overall numbers are impressive, but what really stands out is what Kucherov has been doing since the All-Star break on Jan. 30. He has produced a 12-13-25 line while being a force on the power play. The Maykop, Russia native has the second-most power play points since the break with 10.

All of those numbers are better than what Hart front-runners Sidney Crosby and Connor McDavid have done since the All-Star break.

Value to the Team

No one has been more valuable to their team than Kucherov. It has been no secret that the Lightning’s offense has struggled for most of the season. Steven Stamkos and Ryan Callahan haven’t played since Nov. 15 and Jan. 7, respectively, and both Tyler Johnson and Ondrej Palat have missed time this season, the former currently being sidelined and Stamkos’ return is uncertain.

Yet the Bolts are still in the hunt for playoff spot (one point behind the Toronto Maple Leafs for the second wild card spot in the Eastern Conference).

There is definitely a correlation between the Lightning’s late season surge and Kucherov’s offensive explosion in the last month and a half.

On Jan. 31, the Lightning had 50 points and were the third worst team in the East. Since then, they have 27 points (77 overall) and have gone from 14th in the East to ninth.

Without Kucherov’s Hart-worthy performance all year, especially what he has done since the All-Star break, the Tampa Bay Lightning would be dwelling in the NHL basement, in line for a top-5 pick in this year’s draft in Chicago.

Crosby, McDavid, Patrick Kane and Brad Marchand are the names most linked to the Hart Trophy, but Kucherov’s name should be as well. His play warrants it and so does him carrying his team like Rooster Cogburn carrying Mattie Ross to safety.

Make no mistake, Kucherov is the Lightning’s MVP and if he leads them to the playoffs he has to be a finalist for the league’s as well.

Graduated with a Bachelor’s Degree in Journalism from Western Illinois University, where I also played 4 years of Rugby.