After a long stalemate, the New Jersey Devils and Miles Wood agreed to a new contract on Sept. 22, that will pay him an average of $2.75 million per year over the next four years. The left wing finished 2017-18 with 19 goals and 32 points, both of which were career highs. Here’s how the Devils made out with their latest signing, as well as what it means for the team’s long-term plans.

There were a handful of notable RFA signings this summer, but who comes closest to Wood’s? Sam Reinhart, who just re-signed with the Buffalo Sabres, is similar in age but has produced at a higher rate than Wood. The closest comparison seems to be Ondrej Kase of the Anaheim Ducks.

Kase’s new contract, which he signed earlier this summer, pays him an average of $2.6 million a year over three years. He finished the year with 38 points — six more than Wood — in 66 games played. The two players also had similar results at five-on-five, which the following graph will show. 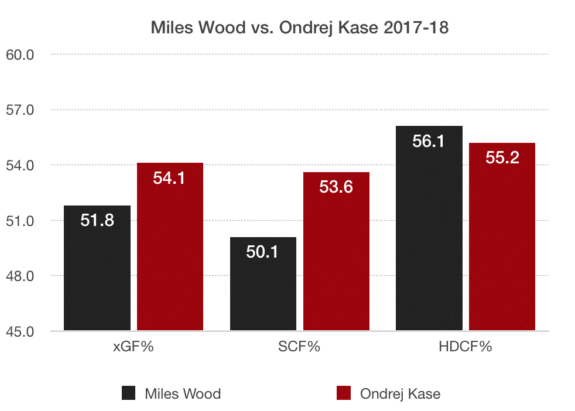 They both generated scoring (SCF%) and high-danger chances (HDCF%) at a high rate. Each team was also expected to score more (xGF%) with them on the ice. In terms of individual production, both Wood and Kase were among the best on their teams. Wood averaged 2.02 points per 60 minutes (P/60), while Kase averaged 2.27 P/60, both of which were in each team’s top five.

The Ducks got great value when they re-signed Kase. Considering there’s a $150,000 difference between his and Wood’s deal, the Devils are in a pretty good spot themselves. They’re similar in age and production. They’ll also be RFAs at the end of their current deals, which is another significant plus.

Wood Returns to the Devils at the Perfect Time

The Devils only have three preseason games left on their schedule. Wood’s roster spot was never in doubt, even as he held out, but he returns to the team at the perfect time. He’ll now have the chance to get back up to speed before meaningful games begin in a couple of weeks.

As they still search for chemistry up front, Wood now becomes part of the conversation for a top-six role. He’ll have to earn it, but his numbers suggest he’s up for the task. He’s a high volume shooter and creates a number of good chances. Those are both attributes you look for in a top-six forward.

There are a couple of combinations Devils head coach John Hynes can experiment with using Wood in a top-six role. He saw a bit of time with Kyle Palmieri and Pavel Zacha in 2017 and fared well in a small sample size. Marcus Johansson’s passing ability also makes for an interesting fit, especially with the volume of shots and chances Wood creates. The remaining preseason games make for the right time to find a good fit.

Wood figures to be an important part of the Devils not just in 2018-19, but for the remainder of his contract. “We are excited to have Miles under contract for the next four years,” said Devils general manager Ray Shero in a press release on Saturday afternoon. “With his style of play, he’s a big part of what we are collectively building here in New Jersey, now and in the future.”

The Devils play a fast style of hockey, which is a natural fit for Wood. He’s one of the team’s fastest skaters, if not the fastest. He also has a physical edge to his game and is not afraid to drop the gloves when he needs to. Combine those elements with his offense, and he brings a lot to the table.

Wood’s age shouldn’t be forgotten, either. He’s only 23 years old and still has room to develop. If he takes another step forward, he has the potential to score 20-25 goals on a consistent basis. With him being under team control at the expiration of this deal, he could be a Devil for many years to come, too.

Despite the long negotiation, the Devils and Wood should be pretty satisfied with the end result. Wood ends up with a fair salary based on his production, while the team ends up with a contract that won’t hurt their salary cap, even if he remains a 30-35 point player. That will benefit the Devils’ ability to make any transactions in the future.