When the Tampa Bay Lightning put their playoff tickets on sale it came with one major stipulation, it was limited to Florida residents only.

I can easily see why the Lightning decided to do this. As it stands, these are the current matchups. The Lightning will be playing Detroit, one of many big market teams who at the moment will be seeing playoff action. 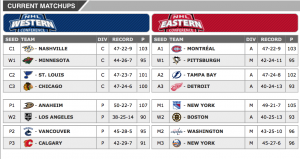 Big market teams means high ticket prices at the home arena and many fans seeing coming to Tampa as a better option. Why not? They get a vacation and a hockey game out of the deal. Any chance I got take a hockey vacation and I jumped at it.

During my year as a Lightning Season Ticket Member I got to see what it was like when these big market teams like the Rangers and the Canadiens came to town. It meant that the arena was taken over by the Blue Shirt Army or Habs fans. The latter being quite enjoyable to me being a misplaced Habs fan. Pour Toujours Les Canadiens, eh? Other Lightning fans did not feel the same way. Twitter likes to light up like a goal post when a rival away team is in the house. They overtake the arena, meaning that many Lightning fans who wanted to go the game couldn’t, and the hometown fans feel almost overtaken by the away fans.

The playoffs are a big deal. So limiting the playoff tickets to just Florida residents means that everybody who wants to go the game can go, and the remaining tickets can either get donated or given as Student Rush tickets. Smart. The arena will be filled with Lightning fans cheering their team on and hopefully not see another first round sweep like last season.

The question here is, will the ticket sales even come close to selling out the arena? Answer, probably not. While the fanbase has grown, the amount of people who will buy tickets to the game at the inflated playoff pricing will more than likely only fill up half of the arena. The playoffs are a time when you want the arena filled, and hopefully more with your hometown fans.

Having gone to playoff games in Pittsburgh where ticket prices aren’t as friendly as Tampa, the fans are pretty much cheering for the Pens. There is the odd away sweater every now and again, but in a Pittsburgh white-out it is just that, a white-out. The white-out is something to be witnessed in person, and what made me love my home team all the more.

It is almost discrimination in a way. If you do not cheer for the Lightning then you are not allowed to buy tickets or if you do happen to be an opposing fan who gets tickets, wear your opposing colours in certain places of the arena.

When you go to ticketmaster.com to buy your tickets you are greeted by this message.

If you happen to be lucky enough to sit in the Chase Club or Lexus Lounge, you MUST be wearing a Lightning sweater. If you are from the visiting team you will be asked to leave. This can mean that at some point in time ticket sales will open up to the visiting team. Having dealt with unruly away team fans, I can more than see the point in this. I have dealt with many obnoxious fans, and many people I know tend to get annoyed by how rowdy and rude they can be. That’s not to say home fans won’t get snippy as well, but limiting it to the home team only, especially during the heat of the playoffs can make sense.

Yet, to cut off sales to 49 states and all of Canada seems a little drastic. It means limiting not only the fans who can attend the game, but sales as well. For most games against a big team it is the away team that really helps to fill up the arena.

It seems that what would be the best bet for the Lightning would be to start selling tickets to the out-of-staters as the playoffs draw near. It gives Lightning fans a time to purchase their tickets and away fans the chance to purchase the remainder of the tickets.

This would definitely be the best option of the team, or to put a cap on the amount of tickets sold to away fans at the very least. The Nashville Predators are one of several teams that did these years ago when playing against the Blackhawks. They knew that Blackhawks came in droves to Bridgestone Arena and at their own arena, the chant ‘Go Hawks Go’ was overpowering. The presence can put a damper on how the home team plays.

At least limiting tickets to an entire state is better than limiting to a specific zip-code like the Washington Capitals did in 2009 when they played a series against the Pittsburgh Penguins. Now that is a little extreme if you ask me. What if I were a Caps fan but lived outside the Washington metropolitan area?

In all, I can understand why the Bolts wanted to limit their tickets to just Florida residents. It means that Bolts fans will fill up the majority of the arena, but as the playoffs draw closer it would be in their best interest to open up their tickets to out-of-state residents. For many, this is their only chance to see their team in the playoffs and they want to be able to have that chance. At the end of the day, the best thing for the Lightning to do would be to see how the first game goes. If they sell out to just Lightning fans, and away fans who live in Florida, great for them. If not, they learned their lesson the hard way and hopefully will sell second game and beyond to everyone.

On her previous stint with The Hockey Writers, Casey covered the Tampa Bay Lightning, but she has returned to take on the Carolina Hurricanes. Even though she is Steel City born, a former season ticker member with the Lightning, and lives in Orlando, the Canes have always been her favourite team. She started her hockey career as Keeper of Time for the California University of Pennsylvania Vulcan Hockey Club while going to school for Sport Management. She hopes to one day work with Hockey Ministries International as a team chaplain. You can usually find her tweeting about hockey or posting pictures on Instagram.