Having already experienced a number of different levels of the game in the Czech Republic, Ostap Safin would make an interesting second-round pick for an NHL club looking to add a big, multi-faceted forward.

Safin has the ability to play both center and the wing and utilizes his size to adapt to either position. The power he possess to hold himself off from defenders makes him a threat any time he has the puck. 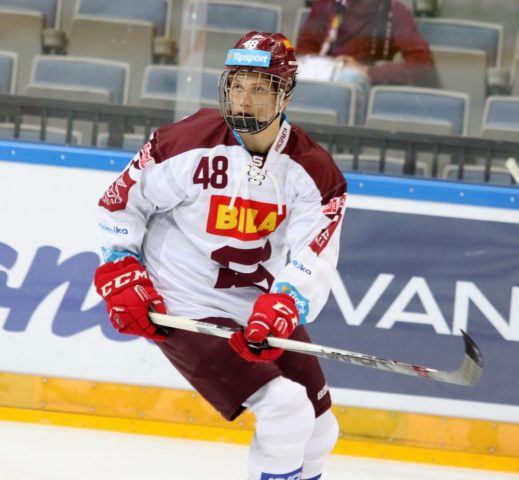 On top of that, he spent three games with HC Litomerice, but didn’t log any points. Finally, he played 16 games with the Czech international team at the under-18 World Junior Championship and Hlinka Memorial tournament. He notched seven goals and 12 points for his country over that span.

He’ll be a middle-of-the-pack pick in the second round. While this year’s draft isn’t nearly as deep as last year’s, Safin is projected to be a mid-second rounder with a high ceiling. Chances are he’ll hear his name called somewhere in the 45 to 55 range of picks.

“A competitive, 200-foot player that can fit in a power or finesse role. Skates very well, with balance and noteworthy speed, and handles the puck with ease and control at top speeds. Displays a dangerously accurate shot that he is never hesitant to use; always a threat in the offensive zone. Uses his frame well, to protect the puck, as well as to impose physically upon the opposition. Defensively stable and actively cuts off passing and shooting lanes. Could be more creative, but is more of a straight-line player. Potential is that of a top six forward that can complement similarly high-caliber players.” – Curtis Joe, Elite Prospects

“Big guy with great wheels who looks like he could have great potential once he fills out.”  – Brock Otten, OHL Prospects

His size and raw talent alone make him a potential top six forward. Now, add to that his level of competitiveness and Safin has the potential to be a dangerous player in the NHL.

While there isn’t really any major awards or achievements to note thus far in his hockey career, it won’t be long before Safin finds a way to add some worthwhile accomplishments to his list.