This isn’t the first time it has happened to us.  It keeps happening and we got to do something about it.  We [need to] learn how to close out the games, especially these close ones.  Two goal lead…they say it’s the worst lead in hockey and it proved to be for us.

– Zbynek Michalek after a 4-2 loss to Boston on Monday

PITTSBURGH – Exactly two months after a third-period collapse against Boston, the Penguins had a case of déjà vu by blowing a 2-0 lead against the same team and surrendering four goals in the final 203 seconds on Monday night.

Questionable penalties to Brooks Orpik and Jordan Staal in the final minutes of the game could be partially to blame.  In our Winter Classic preview we touched on the Penguins’ lack of discipline and how possessing one of the league’s top penalty-killing units has allowed them to mask a growing problem in recent weeks.

“We kind of got in penalty trouble and they got a big powerplay goal,” Alex Goligoski said.  “We can’t take a lot of penalties.  It seems like we’re getting a lot of penalties for whatever reason so that’s something that has to change.”  But it’s tough to blame penalties entirely for the four goal outburst.

What about lack of focus?  “I wish I could tell you [what went wrong],” Zbynek Michalek said when asked if he thought that was the reason.  “It’s not the first game we lost in the last five or ten minutes.  One bad bounce, one bad penalty, whatever it is we got to eliminate those mistakes from our game because it’s costing us a lot of valuable points.  It’s too hard to win in this league and we worked way too hard for 55 minutes to lose a game like that.  It’s so frustrating right now, but we’re going to learn from it and do something about it because it cannot keep happening like this.”

Michalek’s comments were echoed throughout the locker room in the aftermath as players expressed concern over the blown leads but didn’t seem to have any immediate suggestions on how to fix it.  In an attempt to make sense of the loss, it helps to first look back at what happened in November.

One month into the season the Penguins were just trying to stay in the Eastern Conference playoff hunt.  Their defensive core had been ravaged by injuries and Marc-Andre Fleury‘s usual confidence and swagger was nonexistent.  The loss to Boston was Pittsburgh’s sixth in eight games and Brooks Orpik decided to speak his mind.

One of the situations Orpik was referring to is this decision by Goligoski to try to keep the puck in the offensive zone with the score tied 4-4 in the third period:

Being aggressive on defense isn’t a huge problem for the Penguins.  In fact, the forecheck they’ve used the majority of the time against Boston this year is predicated on defensemen reading the play and stepping up at certain times just like Goligoski did.  What caught the ire of Orpik is that Goligoski (and others that night) weren’t reading the play correctly and it was resulting in odd-man rushes for most of the third period.

The Penguins Forecheck vs. Boston

Attacking an opponent in their defensive end, or forechecking, is a strategic part of the game that goes relatively unnoticed. A team can change their forecheck a number of times throughout the game depending on the situation or what the other team is doing to counter.

In the first episode of HBO’s 24/7 series, an opening scene showed Coach Dan Bylsma rattling off strategy details and the starting lineup for that night’s game.  “2-3 full pinch first time out, Kuny (Chris Kunitz) you ready to get on that guy? Good, ’cause you’re going.” 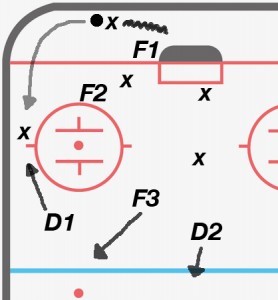 Bylsma likes his team to get off to a fast start and the “2-3 full pinch” he referred to is a pressure forecheck focused on creating turnovers in the offensive zone.  The first two forwards on the attack (F1 and F2) pressure the defenseman with the puck (Kuny you ready to get on that guy?).  Their goal is to hit the defenseman and force him to throw the puck around the boards to his winger, as shown in the diagram to the right.

When this happens, the Penguins have a group of three players (2-3) just inside the blueline ready to step up.  If F3 is closest to the puck then he is the first to attack, but if Kunitz is successful in forcing the play to the winger on the boards, D1 has the ability to step right up on him (full pinch).  The winger is looking the other way waiting to receive the puck while a defenseman is barreling down on him from the blind-side…it’s a turnover waiting to happen.

In both games against Boston this season the Penguins have utilized the 2-3 forecheck.  But one of the biggest keys to it working is F3 needs to be in position to cover for D1 when he decides to pinch.  D1 should be reading the situation, and if he doesn’t have a forward covering for him then he should back up and play safe defense as usual.

In the highlight above from the November game, Goligoski (D1) didn’t have a forward (F3) in position and that probably led to his indecisiveness.  When he finally decided to jump up anyway and the puck got chipped around him, Boston had a 2-on-1 going the other way resulting in the winning goal.  These are the misreads Orpik was referring to.  If F3 isn’t in position, the defense has to drop back and play it safe – especially with a lead in the third period.

After a stern lecture from Orpik (and likely from the coaches as well), the mindset of the team heading into the third period of the rematch with a 2-0 lead was predictable.  “We wanted to play our game, get the puck deep, and make sure our F3 stays back and doesn’t give them any odd-man rushes,” Michalek said after the game on Monday.

Bylsma echoed the same sentiments when asked about his mindset for the team going into the third period.  “We always should have a responsible F3 and defensemen making the reads on when to keep the puck in and when to back up and allow F3 [to attack instead],” he said.

But with the November collapse in the back of their mind, the Penguins ended up playing the third period too safe.  “We talked about how we wanted to play the same way as we did in the first two periods,” Michalek said.  “For whatever reason we didn’t.”

After getting 23 shots on goal in the first two periods they had just 2 in the final frame.  According to Bylsma’s numbers, the team didn’t even have a single scoring chance in the third period.  When F1 and F2 pursued the puck and forced it to the winger just as they were supposed to, no one wanted to pinch and make a mistake.  All three players at the blueline immediately began to back up and it allowed Boston to easily move the puck up ice and go on the attack.

This is what happens psychologically to a team that can’t seem to hang onto leads in the third period.  On the Penguins post-game radio show, Bob Grove dug up a statistic that the team has allowed the most third period goals at home in the NHL this season.  For Pittsburgh to still have one of the best records in the league, that’s hard to believe.

Just like a team who comes from behind on a regular basis gains the confidence that they’re never out of a game, at some point the Penguins will start to wonder if any lead they get is safe.  That mindset is a dangerous one to have in the playoffs and it’s tough to say what this game will do to the psyche of a team that’s win-less without it’s leader Sidney Crosby.

When these teams face off again on Saturday in Boston, ‘Kuny’ will be ready to go and get on that guy…it’s how the rest of the team responds that will be interesting to watch.