Dougie Hamilton was traded to Calgary back in June, but remnants of his presence will remain on the Boston Bruins’ salary cap ledger next year.

The Bruins lead a list of nine teams expected to incur penalties for exceeding the salary cap last season. Hamilton earned a maximum $850,000 in performance bonuses on his entry-level contract last season and contributed to most of the Bruins’ $969,000 overage. That penalty will be applied to the 2015-16 season.

Under the CBA, teams are allowed to exceed the salary cap during the season by 7.5 percent as a result of potential performance bonuses.  The catch: if the team ends up exceeding the cap at year-end due to earned bonuses, the overage is carried over as a penalty the following season.

The Stanley Cup Champion Chicago Blackhawks also paid a price for their title. The Hawks acquired Kimmo Timonen from the Philadelphia Flyers in exchange for a second-round pick and a conditional pick that also ended up being a second-rounder.

The Bruins and Blackhawks are no strangers to the cap overage penalty. Both teams have been crippled by multi-million dollar overages in recent years.

Here are the nine teams expected to deal with penalties next season, according to data and calculations we’ve captured on the team pages over at war-on-ice.com: 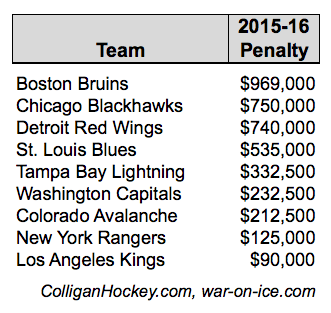