After a grueling three game series against the St. John’s IceCaps in Newfoundland that resulted in a 2-1 overall loss by the Pirates, the boys get ready to face the Norfolk Admirals Friday night.

The Pirates and IceCaps faced off for three games in three days, after a change in schedule was made due to travel and weather concerns.

Sunday night, Mark Visentin and Eddie Pasquale began in net for Portland and St. John’s respectively. The game resulted in Visentin blocking 37 of 40 shots, and Pasquale blocking 30 of 31, leaving the final score 3-1 IceCaps. Scorers for St. John’s were Adam Lowry at 1:03 in the second period, assisted by J.C. Lipon and Carl Klingberg, Brenden Kitchton at 2:51 in the third, with another assist by J.C. Lipon, and Jerome Samson, unassisted at 14:29 in the third. The lone goal for Portland was scored by Andy Miele, his 14th of the season, assisted by Brandon McMillan and Brett Hextall.

Monday night was a different story for the Pirates, and they were able to pull off a 5-4 win with Louis Domingue starting in goal, and Jussi Olkinuora in net for the IceCaps. Bret Hextall was the first to score in the first period, finding the back of the net at 8:03 with help from Jordan Martinook. Tobias Rieder scored two minutes later with an assist from Brandon McMillan, giving the Pirates a 2-0 lead halfway through the first period. J.C. Lipon got the IceCaps on the board at 18:27 in the first, with assists by Adam Lowry and Brenden Kitchton.

Four goals total were scored in the second period – one by St. John and three by Portland. Will O’Neill scored on a power play for the IceCaps at 5:55 into the second with assists from Kael Mouillierat and Kris Fredheim. The next three goals went to Portland, and were scored Lucas Lessio (PPG) at 12:45, assisted by Daine Todd, Mathieu Brisebois (PPG), assisted by Randy Jones and Tobias Rieder at 13:46, and Mark Louis at 16:13, assisted by Brandon McMillan and Randy Jones, putting the Pirates up 5-2.

The IceCaps attempted to fight back, and scored the only two goals in the third period, with John Albert and Kael Mouillierat credited with those goals, to finish the game with a score of 5-4 Pirates.

Louis Domingue and Eddie Pasquale began in net Tuesday night; Domingue again for Portland and Pasquale for St. John after a night off. Unfortunately, the Pirates fell to the IceCaps again, this time 4-2.

The Pirates were the first team on the board after a goal by Lucas Lessio, assisted by captain Jordan Szwarz, found the back of St. John’s net at 14:25 in the first, giving the Pirates a goal advantage for about five minutes until Ben Chiarot of the IceCaps scored with six seconds to go before the first intermission. Carl Klingberg had the only goal of the second period, scored at 9:21 and assisted by John Albert and Zach Redmond, giving the IceCaps a 2-1 lead before the last 20 minutes of play began.

The IceCaps were the first to score in the third period with a goal from Andrew Gordon at 3:45 into the period, putting the IceCaps up 3-1, now having scored three unanswered goals against their opponents. Portland struggled to fight back, but Tobias Rieder scored at 6:24 with assists from Brett Hextall and Brandon Gormley, closing the two goal gap. Unfortunately, Portland pulled their goalie in an attempt to add some extra force up front, but St. John was able to score an empty netter, and the final goal of the game, credited to Klingberg with less than thirty seconds left in the third. 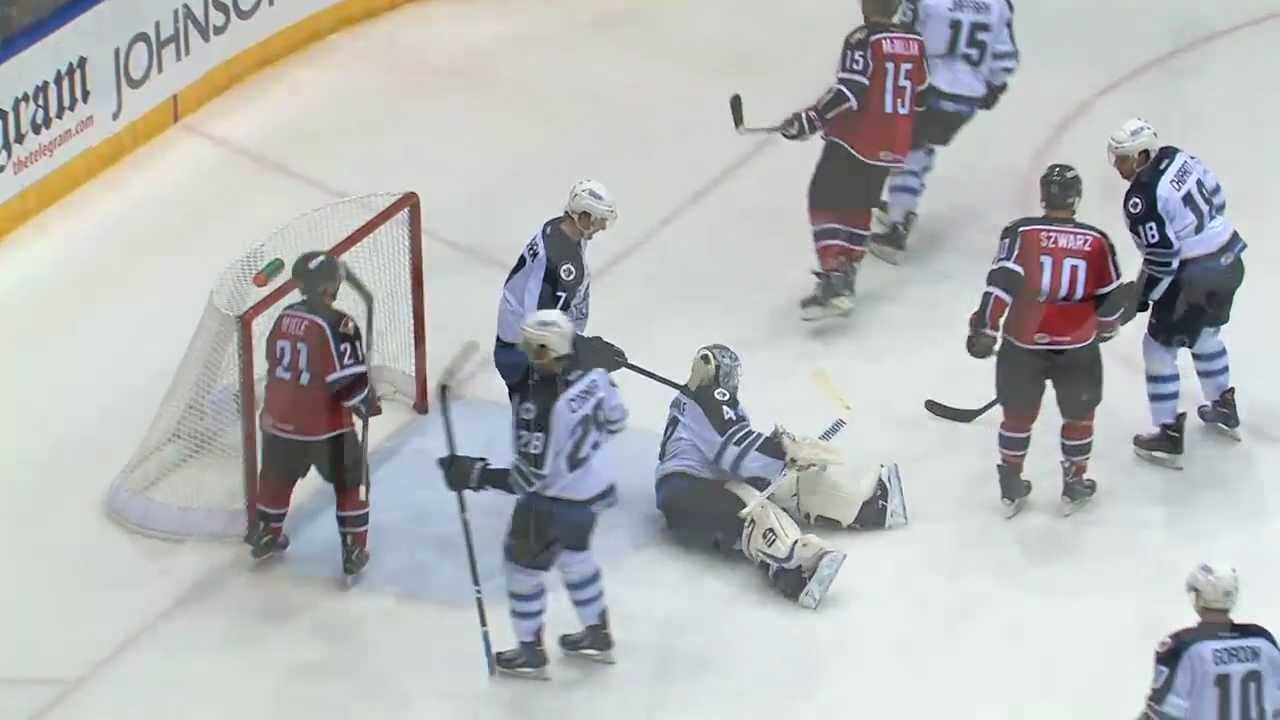 Up Next for the Pirates

The Pirates sail (well…fly and drive) home with a record of 14-13-1-4 to prepare for Friday night’s match against the Norfolk Admirals (18-12-1-4), the first time the Admirals will make the trip up to Maine since 2011. Friday night’s game also kicks off another weekend of hockey for the Pirates, as they’ll play another three games in three days. After they face-off with the Admirals, it’s back to the road again for a game against the Bridgeport Sound Tigers, and then again on Sunday in Worcester against the Sharks.

L.L. Bean has also partnered up with the Pirates and the Androscoggin Bank Colisée to coordinate a series of community skates following select Pirates home games.

The first @LLBean community skate is Friday after the game! LL Bean will have prizes & more! http://t.co/Kgvb49OVy0 pic.twitter.com/aZJSJzuIkY

Bring your skates to Friday night’s game to hit the ice after the battle, or rent them at the rink for $3.