Constructing an opening day roster for any team can be challenging.  When the salary cap drops from a pro-rated level of $70.2 million last season to $64.3 million in 2013-14, the challenges are only magnified.

Aside from Ruopp, surprising inclusions on the opening day roster include Chris Conner and 2012 first round pick Olli Maatta.

What does it all mean?

The seven moves were reminiscent of the Penguins’ cap shuffle with Jordan Staal and Eric Tangradi in 2010.  Tangradi’s demotion to Wheeling (instead of Wilkes-Barre) set off alarm bells amongst the fanbase.  But the devil was in the details.

Botterill was back at it again on Monday with Vokoun and Bennett playing the roles of Staal and Tangradi — only this time with a slightly different twist.

Last week we looked at the injury to Vokoun and how his absence would impact the team’s cap situation, specifically as it relates to the long-term injury exception.  Assuming Vokoun is out for an extended period of time, Pittsburgh had two options:

The latter method is how Staal was handled three seasons ago.  LTIR designations are rarely reported publicly, but Monday’s moves indicate that the team almost surely decided to go with the first option this year: start with Vokoun on LTIR in order to maximize salary cap flexibility.

Below is an in-depth breakdown of the Penguins’ salary cap situation as of Monday evening.

The same disclaimer from ‘Tangradi 2010‘ still applies: For readers with no interest in the intricacies of the CBA or made queasy at the sight of a calculator, proceed with caution.  ‘Vokoun 2013’ will be mentally taxing.

NHL teams are permitted to have 23 players on their active roster for Opening Day.

The long-term injury exception is an additional option for players expected to miss at least 10 games and 24 days.  Depending on when the declaration is made, LTIR allows the team to exceed the salary cap by a certain amount.

As we reviewed last week, LTIR relief to exceed the cap is calculated by taking the player’s salary and subtracting the available cap space at the time of the designation.

So where do the Penguins’ stand after the seven roster moves, and how can we tell if LTIR was taken on Vokoun yet or not? 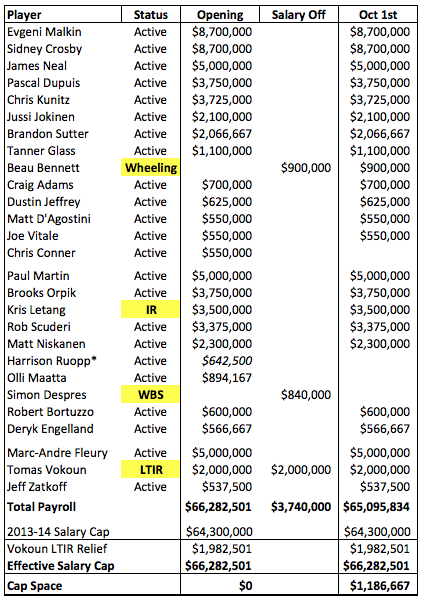 In Scenario 2 of last week’s Vokoun article, we described how the Penguins’ could aim to get as close to $2 million over the cap through creative reshuffling and designate Vokoun for LTIR on their opening roster in order to get compliant.  This seems to be the option the team has chosen.

Recall the equation described above:

~One common question in the aftermath of Monday’s activity is why did Bennett report to Wheeling while Despres was sent to Wilkes-Barre if the moves are only temporary?

Both players are not required to clear waivers in order to be demoted.  Pittsburgh can also assign both players to the ECHL without their approval because they are on entry-level contracts.  The Tangradi situation reminded us that Wheeling is only 60 miles from Pittsburgh while Wilkes-Barre is about 260.  If a player is only being demoted temporarily, a quick down-and-back to Wheeling makes more sense.

Assuming the info above is true, we can conclude that Bennett will be returning to the Penguins tomorrow while Despres will remain in the AHL for the time being.

~Capgeek enthusiasts might also notice that Harrison Ruopp’s cap hit above does not match what is listed on the salary cap tracking website.  This is because Ruopp’s cap hit on the site includes $282,500 in bonuses.  In an effort to limit complexity, we can just assume these bonuses do not come into play in our calculations.  (You can read more about bonuses in the NHL here)

~Conner and Maatta were two surprises on the opening roster.  While Ruopp and Conner will almost surely be demoted on Tuesday in order to clear space for Bennett’s return, Pittsburgh has flexibility with Olli Maatta.

Maatta is able to play nine games at the NHL level without burning a year of his entry-level contract.  But if and when the Penguins decide to demote him, Maatta must return to his junior team in London (OHL).  CBA restrictions do not allow him to play in the AHL or ECHL.  It’s all or nothing.

~The conclusion to the Vokoun article ended up coming true:

There are a number of possibilities, but the Penguins are best served to wait until the last possible minute to make a decision.

Judging by the Penguins’ luck over the past few seasons, the injury to Vokoun might only be the beginning.

Whatever plans Botterill and the Penguins’ had in store for opening day were thrown into the trash with the injury to Letang over the weekend. A healthy Letang would’ve meant a totally different shuffle and perhaps a different approach to the Vokoun LTIR designation.

The most likely scenario would see Conner and Ruopp returned to Wilkes-Barre on Tuesday morning.  Conner has already cleared waivers and can be assigned at any time, while Ruopp does not need to clear waivers to be demoted.

These moves would be accompanied by an official recall of Beau Bennett from Wheeling.

If the Penguins decide to keep Maatta as a seventh defenseman for the time being, they will not have room to sign camp tryout Chuck Kobasew.  Rob Rossi at the Pittsburgh Tribune-Review reported that Kobasew and the Penguins were not able to agree to terms as of Sunday.  The above scenario would not have permitted Kobasew to be signed on Monday, but a Maatta demotion on Tuesday could clear roster and cap space for Kobasew to join the team.

The Oct 1 column above shows that the Penguins would have approximately $1.2 million available (without taking LTIR on Letang).  Of course, this only applies temporarily if Vokoun is expected to return this season.  At that point, the Penguins would need to shuffle once again in order to become cap compliant.