This offseason wasn’t an easy one for NHL general managers. The expansion draft forced many to make hard decisions, and none had a harder time than Nashville Predators GM David Poile. He had to make a decision to protect either Calle Jarnkrok or James Neal, both of whom were key contributors during the Stanley Cup Final run. The news finally broke that Nashville would protect Jarnkrok over Neal, and much civilized discussion took place where everyone was polite and accommodating.

Just kidding, people were jerks and no one would take an objective look at the pros and cons of each side. I was firmly on the Jarnkrok side as the Predators had no real second-line centers to back up Ryan Johansen, as Mike Fisher would retire. David Poile made the tough decision to sacrifice a scoring winger to save a shutdown centerman.

Since then, every accomplishment of Jarnkrok’s was then immediately compared to Neal’s—quite unfairly, I might add. Although the two are very different players, both are having successful seasons in their own right. Jarnkrok is having an awesome season and stepping up in every way that the Predators need, so let’s dive into his accomplishments.

Jarnkrok is the ultimate utility player, as many in Nashville know him as the Swedish Army Knife, due to his versatility. The center/winger hybrid makes a cool $2 million per year till 2021-22, and he earns it. He plays in defensive situations, kills penalties, plays on the power play when a regular is injured, and faces top six talent every night.

It’s a thankless job, but someone has to do it. Jarnkrok does it and makes it look almost easy. He acts like a third defenseman on occasion, and his communication with P.K. Subban and Mattias Ekholm is a sight to behold. The three make board battles look like art as they seamlessly separate the puck from the opposition. To see just how good Jarnkrok has been, let’s look at the numbers.

While Jarnkrok had a lot of offensive potential early on in his career, his first few years in Nashville changed him. He focused on a more well-rounded game and it molded him into a key piece of the Predators. Now, even though he’s facing top-six talent, Jarnkrok is still on pace for a career year. He has 13 goals and 27 points in 54 games, with 20 of those points coming at 5-on-5. He’s on pace to break his career highs in goals and points, 16 and 31, respectively. Jarnkrok is also one of the better faceoff takers on the team, as he wins 51.63 percent of them.

The main concern that many had with keeping Jarnkrok over Neal was the loss of offense, but that issue seems long gone now. The play of Kevin Fiala, the re-emergence of Craig Smith, and the overall play of the Predators has more than made up for what they lost in the expansion draft.

Gettin’ Fancy With It

Calle Jarnkrok is an advanced stats darling, as it’s one of the few places where we can see his true impact on a team. For reference, I’m using unblocked shot attempts (Fenwick), high-danger chance percentage (HDC%), high-danger goal percentage (HDG%), and offensive zone start percentage (OZS%), with all stats coming in 5-on-5 situations. 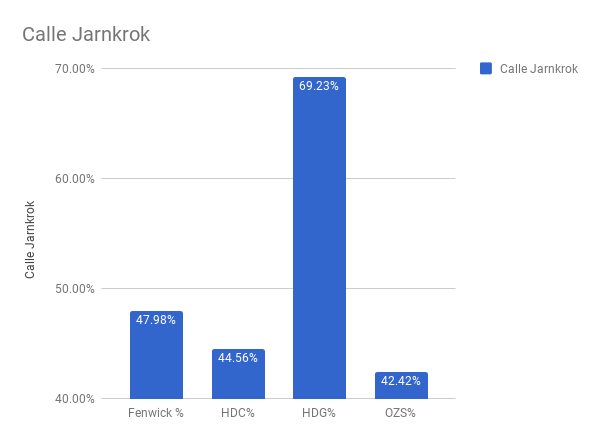 To make things simple, there are two good stats and two bad stats. Let’s start with the bad—more specifically, the Fenwick. Jarnkrok has always hovered around a 50-percent Fenwick, and this year isn’t really different, except that he ended the first 30 games with a Fenwick around 44 percent. His play is getting better, and while it’s not average yet, he’s trending up. His high-danger chance percentage is the exact same way; it used to be in the 30s but it’s getting better. This is most likely due to some stellar play from his newest linemates, Nick Bonino and Scott Hartnell. Bonino and Hartnell may not have helped as much on the defensive side, but they bring an offensive touch that Jarnkrok does lack.

Now, an excuse for the bad stats we just talked about: his offensive zone starts are in the bottom five on the Predators. Peter Laviolette is continuously thrusting Jarnkrok into the most dire situations, and Jarnkrok seems to thrive. While he gives up more high-danger chances than he produces, Jarnkrok absolutely shuts down goals from that area. We’ll get into the specific numbers in a minute, but the percentage tells a lot of the story. Jarnkrok is simultaneously great at getting to the high-danger areas while keeping players neutralized in his own zone.

Let’s take a look at how Jarnkrok stacks up against the best of the Predators. To be eligible for this comparison, the other player would have to play over 30 games or 350 minutes; otherwise, it’s just not fair. For reference, I’m using goals against and high-danger goals against (HDGA), both at 5-on-5. 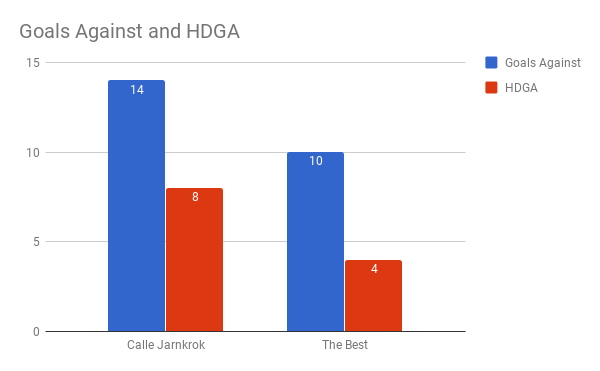 For goals against, Jarnkrok finished tied for third on the team, behind Pontus Aberg and Yannick Weber. Here’s the thing though: Weber has played 22 fewer games than Jarnkrok while Aberg has played 18 fewer games. I feel as if it’s safe to say that both of those players would give up more than four goals if they had played their way to 54 games. The next closest player who has played 50 or more games is Austin Watson, with 18 goals against in 52 games. Over four more goals with two fewer games played.  Even with his lack of sheltering, Jarnkrok is still heads-and-shoulders defensively better than any other Predators forward.

Can Jarnkrok Keep It Up?

Honestly, I think he can. There’s nothing to show that he can’t and his underlying numbers are completely sustainable. His shooting percentage may be a bit high but his defensive numbers look great. Jarnkrok will be counted on more and more as the playoffs go on and scoring goes down. I’m excited to watch him conclude the season, as I think he’ll do so in excellent fashion.