Two teams with a poor save percentage will battle it out in Winnipeg as the Jets take on the St. Louis Blues.

The Blues are coming off a brutal 7-3 loss to the Washington Capitals where Jake Allen got pulled twice in the same game. That marks the fourth time he has been pulled in six games and he did not travel with the team to Winnipeg. Instead, Pheonix Copley was called up and start his first NHL game.

Blues general manager Doug Armstrong said, “We’re going to give him a day to reset,” going on to explain that he expects him back in the net on Sunday. Allen has a .897 save percentage this season, which ranks him 44th among goalies who have played more than 14 games. Carter Hutton hasn’t been good either, holding a .892 save percentage, putting him at 48th in the league.

The Jets ended a four-game losing streak against the Arizona Coyotes on Wednesday, defeating the Coyotes 6-3. Pavelec made his first start of the season, making 30 saves on 33 shots. He gets the call again for the Jets as management continues to give Hellebuyck a rest. Hellebuyck has a .907 save percentage on the season, and while that’s better than the Blues goalies, still sits 32nd in the league.

Despite the goaltending struggles, this could be a close and low scoring game. The last two games between these two teams have seen a combined eight goals, both games going into extra time.

1) Goaltending is once again the story of this game. Both teams have struggled between the pipes and both teams are carrying three goalies now to try to figure it out. Pavelec will get the start for the Jets, making this the second start of the season for him. Copley will be guarding the other end of the ice. These teams both have the firepower to make this a high-scoring affair, but these two teams typically suffocate each other when they play. If one or both of the goalies aren’t on their game, expect a lot of goals. 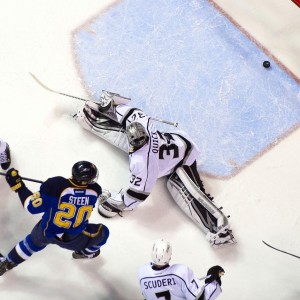 2) Alexander Steen is pacing the team, scoring five goals and picking up seven assists in his past nine games. Steen has 30 points this season, tied for second on the team behind Tarasenko.

3) The Jets have had a lot of success against the Central Division this year. They are 5-0-0 at the MTS Centre and have outscored Central rivals 23-4, which includes two shutouts. Overall, the Jets have won five straight against divisional opponents.

4) Good news for Jets fans (and potentially bad news for everyone else). Patrik Laine was skating with the team, wearing a yellow non-contact jersey. Laine recently said that he doesn’t remember the hit, but is recovering well and could potentially be back by next week. Laine could join the Blues’ Tarasenko at the All-Star Game if he recovers in time.