The Rangers made a swap of tough guys, sending winger Mike Rupp to the Minnesota Wild in exchange for defensive-minded forward Darroll Powe. With that trade, the Blueshirts boast a league-high two alumni from Princeton University in their lineup – Powe and center Jeff Halpern. Four former members of the Princeton Tigers are currently playing in the NHL:

Halpern scored 60 goals and 82 assists in 132 games with Princeton, making him the third-highest scorer in team history. The former Tigers captain went undrafted; he was signed by the Washington Capitals after graduating. Halpern spent time in Dallas, Tampa, Los Angeles, and Montreal before joining the Rangers prior to the start of the 2013 season. 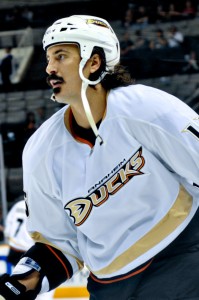 Parros was the team captain for a very tough 2002-03 season. Princeton finished the year with a record of 3-26-2, their worst season in over thirty years. Parros was drafted in the eighth round, 222nd overall, by the Anaheim Ducks in 1999. He became the first Princeton alum to get his name on the Stanley Cup when the team claimed the league’s championship in 2007.

Powe led the Tigers in goals scored during his senior year, when he also served as team captain. Like Halpern, he went undrafted, later signing with the Philadelphia Flyers. Powe spent three seasons in Philadelphia before signing with the Minnesota Wild for the 2011-12 season. He was traded to the Rangers in February 2013.

Westgarth suited up alongside Darroll Powe in the orange and black of Princeton from 2003-07. Like many of the Princeton grads that preceded him, he went undrafted. Westgarth signed with the Los Angeles Kings. He played two seasons with their AHL affiliate, the Manchester Monarchs, before making his NHL debut in 2008. He became the second Tiger to get his name on the Cup when he won it with the Kings in 2012. Westgarth was traded to the Carolina Hurricanes just before the start of the 2013 season.

Two of the Princeton-educated players put their college years to good use in helping work out a new contract with the league. Both Parros, an economics major, and Westgarth, a psychology major, were integral parts of the negotiating sessions between the Players’ Association and the league that resulted in a new Collective Bargaining Agreement.

Tigers in the Pipeline

There are also a handful of alumni working hard at lower levels to try to make it to the National Hockey League. Mike Moore, Class of 2008, is currently with the Nashville Predators organization, playing with the AHL’s Milwaukee Admirals. The former Tigers captain has one career NHL goal, scored back in 2010-11 when he played 6 games with the San Jose Sharks. Cam MacIntyre, Class of 2010, spent two years with San Jose’s AHL-affiliated Worcester Sharks but has yet to play a game in the NHL.  He’s currently an unrestricted free agent. (Thanks to SharksPage‘s Darryl Hunt for the update.)

Michael Sdao, the only current draftee on the Tigers’ roster, has 12 points – six goals and six assists – in 21 games this season. The senior defenseman was selected in the 7th round of the 2009 Entry Draft by the Ottawa Senators.

Former Princeton Players in the NHL

While the Princeton Tigers may not have a lengthy list of NHL players that have passed through their suburban New Jersey halls, they have a few who’ve made an impact. The first was Syl Apps, Jr., son of the famous Maple Leafs center, who played his freshman year at Princeton. Apps went on to score 183 goals in 727 games with the Rangers, Penguins, and Kings in a ten-year career that ended in 1980. Forward Ed Lee made it into two games with the Quebec Nordiques in the 1984-85 season, but made little impact with no points and a -4 rating. He did manage to drop the gloves, throwing punches with Edmonton’s Kevin McClelland. Left winger Andre Faust spent two years with the Flyers (1992-94) where he scored 10 goals. He was the first Princeton graduate to score a goal in the NHL; Apps, who’d scored first, only played one season there. Faust faced off against classmate Mike McKee, then a defenseman with the Quebec Nordiques, in the 1993-94 season. McKee played 48 games, scoring three goals and 15 assists. It was eight years until another Princeton alumnus played in the NHL. In 2001-02, winger Chris Corrinet suited up for eight games with the Capitals, posting just one assist.

Fellow Ivy Leaguers Across the League

While Halpern, Parros, Powe, and Westgarth were the only four Princeton alumni to start the season in the NHL, they were joined by fifteen other former Ivy League players. The Penguins sported Craig Adams from Harvard alongside Tanner Glass and Ben Lovejoy, both from Dartmouth. Three other Eastern Conference teams have Ivy League alumni – Ottawa’s Colin Greening, Toronto’s Ben Scrivens, and Matt Moulson of the New York Islanders all played at Cornell.